Francis Manapul and Brian Buccellato begin their journey into the world of Gotham with Detective Comics #30 letting the readers know flat out “It’s a new start.” And what a start it is. Manapul and Buccellato take us from a hostage rescue to the streets of Gotham for a non-stop hold your breath chase scene. 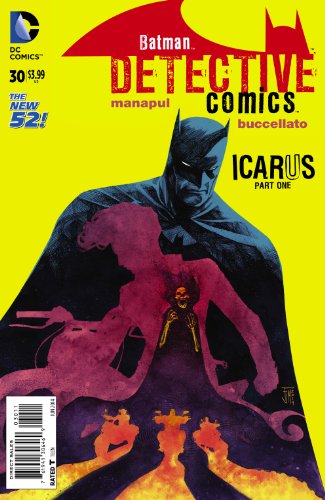 The co-artists/co-writers do an excellent job of conveying the emotions and attitudes of the characters, not only through their facial expressions, but also in the characters’ body language. The reader is easily able to recognize a range of emotions from fear to smugness. The author-artist combo do a superb job with the lighting of each panel that helps enhance the emotions the characters are feeling as well as the mood of the panels.

However, the detail in the characters wasn’t the most impressionable part of the artwork. Gotham hovering in the background of every page is vibrant. People are milling around, moving from shop to shop. Gotham is very much alive.

Readers are introduced to Elena and Annie “The Eagle” Aguila. A tried and true Batman theme unfolds as Bruce Wayne negotiates a deal to improve a destitute and downtrodden area of Gotham with his vast wealth, but if only negotiating such a deal were so easy in Gotham.

Manapul and Buccellato only give three pages to introduce the villains, which raises many questions and answers little to none. Mr. Squid, in particular is ruthless and his name appears well deserved, but there is little back story fleshing his character out.

The book has very hard transitions jumping straight from one scene right into another, leaving it up to the reader’s imagination to fill in the gaps.

It takes almost the entire book but Alfred finally makes an appearance, but it is well worth the wait. Alfred is able to connect on such a deep emotional level with Bruce both through dialogue and the artwork it weighs down this reviewer’s heart.

The end of the book leaves the reader questioning what exactly happened. One might think this would be a negative, but it is Detective Comics and sets the stage wonderfully for the world’s greatest detective to prove he can live up to the title.

Detective Comics #30 is a good start for Manapul and Buccellato. They introduce a number of new characters begging to be fleshed out at the same time leaving readers with a sinister plot only the world’s greatest detective could solve.

Excellent artwork combined with great dialogue really convey the emotions of the characters, however the hard transitions and lack of character development especially of villains weakens an otherwise great book.