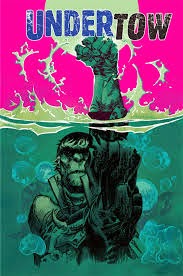 Steve Orlando and Artyom Trakhanov pack a fist full of action and philosophy and even a dash of romance into the opening book of the series. The story opens with a very tranquil scene with seagulls flying over the open ocean, but the façade of tranquility is quickly erased when chaos breaks out. Atlanteans are being shot, stabbed, and killed. Trakhanov’s artistic style really dramatizes the chaos with blood flowing freely. Providing contrast to the vividly violent scenes are Orlando’s use of what can only be described as journal entries. The opening entry describes Ukininu Alal’s path from a seemingly comfortable life to the roaring chaos around him.
The book transitions from Ukininu Alal and the brutal horrors of battle to Redum Anshargal, and an exploration of the harsh world of Undertow. The transition scene is wonderfully drawn, depicting Anshargal as an almost god-like figure with Trakhanov giving nods to Michelangelo’s Sistine Chapel.
The world of Undertow is unforgiving from roving packs of pre-humans hunting like a pack of wolves to giant vultures preying on the unsuspecting. Orlando’s journal style is again front and center although he switches to a different character which was a tad difficult to catch onto despite a different tone. Regardless of the challenge of deciphering the two tones, the differences in the journal entries set the stage for a world-breaking conflict in the world of Undertow.
Now that a possible major conflict has been identified, Orlando has to find a way to move toward this conflict. He does a brilliant job of doing just that by applying the harsh world and daily challenges of survival to motivate Anshargal and the citizens of The Deliverer to adapt and overcome. They have already made enormous strides in overcoming the bare necessities. The citizens of The Deliverer have discovered how to grow open-air crops, harnessed solar power and bioenhancement and most importantly developed Apergy, an anti-gravity energy used to sustain flight and power extremely dangerous and deadly weapons.
However, they have not been able to conquer one of their largest natural threats, Air. The pursuit of discovering the mystery to breathe air leads our heroes on an exciting mission where the danger of Undertow (both philosophically and literally) is all around them!