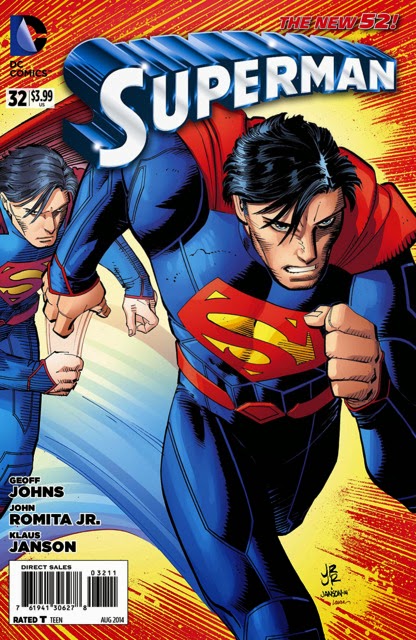 Superman #32 written by Geoff Johns with penciling from John Romita Jr. and inking by Klaus Janson begins with a very familiar opening act. A class five hazardous leak at the Ulysses Research Center is occurring and a couple and their newborn son are attempting to flee the inevitable. Unfortunately for them, they are doomed to die, but their son is able to escape! He is even sent to a world where he will look like the native populace, but won’t be one of them. Sounds familiar right? Looks like Superman, sounds like Superman right? Wrong. The young newborn’s name: Neil.
Don’t worry our title character makes a smashing debut right into the face of a giant mechanical ape-creature named Titano. The artwork on Titano by Romita is detailed down to the last bits of wire flying from his bludgeoned head. The look of Titano definitely seems inspired by one Arnold Schwarzenegger as the Terminator.
Johns transitions nicely from high-flying action to give a newsroom setting, where he gives a little life lesson. A young aspiring photographer, who happens to have inherited millions from his mysterious parents, is trying to pitch the sale of a very shoddy photograph of the Man of Steel. The life lesson comes despite our aspiring photographer having millions of dollars; he is pursuing his own dreams, though it may be met with failure. It will be interesting to see how Johns further develops this character.
The reader gets their first look at Clark Kent and he’s at the Daily Planet, where Johns and Romita’s art intertwine some history of the Superman comic world, to give new readers (like this reviewer) some footing to stand on. Point in hand, there is a poster declaring Lex Luthor has Saved the World!! The story jumps around a little bit from here, Clark (in altogether different attire) arrives at his apartment from the grocery store, there is one panel of Lois in a bar, and one with our aspiring photographer meeting with lawyers. The reader is definitely taken for a little bit of a roller coaster ride.
The story gets back on track, when Superman answers the call to save Metropolis! The action sequence is exhilarating, and Geoff Johns and Romita even add a dash of the sinister with a one-framer from an on-looking villain. The battle rages on filling up eight whole pages. The aftermath isn’t surprising giving the lead-in, but Johns does a good job of piquing not only the reader’s interest but Superman’s as well. The question is: Who is Ulysses?