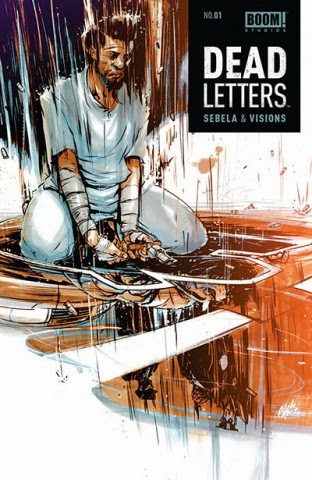 Combining the Bourne Identity with a mob war and mythological overtones gets you a fantastic comic in Dead Letters #1. Writer Christopher Sebela has the reader craving more from the very start. Our protagonist, Sam, has lost his memory and is plunged into the action-packed world of Dead Letters.
And is the world ever action-packed, Sebela moves straight into a chase scene with bullets flying, fast cars and adrenaline-fueled leaps of faith. All the while the reader is exposed to Sam’s thoughts as he attempts to make sense of the chaos around him. The most important part of the sequence is the reader’s ability to connect to Sam. He isn’t a caped hero, he is very human – and extremely resourceful.
Sebela does an excellent job of allowing the reader to connect with Sam by writing a majority of the book through Sam’s stream of thoughts. Certain situations allow him to recall how characters may react, other times objects may trigger specific memories. If Sebela hasn’t already hooked you with the almost non-stop action combined with Sam’s self-discovery, he adds a curve ball, which blows the story wide open.
Sebela’s story is so engrossing; one might even glance over the fantastic art by Chris Visions. His artistic style is gritty conveying a very tough world, although there are a couple of panels which convey the complete opposite and portray a more idyllic life where folks are washing their vehicles in the driveway or enjoying a meal at the local diner. Visions does a great job of capturing the style of the denizens. They wear varying degrees of attire from MIB-type suits and shades to a pair of shorts and a t-shirt. However, the bad guys are very distinctive. Their fashion is reminiscent of early 20th century, with stylish bowler hats, fancy cigarette holders, and fur coats. Meanwhile Sam wears a raggedy bluish-white t-shirt and bluish pants with bandages on his arms as if he was just released from the hospital. Visions with the help of Ruth Redmond’s colors reinforces Sebela’s writing and portrays Sam as the human he is. Redmond’s colors bring the comic to life and reinforce the mood Sebela has created.
One of the more interesting parts of the book is the type of paper they use. The texture is fantastic and helps add to the feel Sebela has created.
Dead Letters #1 introduces the reader to Sam and his action-packed adventure filled with mob warfare, backstabbing, an epic chase sequence and most importantly a mystery about not only who he is, but where he is.