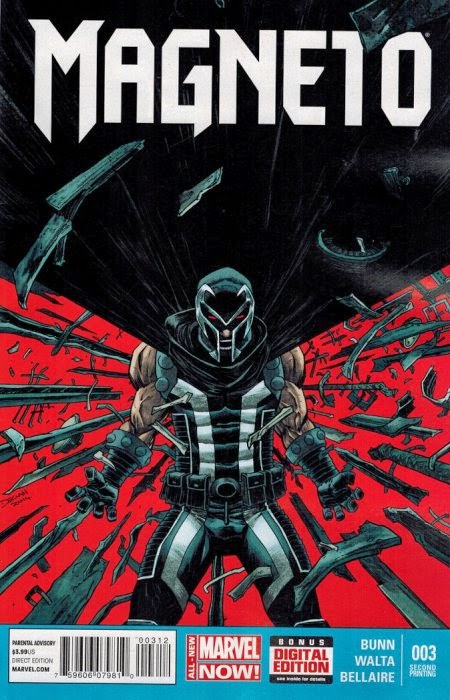 Cullen Bunn once again begins the story with S.H.I.E.L.D. agents at the scene of Magneto’s latest encounter, still two steps behind. He does take a turn with how the story the witness is telling. The witness does not depict Magneto as a fearsome and terrible person, but instead the S.H.I.E.L.D. agents are depicted as the wrong-doers since they are forcibly removing the witness from his home. It is an interesting change of direction and sets the tone for the rest of the book.
After the short introduction with the S.H.I.E.L.D. agents, Magneto takes center stage as he continues on his hunt. His mission is front and center with Bunn laying it out as plain as day. Magneto is “here to bring it all down.” Fortunately for the reader, Magneto has not fully recovered his powers but channels Solid Snake, breaking into a secure facility undetected. Gabriel Hernandez Walta does a great job of displaying Magneto’s wide range of uses for his ability. A metal fence is torn, the security system is disabled, and an elevator shaft is manipulated among other things as Magneto infiltrates the facility. The scene actually reminds the reader of the Mission Impossible movie when Ethan Hunt is breaking into Langley!
However, Magneto is not there to steal a NOC list, he is there to destroy. Motivating him is a haunting memory of one of his massive failures. He must stop the threat at all costs in order to prevent such a failure from ever happening again. It isn’t easy and Walta provides a nice action sequence where Magneto even takes a few licks. The result of the battle leads to one of the best panels in the book as Magneto’s presence oozes with terror looking down upon his defeated foe.
The terror is made bone-chillingly clear when Magneto compels cooperation with the tiniest of objects. Let your imagination run wild with the choices of torture you can envision! Bunn takes the story to another level mocking the weakness of the defeated doctor’s principles and the disgust Magneto feels towards such weakness.
Bunn doesn’t stop with a criticism of ideals and discomfort, but throws a wrench into the story, challenging Magneto’s own ideals and principles. His decision reinforces who Magneto is and the lengths he is willing to go to accomplish his goal. Bring it all down.