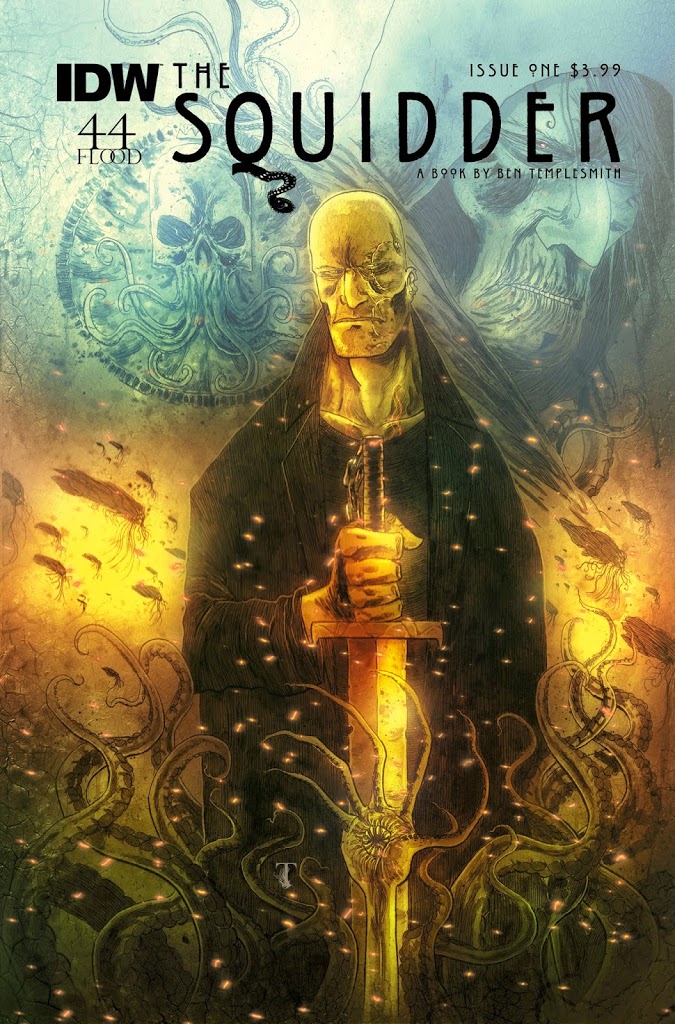 Ben Templesmith explores a dystopian world, where Earth has been conquered by an alien force known as the Squid. Surviving in this might-makes-right world is the last or one of the last Squidders, a genetically engineered man built specifically for the war.
The beginning of the book exemplifies Templesmith’s ability for world-building, showcasing a truly creepy ritual sacrifice of a young village girl to the Blessed Dark Father and the Blessed Squid Queen. The sacrifice is made in order to end a cycle, and does the cycle of life ever end for the village as the squids rain down fire and brimstone completely obliterating the village, leaving black smoke in their wake.
Templesmith doesn’t stop with exposing the reader to a harsh, unforgiving world but takes it a step further by introducing the Squidder, a man haunted by his past and his desire for death. Fortunately, he wants his death to be at the hands of a worthy opponent in combat, and there aren’t many if any worthy to satisfy his desire. The Squidder is not all brooding, but a bona fide badass who self-professes to have forsaken every principle he once had. Although this is questionable since he definitely vilifies those who associate and collaborate with the Squid.
There are other issues with this book including a spelling error when Templesmith is describing the Squidder’s regenerative abilities, as well as at one point it is extremely difficult to read the text as it blends in with the artwork. The Squid themselves resemble Reapers from Mass Effect and their symbol is all too similar to Hydra. There are also some odd plot issues as you get further into the book.
At one point, the Squidder is resting in a cabin when he is approached by a gang of ne’er-do-wells. Templesmith uses the encounter to show off the Squidder’s combat abilities as well as his intuitiveness and observation skills. Unfortunately, in what appears to be an attempt on his life is in reality an attempt to recruit him for a job.
At the other end of the spectrum, the artwork really does the story justice. The dark reds and oranges combined with the edgy penciling create an absolutely brutal world. Highlighting the brutality is a panel where the Squidder is fending off the hired thugs and he slams his oversized boot into the face of one—smashing it into bits, popping the eye out of the socket and crumpling his jaw. Meanwhile, he is blasting another with his pistol completely obliterating the attacker’s face. He even pulls off the Mountain finisher from Game of Thrones.
The Squidder introduces the reader to Mr. Hitchins, a Squidder, and his journey through a post-apocalyptic Earth as he deals with gang lords, the Squid, his dead wife, and his own desire for a worthy death.