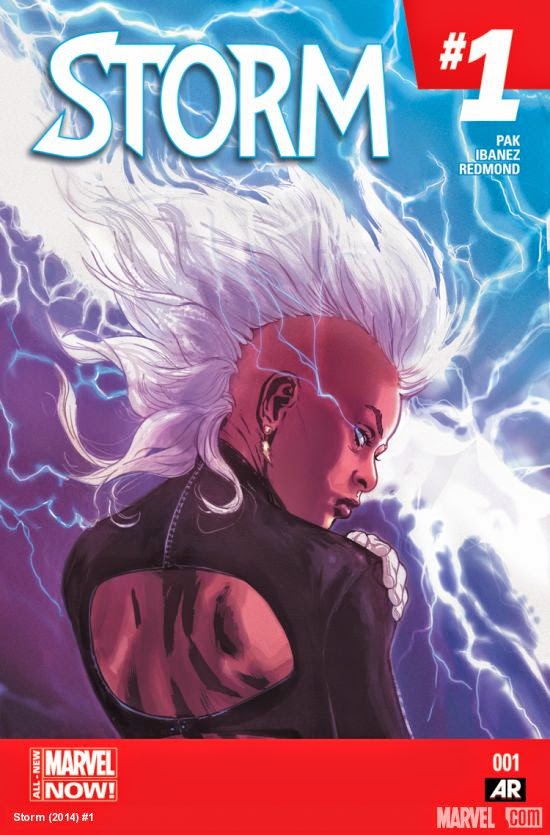 Storm #1 takes the reader on Storm’s journey to find out where she belongs. It is an interesting premise especially when Greg Pak unloads all of Storm’s identities and places she has called home on the second page! It is also surprising the story ends up being a journey of self-discovery. Since on the first page Storm declares she is older and a little wiser, which leads one to believe she has already found herself and is comfortable in her own skin.
Storm also doesn’t seem to be wiser at all; she is stubborn, impatient, and quick to anger. Despite being the Headmistress of the Jean Grey School for Higher Learning, she doesn’t feel a part of the school. Instead, she seems to be more independent, free from the school, doing her own thing, and even questioning her association with the school.
One of the strangest scenes in the book is when Storm is confronted by one of her pupils, Marisol Guerra, who is homesick and upset she is not able to be home. Marisol gets in Storm’s face calling her a sellout and accuses her of kidnapping her and stealing her from her home. The argument seems altogether ludicrous since everything this reviewer has read is all students voluntarily come to the school and no one is forcing them to stay. Storm is befuddled and does not address this issue at all, but attempts to address an accusation of mutant ideology indoctrination. The argument escalates and Storm reacts violently summoning a lightning storm within the school and stomps out of the room like a spoiled brat. Pak himself admits the insult shouldn’t bother Storm, but it does and she abandons her responsibility to Marisol and the school in a fit of a rage unbecoming of a Headmistress and a supposed wiser and older Storm.
The abandonment does lead to a foreseeable climax where Victor Ibanez gets to show off more of Storm’s impressive powers, tossing tanks through the air and sending soldiers flying with a gust of wind. Ibanez really excels in the emotional range he is able to convey through Storm’s facial features from remorse and happiness to anger and pride. However, not all of the artwork is as impressive. Beast looks more like a walking hunchbacked ape than an intelligent and strong mutant.
Returning to the story, Pak attempts to bring Storm’s journey of finding herself full circle, even making a jab at it by hinting Storm herself will “lose and find where she belongs a hundred times.” The story is a slap in the face of the reader telling us Storm is wiser and older, only to have her go and lose herself and act like a young, immature, hotheaded teenager.