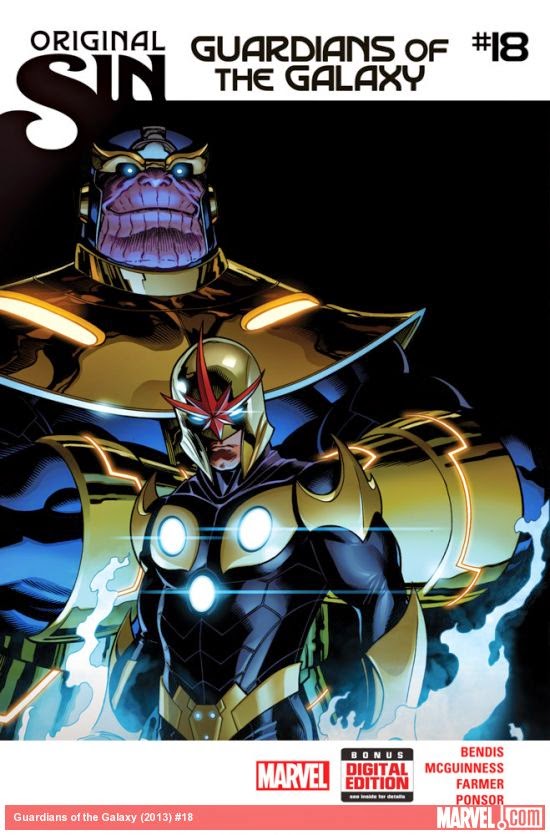 Brian Michael Bendis provides an excellent jumping-on point for new fans who have never picked up the comic, but who wholeheartedly enjoyed the movie! The plot of the book has little to do with the movie, but the feel of the movie is captured in the book.
Bendis puts the reader and Starlord on the edges of their seats from the beginning. Gamora has captured Peter Quill and is extensively interrogating him on how Thanos returned from the Cancerverse (“an imploding nightmare universe”), but Nova or Richard Rider did not. Gamora wants the truth and will not accept more of Quill’s lies.
The relationship between Gamora and Quill although being pushed to the limit in an extremely stressful situation is still enjoyable and evokes deep emotions. Quill makes a quip about Butch Cassidy and the Sundance Kid and Gamora has no clue what he is talking about. Quill explains how he and Nova believed they would be sacrificing their lives to take out Thanos and were content going out in a blaze of glory.
Bendis’ dialogue and narrative gets a major boost from Ed McGuinness’ pencils and Mark Farmer’s inks. The emotion and downcast nature of Quill really emphasizes his regret and sorrow for Nova. McGuinness draws Quill looking forlorn with his head cast downward and his eyes, his eyes just have the look of regret. Farmer is able to provide great shadowing, drawing the reader’s attention to the eyes and reinforcing Quill’s regretful emotional state.
The book transitions wonderfully from Gamora’s interrogation of Quill to the actual events in the Cancerverse. The panels are set up with the interrogation on the left side of the page and the actual events Quill is recalling on the right. Eventually Quill and Gamora are not shown and the reader understands Quill has begun divulging the truth. The Cancerverse is non-stop action. Nova and Quill equipped with some type of cube are pounding the crap out of Thanos and they even receive some unexpected help! Viewers of the movie will not recognize him at all; he looks more like the Hulk than the tattooed blade-wielding Destroyer movie-goers saw.
The artwork in the fight scenes is really good. Drax’s fist connecting with Thanos’ face is glorious to behold from Drax’s wicked grin to Thanos’ grimace as his face buckles and parts of his lips start to flap from the force of the punch. Not only do McGuinness and Farmer make a great team with the artwork, but Justin Ponsor nails the coloring from the red lightning in the background to the cube’s explosions of white light.
There were some minor hiccups when it came to the lettering. VC’s Cory Petit seems to have left out a couple words in a number of bubbles including the 4th panel when Gamora is discussing her spirituality, forgetting the word “the” before Sundance Kid, and one of the most glaring is the misspelling of Richard Rider altogether adding a y in place of the i!