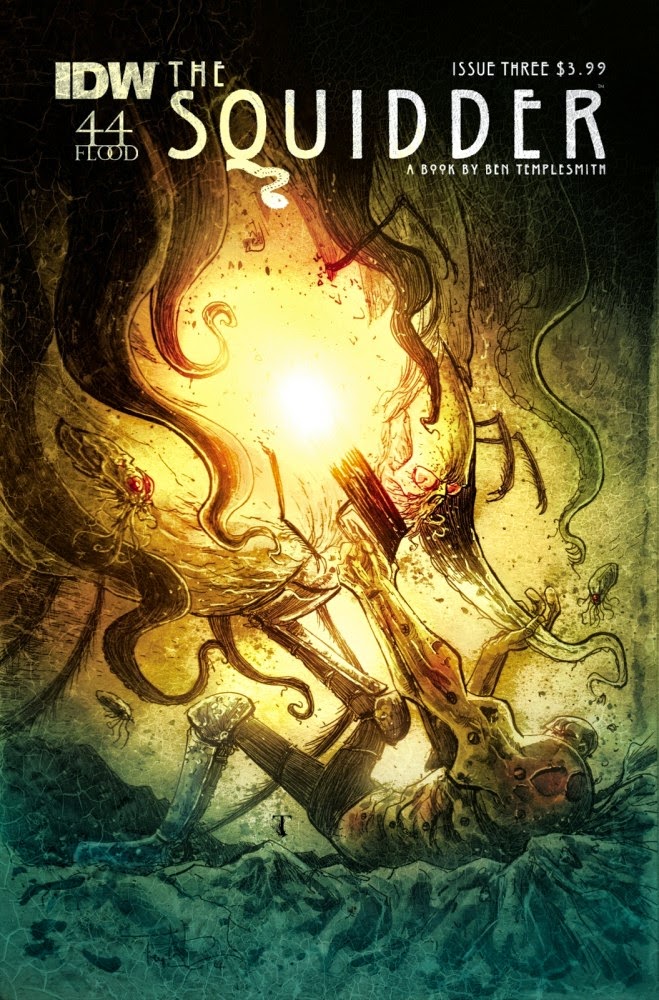 A gut-wrenching, tear-jerking look back into the Squidder’s past opens up Templesmith’s best book yet in The Squidder series. The scene evokes a twist on one of the most classic scenes in movies: Princess Leia telling Han Solo she loves him right before he is frozen in carbonite. Solo’s response: “I know.” However, Templesmith turns this idea on its head when the Squidder is forced to put a bullet through his wife’s head before she turns into a mindless Squid drone. Upon putting his wife out of her misery the Squidder realizes, “At the end, she never said she loved me.” The scene arguably has more emotional gravitas than Han and Leia and draws you into the character.
Templesmith does not stop with a twist on powerful movie themes. He gives us a glimpse into the politics of the Squid as well as explaining the Dark Father’s true purpose and the Squid’s overarching goals for humanity and the universe. The politics of the Squid look a whole lot like Agent Smith and the Matrix. Queen Unit 59B yearns to be free of the central sentience and believes the Squidder holds the key to this freedom.
The strangest and most bizarre twist Templesmith incorporates is the myth of King Arthur and his sword, Excalibur. There are tales the Lady of the Lake gave Excalibur to Arthur; however, Templesmith takes this to a whole new level. The Squidder receives a sword from a lady, notably Seph the Squid priestess, but only after completing a very sensual ritual and birthing process. The scene is shocking, creepy, and awesome all at the same time.
While Templesmith’s writing and story-telling take the forefront in this book, his artwork is still fantastic. He takes us from a gray drab landscape to snow-covered tundra to the mind of the Squid. The way he creates clouds as circular shaped smudges highlights the desolate, dying world the Squidder occupies. At some point, the smudges are no longer representing clouds but take the form of snow or are smaller and darker resembling ash. Templesmith really does an excellent job with his use of colors from using reds and oranges in a passionate love-making scene to greens and blues when depicting Queen Unit 59B.
However, some of the battle scenes are a little hard to follow with Templesmith’s pencil sketch art style. Is that the Squidder’s entrails flowing out of his stomach or is that his boot stomping on someone’s head? At one point Seph seems to take a massive blow from the Squid, with blood spraying from her left shoulder, but in the next panel the Squidder is complimenting her combat technique. Apparently, it was the Squid’s blood spraying across the panel and not hers.
Lastly, Templesmith’s lettering is excellent. The reader knows full well who is talking based on both the color of the text as well as the color of the speech bubbles. The Squidder and Seph have normal white/cream colored bubbles with black text, Queen Unit 59B has black bubbles with green text, and the Squid mother has red bubbles with black text.