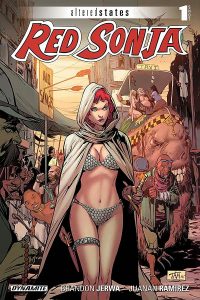 Red Sonja’s conscious is transferred to modern day New York, silently present in an unsuspecting museum curator until it is awakened to continue to wage war against the evil mage, Kulan Gath. Is it good?
Writer Brandon Jerwa builds up the legend and legacy of Red Sonja in just one page using a variety of differing rumors of her death to display her popularity in Hyboria. He is aided by Juanan Ramirez depicting her prowess in battle, devotion to the goddess, Scáthach, and virtue and persistence in fighting the forces of evil. However, there are some interesting depictions on the first page including a random skeleton wreathed in flames which appears in the second panel out of nowhere! Either that or Red Sonja’s sword has gained magical powers enabling it to instantly combust enemies on contact. There are a bunch of other issues with the art from Sonja’s hair covering her face as she hangs suspended in the air (Who knew she had gravity defying hair?) to a sword skewering a monster through the stomach while both of Sonja’s hands are above the creature’s back. (That sword must really have some magical properties!)
Continue reading at Adventures in Poor Taste!
Affiliate link: Click here to get your copy of Altered States: Red Sonja #1