The greatest mind the world has known, George Baker, has unveiled his latest invention, cyber-eyes. Cyber-eyes are retinal implants that allow an individual “to see beyond the visual spectrum, to zoom, and even record.” However, early adopters of the technology are falling victim to fatal occurrences. Could their deaths be connected to the cyber-eyes? 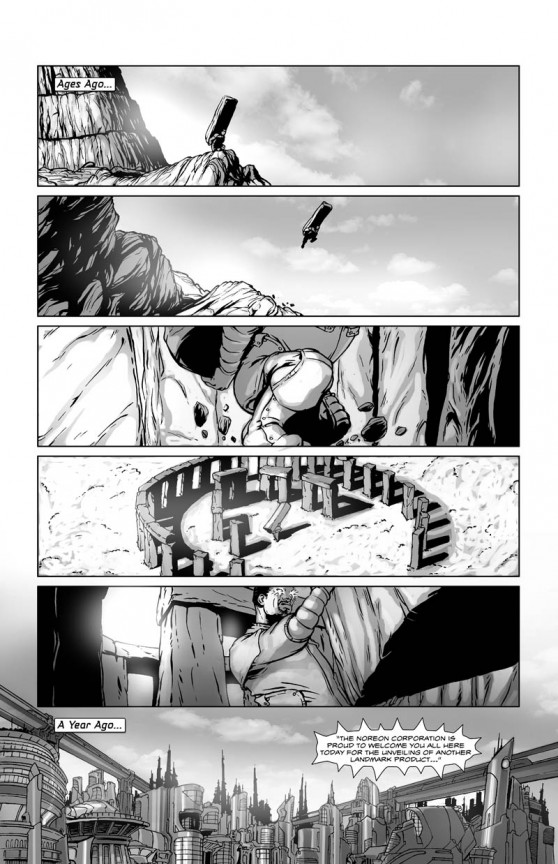 First Law of Mad Science #1 is full of mystery just waiting to be discovered or, in our case, read! The story throws mystery in our direction straight from the get-go. A man with glowing eyes is moving giant rocks from a mountaintop into what appears to be the shape of Stonehenge. This is the last we see of the man, but it definitely piques our interest and lets us know there is a whole lot more happening than we are led to believe.

The bulk of the story focuses on George Baker, his cyber-eyes, and the company that employs him, Noreon. The cyber-eyes are causing erratic behavior in individuals that ends up leading to their deaths. Baker, his son Hank, his robot daughter R.A.I.CH.E.L., and his boss Edward Varius work together to figure out the cause behind the deaths.

There is also a side story involving Baker’s wife, Emma, as she works on an ancient archaeological dig uncovering what appears to be creations built by the glowing-eyed man.

Writers Mike Isenberg and Oliver Mertz are a little wordy in their writing. For example, the first words you see are, “The Noreon Corporation is proud to welcome you all here today for the unveiling of another landmark product.” This can be drastically shortened and still capture the same effect. The wordiness continues throughout the book. It isn’t a major distraction, but it does slow the pace of the book down quite a bit. 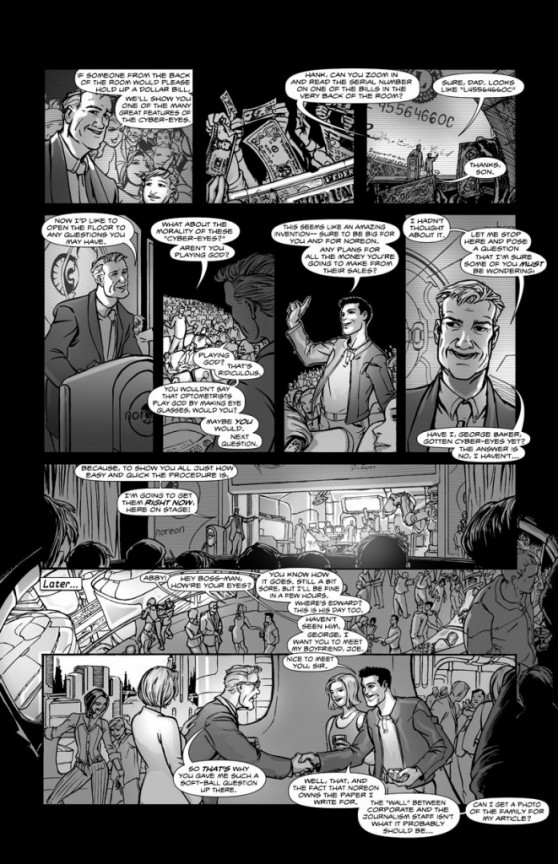 Isenberg and Mertz are able to effectively capture the Baker’s family dynamic. R.A.I.CH.E.L., despite being a robot, acts like an older sister. She taunts and jokes with young Hank, but at the same time she just wants to hang out with him too. She even offers to play video games with him. Meanwhile, Hank is focused on impressing his dad with his latest science experiment. There is good characterization and you are able to get to know who the characters are and can expect them to act in a certain way.

I also felt I was part of the investigation, especially when George and Varius go over point-by-point what they have discovered so far. In addition, they begin to bounce theories off each other, asking each other questions in order to get to a solution.

Daniel Lapham highlights the playfulness of George’s family and really gives them a feel of a typical nuclear family. He uses the proper body language and places them in typical scenarios such as sitting around the family table.

I really enjoyed the scenes where the cyber-eyes begin to apparently malfunction. You can see the fear in the soon-to-be victims’ eyes. He could have been a little more creative with Hank’s shirt. A plain shirt with “Science Geek” written on it is just too obvious. A little subtlety or even outrageousness to express the same concept would have been interesting.

First Law of Mad Science #1 is an intriguing foray into a world seemingly full of technical mystery, whether it be ancient structures being built by a man with blazing eyes or retinal implants known as cyber-eyes causing the death of its users. Isenberg and Mertz deliver well thought-out characters that have an excellent family dynamic. However, they bog down the pace of the book with an overuse of words. They can get their point across with fewer words. This would improve readability and the overall flow of the book. Daniel Lapham’s artwork expertly captured victims’ emotions as well as using generic nuclear family settings to emphasize the dynamic of the Baker household. First Law of Mad Science #1 sets up an intriguing world that begs to be explored!