Imagine walking through a park with your pur-I mean your leather satchel in your arms and you’re enjoying a lovely stroll. All of the sudden a few park muggers come out of nowhere to steal…well whatever it is you’d call that you’re carrying around. Gender policing isn’t cool anyhow.

But before your accessory can be taken from you a woman comes out of nowhere…with a bushy tail, floppy ears and a theme song that sounds eerily reminiscent of a certain arachnid-based superhero’s and saves you.

As it turns out, Doreen Green, AKA Squirrel Girl doesn’t pause for a second. As she sings her song she handily defeats the would-be thieves. She then walks happily through the park explaining how she’s leaving the Avengers Mansion and moving into Empire State University to work on a computer science major. Tippy-Toe, her best squirrel-friend questions why she doesn’t major in squirrel. But Doreen already knows all about squirrels so what sense would that make?

The bottom of most of the pages are greeted with “flavor text” that, if you can read them (they’re a bit too small is my only complaint) often add quite a bit of humor. Sometimes it’s just a funny quip about something going on or something that might happen. Other times it’s just informing the reader about a total non-sequitur.

Squirrel Girl is introduced as having “the proportional speed and strength of a squirrel” but given I’m not sure how strong actual squirrels are I’m only half-impressed. In any case, she has super strength and speed in practice!

In this issue we mostly get the lowdown on Doreen. She’s decided to play it safe and take on a secret identity. She doesn’t want to endanger anyone she loves while she lives in the dorms. To further that end she decides to tuck her tail into her pants. This way she’s just a girl “…who just happens to appear to have a conspicuously large and conspicuously awesome butt”.
Throughout the issue we see Doreen struggle with the task of maintaining her secret identity. She carries all of her boxes from the Avengers Mansion to her dorm. Upon seeing this, Thomas, a fellow freshman, stops her. Doreen freaks out and drops all of the boxes realizing it looks unusual for one supposedly normal woman to be carrying all of that.

Her roommate is Nancy Whitehead, an African American woman who’d appreciate if you followed at least these rules:

1. No making fun of her last name
2. Don’t criticize how she decorates
3. And don’t even think about talking smack about her cat, Mew

That last one is super important, okay? 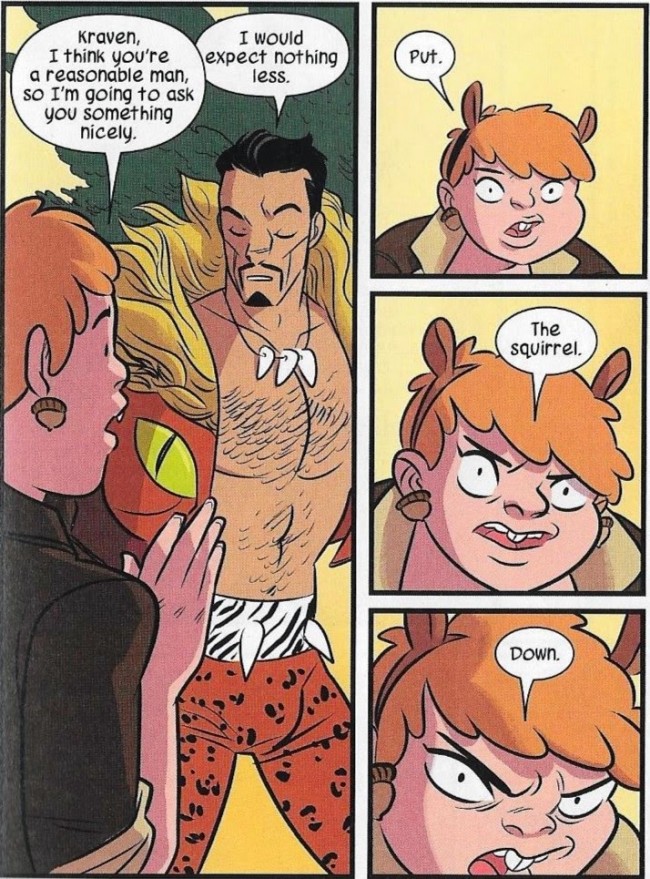 Anyways, Doreen manages to spot Kraven the Hunter traveling past her college looking for (who else?) Spider-Man so that he can kill him. What ensues is an entertaining and colorful fight with a resolution that is as hilarious and nonsensical as you’d expect but still oddly in character for both of them.

Speaking of color, the artwork is delightful to look at. It’s a mix of a cartoonish style with exaggerated emotions and facial expressions. Whatever objects are in the panel that need to be focused on are done very well, even things in the background stand out enough to warrant at least a glance or two. Overall Henderson does an amazing job bringing Doreen’s world to life and making these characters both new and old shine in interesting ways.

North’s writing is so spot on it often hurts. Your sides will be breaking apart by the time this issue is over. Whether it’s the peppered jokes throughout and the way that Doreen ends up resolving her fight with Kraven, there’s something for just about anyone to appreciate. It definitely makes seem Doreen more resourceful than just winning through squirrels.

This issue does all it needs to do. It establishes Doreen’s character very smoothly as a happy go-lucky but very serious crime fighter who takes her fight against injustice seriously. But she also knows how to have fun, talk to squirrels and keep her collection of Deadpool’s Guide to Super Villains cards handy.

What, I didn’t mention that already?

You really should read this issue.

And if you are looking to get introduced to Doreen, make sure to check out our Beginner’s Guide to Squirrel Girl!