Valiant Comics has just released a new trailer for their upcoming four issue series Book of Death. The book will feature a number of Valiant’s major players including X-O Manowar, Bloodshot, Ninjak, Unity, and the Harbinger Renegades. It will detail how they lived and how they died.

Creators Robert Venditti, Robert Gill, and Doug Braithwaite will bring the story to life as they explore the Book of the Geomancer. The book and its bearer, the last of the Geomancers, has recorded the events from the coming cataclysm to the dawn of the 41st century.

The Eternal Warrior must protect the last Geomancer from friend and foe alike in order to stop the impending Dark Age threatening to take over the Valiant Universe. 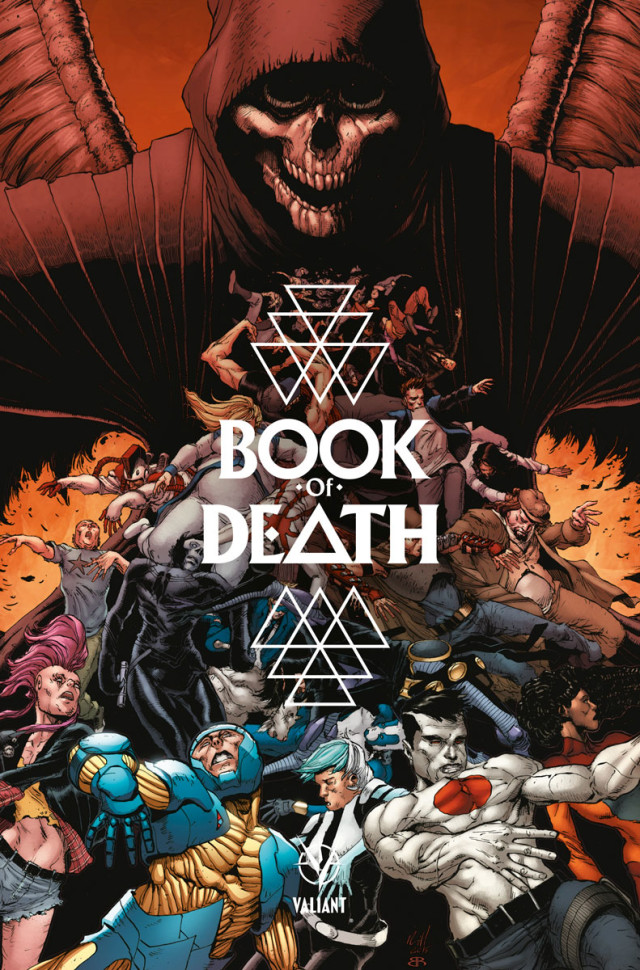 Book of Death aims to “reveal glimpses of the future of the Valiant Universe and, with it, many of the monumental events and occurrences that our heroes will face,” noted Valiant CEO and Chief Creative Officer Dinesh Shamdasani. He went on to reveal, “Major characters will die, while others will be introduced for the very first time. The loves, the losses, and the betrayals that await our biggest characters…it all starts here. … Book of Death will have an immediate impact on not only the stories that follow it in 2015, but on the next decade of the Valiant Universe as well.”

The series will also be accompanied by four one-shots examining The Fall of Bloodshot, The Fall of Ninjak, The Fall of Harbinger, and The Fall of X-O Manowar. There will be a ton of talent working on these issues including Jeff Lemire, Matt Kindt, Joshua Dysart, Kano, Clayton Henry, and Trevor Hairsine.

Valiant has put together some top talent for this summer series and if it is as good as [easyazon_link identifier=”1939346606″ locale=”US” tag=”bounintocomi-20″]The Valiant[/easyazon_link] was, this will be a series you won’t want to miss. I know I have added all of it to my pull list and can’t wait to sit down and start reading just two weeks from now. I hope we get to see the Immortal Enemy make a return!