In [easyazon_link identifier=”B00SVWCPCA” locale=”US” tag=”bounintocomi-20″]issue #2 of The Unbeatable Squirrel Girl[/easyazon_link], Doreen shows us what college is all about: ridiculous clubs, handsome hunks and going to the “gosh-darned moon”!

In the last issue it was revealed that Galactus is well on his way to Earth. Why is no one else detecting him though? Doreen is informed by Tippy-Toe (her squirrel buddy in case you forgot) that Galactus is coming through with some sort of stealth field…but he didn’t plan on making it work on squirrels. Totally valid, I mean who’d expect squirrels to be watching? But as Tippy points out squirrels are always watching.

During another set of scenes, Nancy and Doreen decide to go to orientation which includes a lot of clubs trying to get members. This opens the floor up (figuratively and literally) for a bunch of Easter eggs. Such as clubs like the “GET TOGETHER AND EAT COOKIES ONCE A WEEK CLUB” which has a sign that says “BRB”…presumably they’re getting some cookies.

Doreen eventually runs into Thomas again and has a totally normal conversation with him that doesn’t involve staring at him longingly. She also totally doesn’t talk about how she fought a “college administrator” who is “…going to live at the bottom of the sea and hunt sea monsters” who definitely isn’t Kraven by the way.

The bottom line is Doreen is crushing hard on Thomas and is a bit too distracted to pay attention to him talking about Fencing Club. Their relationship is pretty adorable and made all the more so because of just how awkward Doreen is in trying to hide how clearly not normal she is. 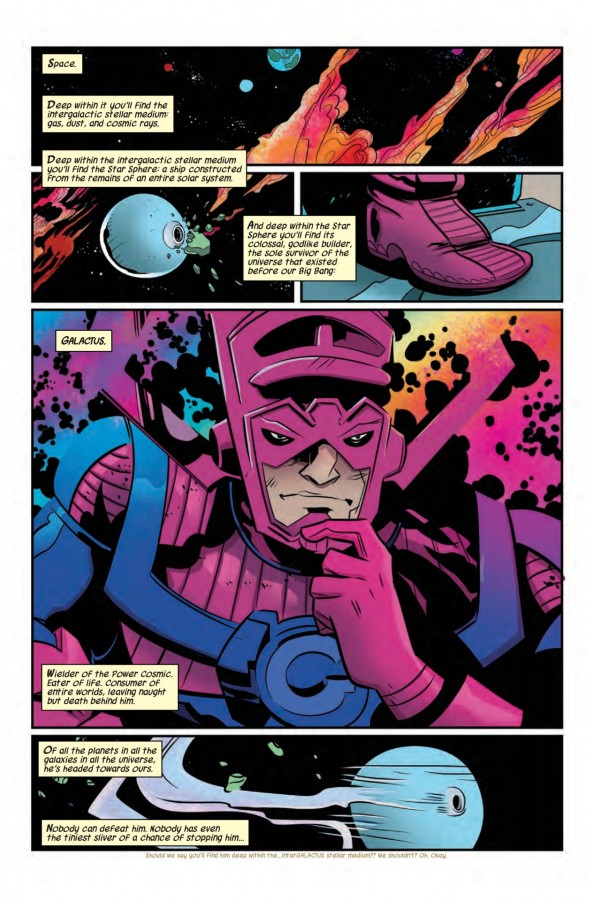 It’s interesting to see panels like this because to me it seems that when most superheroes try to hide their identity the struggle is largely of physical accidents that happen. Aunt May catches Peter changing into his costume or someone makes a connection between Bruce Wayne’s wealth and Batman’s gadgets.

But with Doreen her main trouble is verbal accidents. She seems to have a real problem lying to people (a problem which I definitely sympathize with) or at least not getting all flustered around hot guys. Another thing I sympathize with, actually.

The other part of this comic involves Doreen trying to break into Stark / Avenger Tower so she can get to the “gosh-darned moon”. This involves using her squirrel-like agility and abilities to get around the various traps Tony has set up to stop intruders. There’s also some text involved that you can read by looking at a mirror which I only recently discovered.

Oh, and Doreen has two hours until Galactus gets to Earth.

There is a fairly consistent level of humor throughout with the flavor text being varied, but still spot-on most of the time. The art is as expressive as it was before but also has a lot of interesting things to look at it in the background. It’ll make this issue, much like the last one, worth a re-read or maybe even two!

It’ll be interesting to see where Thomas and Doreen’s relationship goes, but anyone who even partially understands what is normal is bound to be a bit weirded out by Doreen at this point. Regardless, there seems to be some sort of (really really awkward) chemistry going on here. And hopefully it continues just as awkwardly and adorably.

There’s a small shout out towards the end of the first issue that Squirrel Girl was in with Iron Man back in the 90s which was a welcomed (and loving) jab at her original creation.

Overall, this is another incredible entry and the only problem that was going on with the slightly too small flavor text seems to be corrected as well! So I have no choice but to give this a perfect 10.