A new nemesis has arrived that has co-opted the Turtles’ allies and enemies. Will they have to team up with their long-time arch nemesis, Shredder, in order to defeat this new threat? Or will the Turtles manage to devise a way to take them both down?

Writer Landry Q. Walker immediately captures the personalities of the Turtles and in so doing adds humor to the story, especially with the discussion between Rafael and Michelangelo about Doctor Cluckingsworth. He uses Doctor Cluckingsworth as an on-going gag throughout the issue and it doesn’t get old or tired.

Not only does Walker quickly introduce the personalities of the Turtles, but he also displays their inexperience and overall lack of maturity throughout the issue. The first time this really comes through is with the appearance of their arch nemesis, Shredder. The Turtles spring into action. Disregarding his request for dialogue, they meet him with staff and sai.

After the battle sequence, the book bogs down a bit as Landry lays out a ton of exposition, detailing the threat they are about to face. However, the motive behind the villain is never revealed, only the fact that he is collecting certain mutants. In this sequence, it can be difficult to determine where your eyes should go as the lettering becomes a bit ambiguous and you find yourself having to reread to determine whether or not you are reading it in the correct order.

Fortunately, the exposition only lasts a few pages before the villain and his alluded-to army of captured mutants arrive to claim their last prize. The fight sequence is especially interesting given the disposition of Raphael and the fact the Turtles seem to be teaming up with Shredder to take down this new villain. The book has a certain [easyazon_link identifier=”B001E7JA6I” locale=”US” tag=”bounintocomi-20″]God Loves, Man Kills[/easyazon_link] vibe as the would-be villain will take on the role of mentor and antihero. 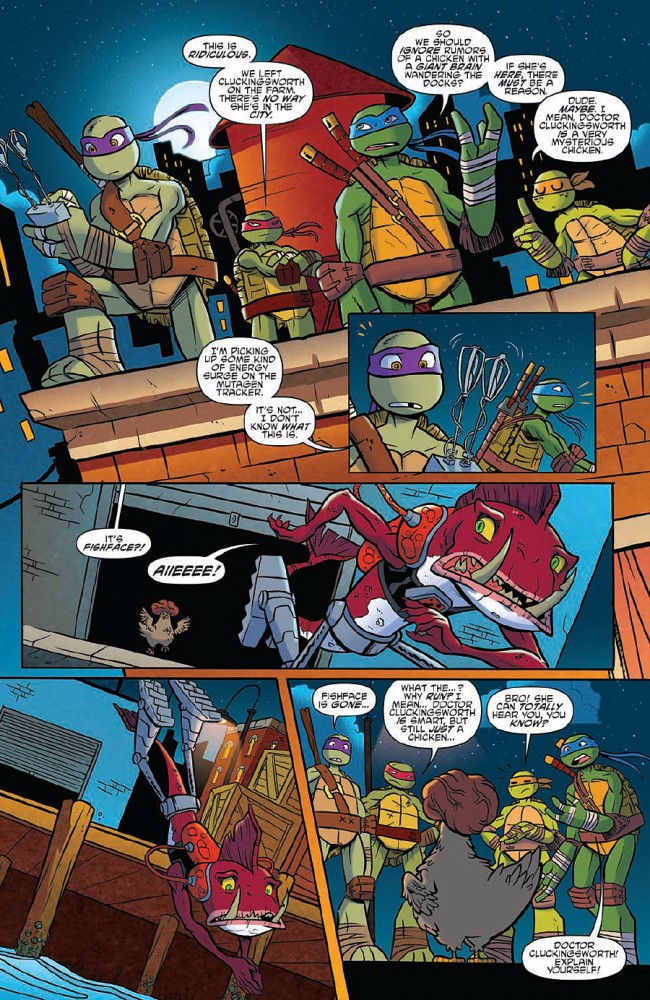 Chad Thomas’ artwork is definitely cartoony and is a reflection of the Nickelodeon show. Despite the cartoony nature, he really captures the facial emotions of the characters straight from the get-go. On the first page, he details Fishface fleeing from Doctor Cluckingsworth. The image is quite comical, mainly because you can see the fear in Fishface’s eyes. Thomas just slightly arches his eyebrows and places his pupils in the right spot to draw out the pure terrified expression on Fishface’s face.

The action sequences were exhilarating as he displayed a number of different positions the Turtles take, depending on their weapon of choice. One panel that really stood out was Leonardo defending Splinter with his swords drawn; you can see the reflection of Shredder’s eyes in the swords.

The background is really plain, but it suits the comic well, keeping your attention in the foreground on the action and characters.

If I was going to make one complaint, it is the gap-toothed grin he gives Donatello; it is quite annoying and appears a number of times.

Heather Breckel’s coloring is gorgeous. She uses reds and oranges to raise your emotions as the Turtles leap into action and transitions to subdued blues and greens as they strategize their next move. 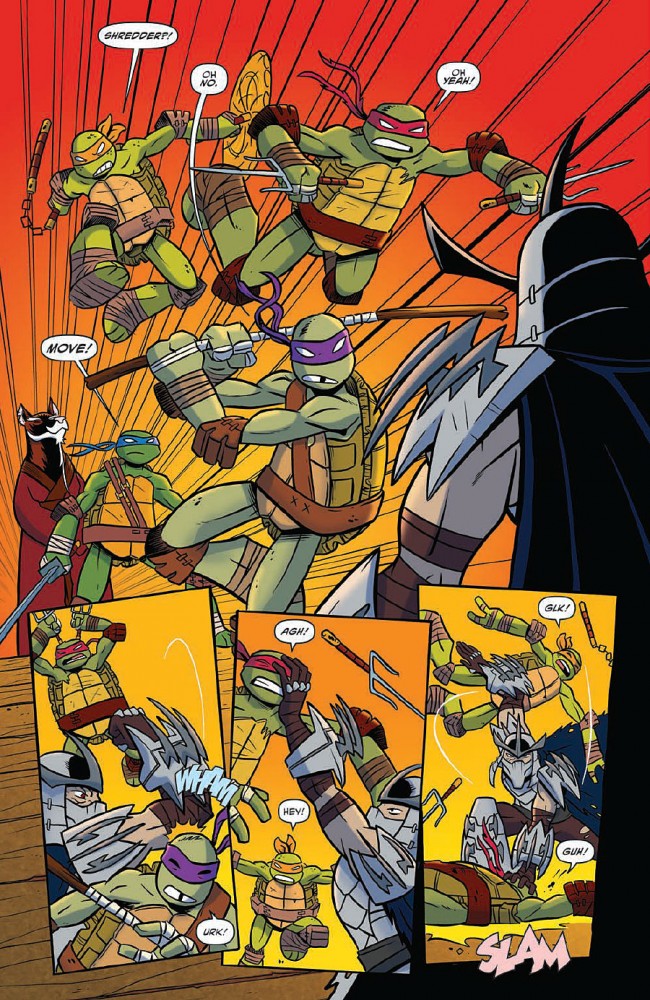 Following the main story, there is a bonus story from James Kochalka which is downright hilarious, telling the story of extinguishing a volcano that is threatening to destroy the city. The way the Turtles go about doing so is great from attempting to cook a pizza to attacking it with their weapons. It was a nice cherry on top.

[easyazon_link identifier=”B013H37FYK” locale=”US” tag=”bounintocomi-20″]Teenage Mutant Ninja Turtles Amazing Adventures #1[/easyazon_link] is an enjoyable ride that is filled with action and the colorful personalities of the Turtles. It might be a little difficult for brand new readers to the Turtles to jump in to due to the sheer number of characters that are mentioned and depicted. Despite this, the pacing of the story was good minus a slump in the middle and the artwork, though cartoony, was enjoyable except those gapped teeth.