Michel Benedetto looks to transform James Sallis’ [easyazon_link identifier=”0156030322″ locale=”US” tag=”bounintocomi-20″]Drive[/easyazon_link], a story about a stuntman by day and a get-away driver by night, into comic form. How does it fare?

First things first. Let’s talk about those covers. There are quite a few of them and for the most part they are all excellent, especially if you have a modicum of interest in classic cars. The main cover by Antonio Fuso and Emilio Lecce depicts a beautiful ’64 Galaxy cruising down the street. Mike Collins’ subscription variant portrays what appears to be a ’68 or ’69 Ford Torino just begging to have those rpms cranking. Finally, my favorite cover is Francesco Francavilla’s Book-A-Million variant cover which showcases a ’70 Torino peeling down the street. All three of these capture the essence of freedom you feel driving a classic muscle car down the street.

Let’s dive into the actual story. Much like Michael Moreci’s Roche Limit: Clandestiny, the story starts off in the future, revealing a chaotic scene that sets a dark, grisly, and mysterious tone. It’s a great hook as you wonder what lead to this horrific scene.

Following the opening hook, Benedetto does an in-depth character exploration of the protagonist, who isn’t mentioned by name. In the novel he goes by Driver. He is the best at what he does and demands perfection both in the movies and out of them. He also has a strict work policy when it comes to his night job. Unfortunately, despite describing this policy, he breaks it immediately, becoming more than just the get-away driver. 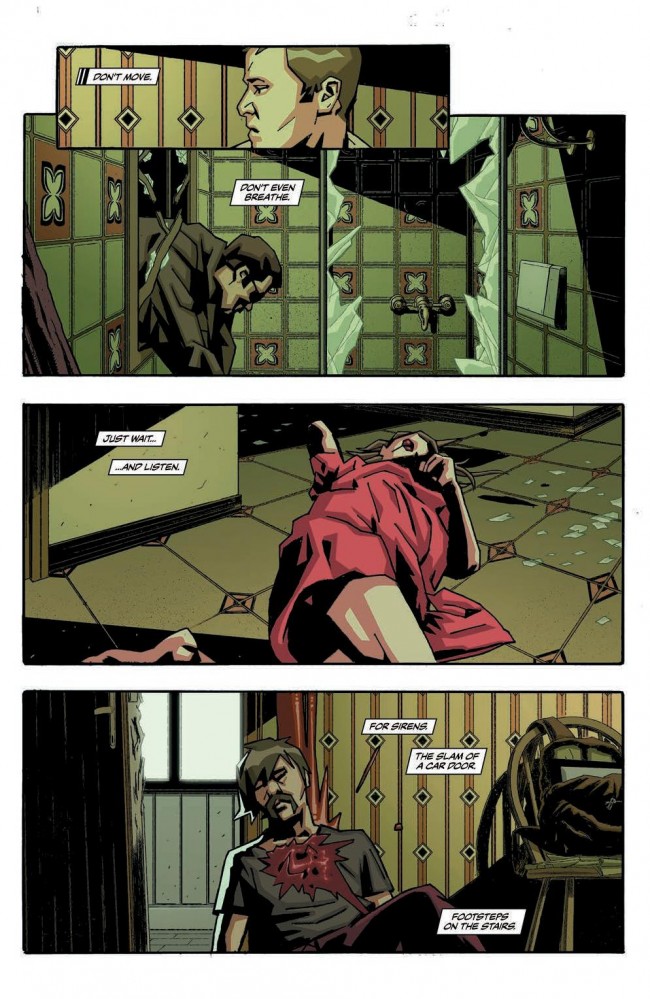 Benedetto uses an internal monologue to characterize Driver, but the best part is his ability to synchronize with Antonio Fuso’s artwork. Driver is a complete bad ass and doesn’t take shit from anyone. He is also very cautious about his night-time activities and his living accommodations accentuate this fact. In addition, he maintains a solitary lifestyle, although this may change with the introduction of his next door neighbor, Irina. Benedetto does a great job of detailing a story that describes Driver’s life, who he is, what he does, and how he does it.

Aside from the excellent characterization through his multiple experiences, Benedetto also paces the story, wonderfully transitioning from strong characterization to exciting action sequences to captivating mystery.

Antonio Fuso’s art style is not going to be for everyone and I’m not its biggest fan, especially when it comes to character detail. The opening scene details a horrific scene, but the third panel drops you out of the horror as a bullet wound in a guy’s chest looks more like a paint ball splat or a water balloon hit him. It doesn’t look like a gunshot wound at all. The depiction of Driver’s employer, Cook, is also frustrating to look at. His glasses are not aligned with his eyes and his neck and head are oddly placed on his shoulders. 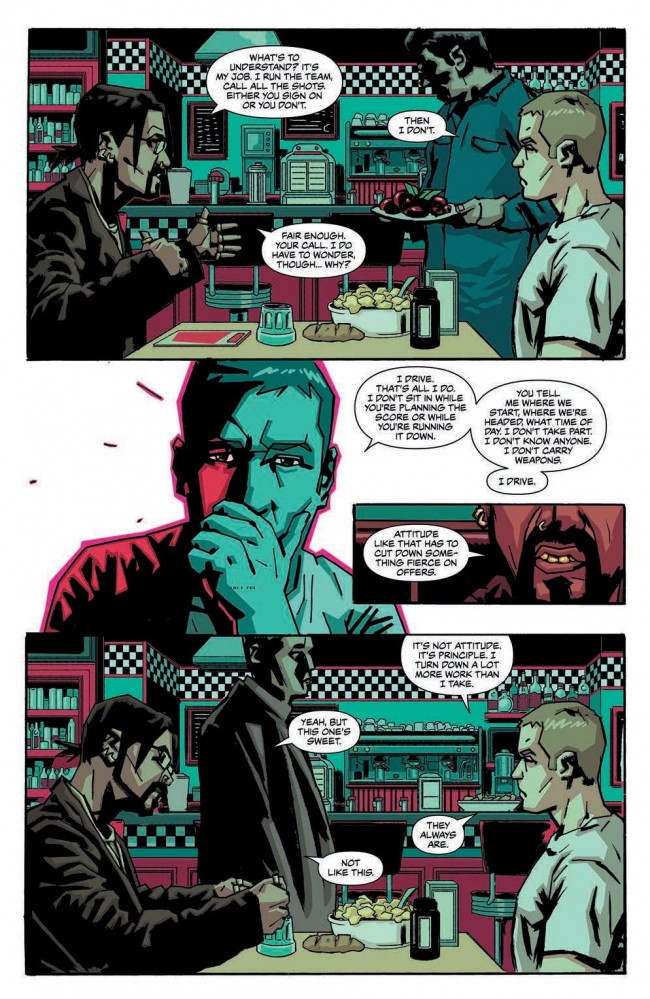 There were some really fun scenes when Driver confronts a bunch of hooligans attempting to muscle him out of his car. Fuso excellently details the action building up to the conflict, preparing you for the climax. Fuso excels at the chase scenes and the cars. They are exciting and you might even find yourself attempting to stomp on the brakes to slow down.

Frank Cvetkovic really aids in the chase scenes with his big, bold, exciting letters. You can hear the peel of the tires when he uses “Skreeevroom” or a huge collision with the obvious “CRASH!”

[easyazon_link identifier=”B013KXRQNC” locale=”US” tag=”bounintocomi-20″]Drive #1[/easyazon_link] will have me coming back for more. Driver’s character demands you learn more about him, whether it is the jobs he undertakes or the potential love interest with Irina. The artwork could be a little better, especially the character detail, but the overall story makes up for it. Fast cars, chase scenes, a murder mystery, and a compelling protagonist make for a fun story.