The philosophical sci-fi foray continues as Langford Skaargard returns (sort of) to discuss the failings of humanity and offer an opportunity to prevent the compromise of Earth’s entire psyche. Will Sasha, Elbus, Colt, and Danny be able save humanity? How does it fare?

Writer Michael Moreci uses Skaargard to connect the dots if you hadn’t already. He describes the dire situation Sasha, her team, and the whole of humanity find themselves. One of the most interesting developments is Skaargard’s emphasis on the past failures of the previous missions and their refusal to accept the “truth.” This is made more interesting because Sasha and Elbus seem to fall right into the same pattern as their forbearers. It reinforces Skaargard’s description of the failings of humanity.

However, the team defies Skaargard’s description of humanity being unable to cooperate. They effectively cooperate in some very exciting action sequences in an attempt to reach a fully-constructed spaceship and beat Stockton to it.

There are some issues with the continuity. Colt somehow avoids going through the forest to locate Sasha and Elbus. Instead, he seems to fight his way through the city to reach what had previously been a remote temple.

This is the only real slip-up. Moreci continues to develop his characters. The now-limited cast really allows Moreci to zero in on Elbus, Sasha, Danny, and Skaargard. Elbus’ blunt, to-the-point attitude really shines and Moreci effectively uses it to break up Skaargard’s exposition, detailing the trouble they and humanity are in. There are also some excellent emotional scenes with Skaargard and Danny. He captures Skaargard’s passion for the mission and Danny’s emotions toward Sasha. The scene is so poignant it brings up questions about what it means to be human. 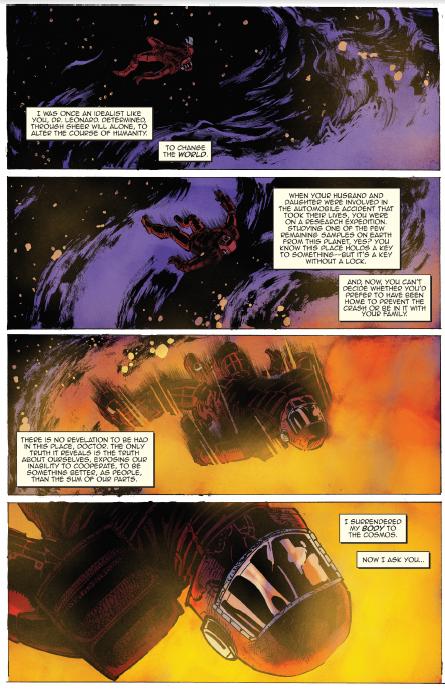 Kyle Charles really has some fun in this issue as Moreci unleashes him on a ton of action sequences. The different shapes and forms the shadow creatures take are really awesome to look at. He also encapsulates Moreci’s characterization of Danny. The images he creates during that scene are gut-wrenching.

Some of the scenes are a lot more playful despite the serious tone of the book. There is one sequence where Colt is tearing up the monsters single-handedly, counting off as if he is slaying Saruman’s Uruk-hai at Helm’s Deep. He would definitely give Legolas or Gimli a run for their money!

Matt Battaglia’s colors are mostly very dark as the shadow creatures seem to be gaining the upper hand through the episode. It highlights the desperation and the impending doom coming to destroy humanity. However, towards the end, the anomaly begins to break through and he uses much brighter purples, pinks, and yellows, offering the potential for hope. There is some room to improve on the smudging he uses to depict some of the clouds; there are some harsh lines that could be softened up to keep the focus on the characters rather than the background colors.

Roche Limit: Clandestiny #4 explores the possible failings of humanity, while ramping up the action as the team is no longer exploring, but is forced into desperation mode in order to survive. This brings out the best in the characters, showing their sacrifice, determination, and resolve. Kyle Charles’ artwork combines the serious with the gleeful in his action sequences, detailing a number of different combat sequences with Sasha, Danny, Colt, Elbus, and Langford fighting the shadow monsters. Battaglia does a great job lightening up the scenes, giving the team a sense of renewed hope towards the end of the issue despite the encroachment of The Black Sun. This is an exciting sci-fi romp with major discussions on the idea of humanity.