After drinking from Mimir’s Well of Knowledge and obtaining the eye of Odin, Thor makes his way to Asgard to discover its destruction. Will he be able to bury his family in peace or will the Dark Elf Regn and the fire giant Surtr claim the draugr’s life? How does it fare?

Writer and artist Walter Simonson continues the epic tale of the perpetual Twilight ruled by the Enemies. Simonson continues to not only build on Thor’s character, but the Dark Elf Regn as well, not to mention the introduction of a major villain and one of his henchmen.

Simonson’s character development of Regn reflects his own cunning in the writing, leaving the Dark Elf at just the most intense moment, allowing your imagination to run wild on what he could possibly be planning. None of my ideas were what actually occurred. This is one of Simonson’s outstanding skills; he is able to surprise you and keep you guessing. However, he is also able to weave character development into the surprise. He doesn’t allow Regn to take the easy and predictable path. Instead, he shows his dedication and love for his daughter and only other surviving family member. This love and dedication to family is also reflected in Thor’s own story in this issue.

However, unlike Regn, his love is not shown in providing for a living family. No, Thor’s love is shown through sorrow. Simonson details an extremely touching scene where Thor confronts the ruins of Asgard and his fallen family members.

Ragnarok #6 contains many emotional moments for Thor, Regn, and Regn’s daughter, Drifa. The most powerful of these moments comes through Simonson’s well-crafted main action sequence. Thor is fueled by the deaths of his family to seek out and destroy those who wreaked such death on Asgard. He begins with an epic battle against Surtr’s henchman, Halogi.

While Simonson might not have taken the easy path with Regn’s character, he does create an easy plot point to allow Regn to easily catch up to Thor. Although Thor has used a similar device, it just seemed a little too easy to transport the assassin directly into Asgard. 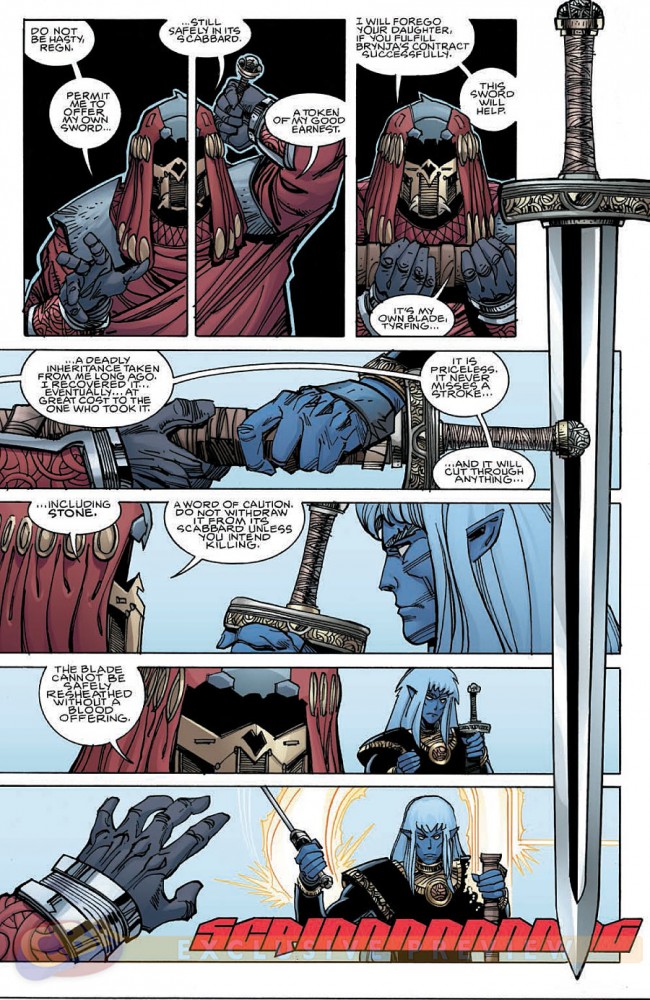 Simonson also focuses on recounting certain plot points from the previous five issues, detailing the bargain Regn and his wife made with Lord Angantyr in exchange for Drifa’s life. While I understand this decision since it is the beginning of a new arc and makes the story a little more palatable for new readers, it bogs the story down with too much exposition that consistent readers already know.

Simonson also excellently transitions the fight from one of strength and power into one of will. He does this by first depicting Halogi’s massive body crippling and tossing Thor about like a ragdoll. However, the art shifts focus when Thor begins to gain the upper hand using close-ups of Thor and Halogi’s faces.

Laura Martin’s colors further emphasize this contest of wills as she clearly uses the blue of Thor to contrast with the red of Halogi. This is then taken one step further as Thor’s blue begins to almost rise up out of Halogi’s head in the subsequent panel.

Outside of the fight sequences, Martin continues to capture the drab, decaying nature of the Dust Lands and how it has even affected Asgard. The colors may even depress you. 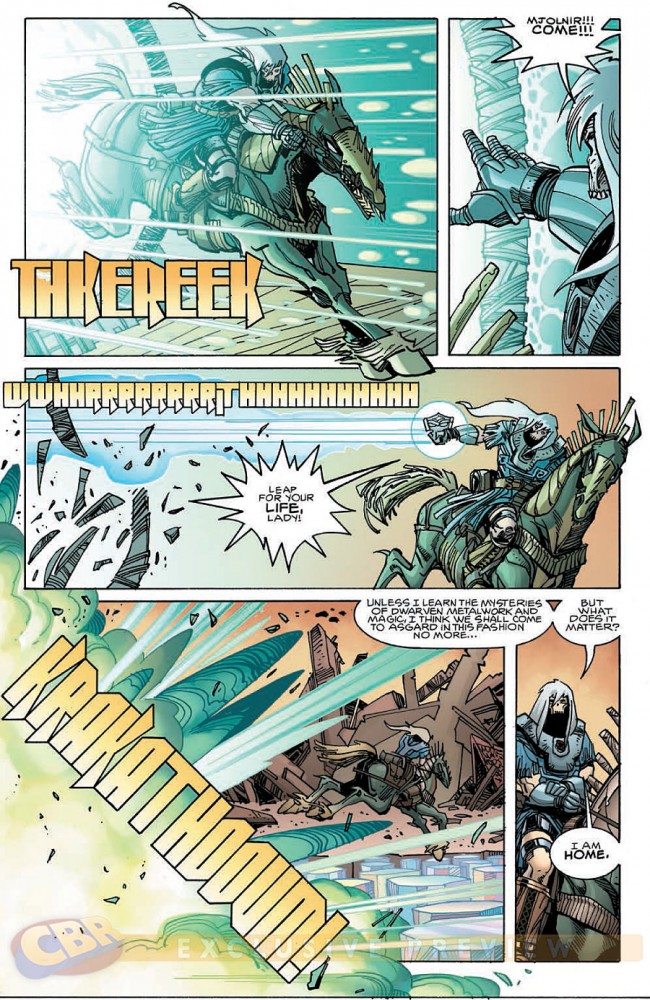 Ragnarok #6 digs deep into Thor and Regn’s characters, showing the emotional toll both men are going through but also highlighting their intense love for their family. There is also a fantastic fight sequence between Thor and the fire giant’s henchman, Halogi. However, the best part of the story is Simonson’s tease with Regn in his negotiation with Angantyr. There were some flaws with a little too much exposition and recapping of knowledge gained from previous issues.

Simonson’s artwork was great, capturing the characters’ emotions and also detailing an engaging fight sequence and transitioning it from a physical battle to one of willpower. Laura Martin’s colors emphasize and highlight this battle, but also depict the decaying waste of a world the characters find themselves in.