Because of Secret Wars the Marvel event, I presume. 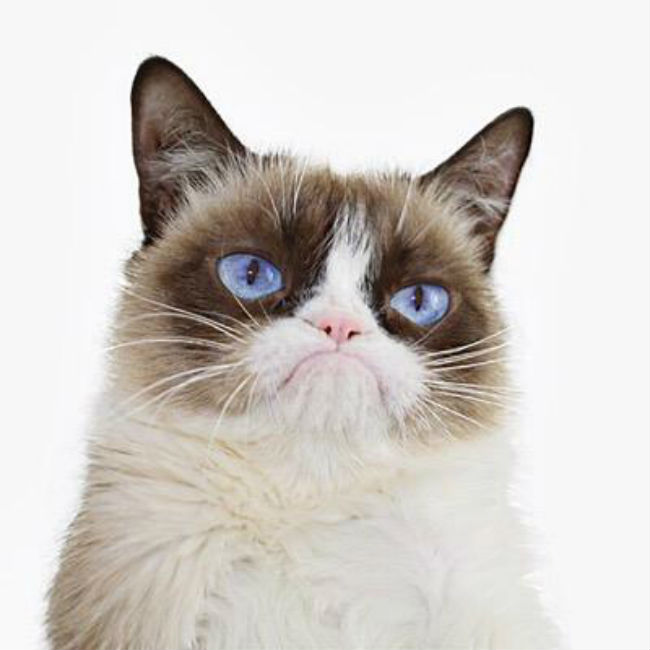 Excuse me while I grumble forever about stupid Marvel events; especially when they ruin comics that have almost nothing to do with them.

That said, this issue perfectly encapsulates what Squirrel Girl has been leading up to in these eight months. This issue has all of the heart, humor, good writing and great art we’ve come to expect from this series. North and Henderson don’t disappoint in this “final” jaunt through Squirrel Girl.

Just in case you need a quick refresher on what’s going on, Squirrel Girl, Koi Boi and Chipmunk Hunk are fighting the Norse squirrel god Ratatoskr on Earth and are struggling to keep up. Meanwhile, Nancy, Thor and Odinson (the previous Thor) are trying to learn more about Ratatoskr and what caused its appearance to begin with.

But it leads to more Asgardian cameos and that ought to delight any Marvel fan who was looking forward to more characters from Asgard making appearences. With the matter quickly resolved about who caused the havoc on Earth, Nancy and company head there to help Squirrel Girl and her companions take on Ratatoskr.

From there it becomes an intense battle between Ratatoskr and many different super heroes. Squirrel Girl revises her Totally Original Theme Song one more time and we get some insights into how Ratatoskr works. For instance, apparently the squirrel god plays on the insecurities of others in order to control them and get them to act at extreme levels of anger and violence. This leads to a stirring speech from Squirrel Girl who tells people to embrace their insecurities to some extent as a part of who they are. 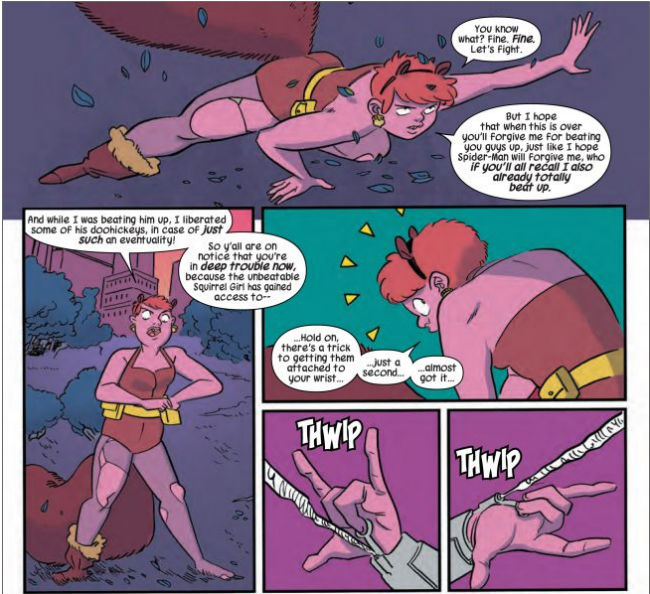 It’s really well written and emotionally powerful. As someone who struggles with self-esteem issues I can definitely sympathize with the idea that your own insecurities are some sort of gaping hole in who you are. It’s hard to reconcile the things you’ve done wrong in life with who you think you are. Or maybe it conflicts with who you want to be in some important sense. Regardless, trying to reconcile our little (or big) flaws with what makes us unique and important to the world is never an easy task.

It was fantastic to see Nancy constantly nerd out about Asgard and be completely unapologetic about it too. The flavor text, Squirrel Girl in a nutshell and little extras throughout the book (like Nancy’s Twitter handle being “sewwiththeflow” instead of “go with the flow” which reflects the comic’s love of puns and Nancy’s love of sewing) are on point as always.

One of my favorite flavor texts involve a character mentioning that the last time Ratatoskr landed on earth, “…all the raptors got replaced by hairless apes who invented fax machines…” to which the comic’s flavor text humorously says, “Is the Norse god Ratatoskr truly the reason the dinosaurs died off? This talking squirrel comic says: yes, absolutely.”

Also appropriately this comic is perfect.

The conventional mix of wit, humor good writing and great art is all there. Great character cameos and excellent flavor texting as well as little surprises here and there as well as extras and goodies are just sprinkles at this point.

The dialogue and scenery in Asgard, though not as explored as I’d like, are great and definitely get the job done. This is similar with the scenes that take place on Earth as well. Henderon has remained fairly solid in her drawings throughout and this issue shows no signs of that slowing down.

The end is gut-wrenching but in a very happy way and had me tempted to get a few tissues for myself.

There’s also an extra scene after the letters which was a lovely surprise and very funny. Fan mail from Doreen herself is always a treat! …Well maybe not for some evil squirrel gods I suppose.

There’s no way around saying this at this point. This series has been near perfect on almost all fronts. Ryan North’s uncanny ability to make us laugh, smile, appreciate friendship and the anxieties that come with those things are impeccable.

Henderson’s talents in terms of shaping a world that looks as cartoony as you’d expect but still feels plenty real is also amazing.

Combined they’ve created a series that has breathed life into a once dead character. A character that if you had brought up the idea of a solo series even a few years ago may have been scoff worthy.

But now it’s a reality.

It’s not only a reality but it’s a really well received one. I haven’t seen many people, reviews or anything else that have said something negative about [easyazon_link identifier=”B013ESMUFC” locale=”US” tag=”bounintocomi-20″]The Unbeatable Squirrel Girl[/easyazon_link]. Part of that is, I hope, people being fed up with how “realistic” and “dark” comics feel like they need to be these days. There’s still plenty of light, laughter and heart left in comics and things like The Unbeatable Squirrel Girl, Howard the Duck and Ms. Marvel are all great examples of this.

This is hands down my favorite series of the year and I can’t wait until it continues in October.

Until then friends, remember to Eat Nuts and Kick Butts!

I’d be remiss if I didn’t reprint this letter from Bob Britten and Thessaly, it’s the last letter in this issue:

I’ve been picking up UNBEATABLE SQUIRREL GIRL since the beginning, and it’s just terrific (although it takes twice as long to read because of the tiny type at the bottom of the pages). That said, why I’m writing is to thank you on behalf of my five-year-old daughter, Thessaly. She loves comics, and we always read SQUIRREL GIRL together so she can find out what’s happening with Tippy-Toe.

A while ago, we played through Lego Marvel Heroes together, and after beating the end boss, Galactus, she developed a persistent fear that he was coming to eat her. That same week, SQUIRREL GIRL #4 came out, and as soon as I got home, I handed it to her to read. No more Galactus fears—she even wrote him a note telling him she loved him! Thanks a lot guys (not only for helping out my girl, but for advancing a plausible theory of just why Galactus can never manage to devour Earth)—you’ve earned these two readers.

If that didn’t make you at least tear up then you have some issues.

No, not the comic kind.

Though that could be true too.