David and Scott Tipton adapt Nicholas Meyer’s The Seven-Per-Cent Solution, detailing Sherlock Holmes’ struggles with cocaine addiction and the falsification of “The Final Problem” and “The Adventure of the Empty House.” How does it fare?

David and Scott Tipton begin the story with a wizened, old Dr. Watson detailing a case he once believed should never see the light of day. The exposition is quite extensive as Watson describes Holmes’ character in his heyday and his nuances, such as violin playing and pistol shooting. However, a few of the pages seem out of order. Watson will detail Holmes’ character and then note his story requires an exploration of Holmes’ character. It doesn’t flow very well at all. It also takes quite a bit to get to the hook, that being the falsification of Sherlock Holmes’ greatest story against his archenemy Professor Moriarty.

It is interesting to note David and Scott go out of their way to make it clear to the reader this is an adaptation. They use Watson as he notes, “Lastly, my style may appear dissimilar…”

After this lengthy and at times confusing and awkward introduction, David and Scott delve into the actual story. The actual premise of the story is brilliant: Holmes has become the greatest detective and solved all of the most challenging cases and, in order to cope with the lack of work and challenge, he has resorted to using cocaine. 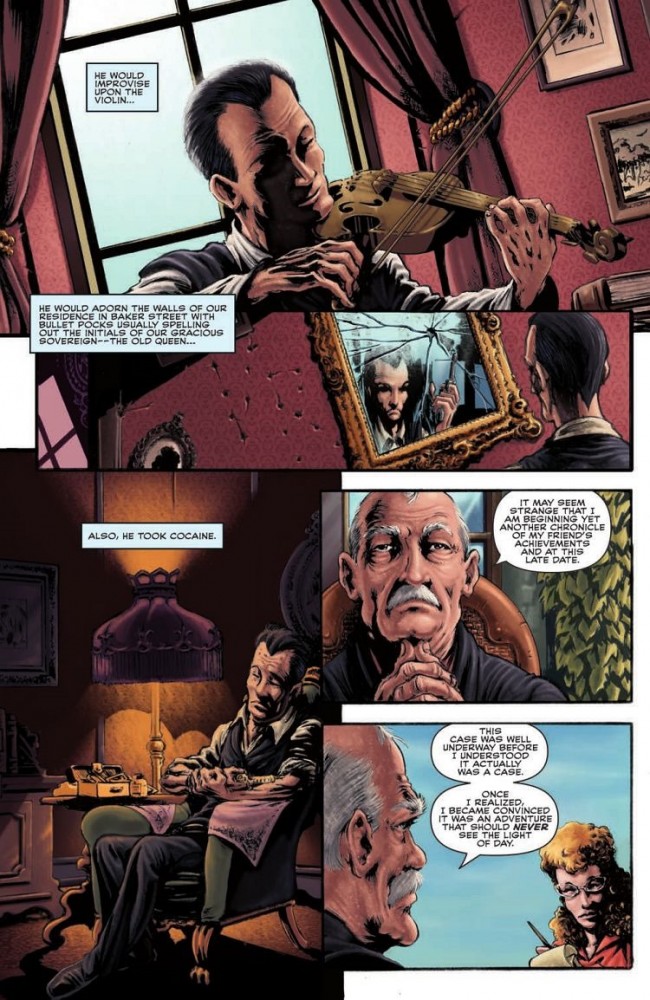 David and Scott do a decent job of laying out the plot where Watson discovers Holmes has gone off the deep end and decides to get him help. There is some great characterization of Professor Moriarty as they depict him as an innocent victim who is being harassed by Holmes almost every night and through letters. Even more interesting, is their past experience together which David and Scott refuse to reveal. This creates a big mystery the reader hopes to solve alongside Watson.

David and Scott use quite a bit of narrative to detail the story, too much in my opinion. They set this narrative up as if Watson is supposed to be detailing one of Sherlock’s adventures; yet, it is too much like a journal entry. Much of it also seems superfluous. Do they really need to write out that Watson is thinking about Holmes’ predicament?

Ron Joseph’s artwork is good. I was actually expecting the art to be a little more reminiscent of the time period. Instead, much of it appears as if it could be happening today. However, he does include horse and buggies and oil lamps. There were also some depictions of the characters’ reactions that did not seem to match up with what David and Scott wrote. He does do a good job of showing the characters’ emotions on their faces whether it is sadness, anger, despair, or resolve. 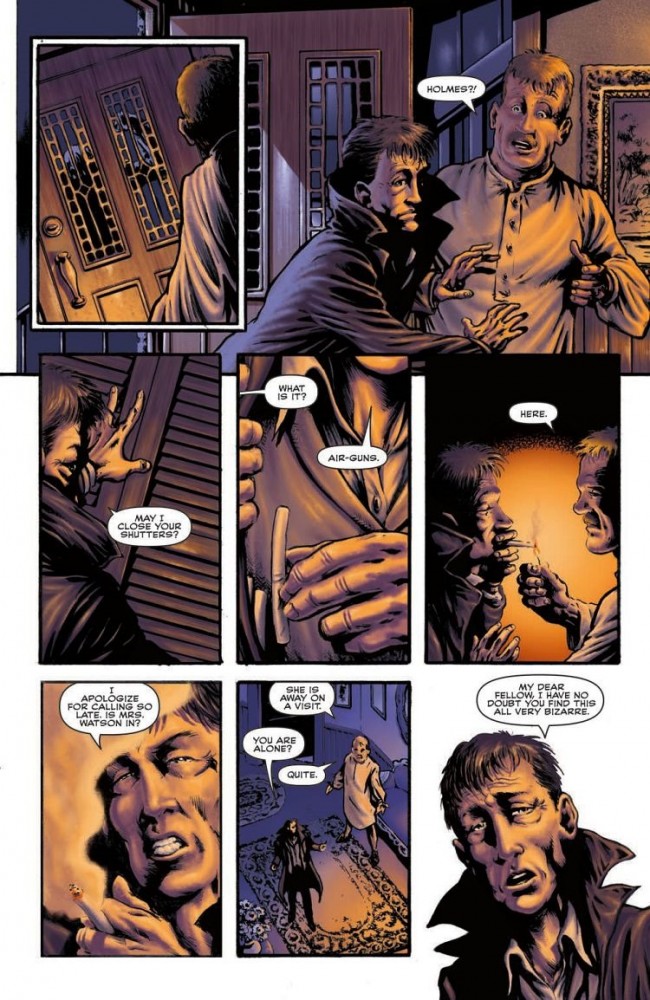 Jordi Escuin uses a very diverse color palette. The shades of grey she uses in the two flashback panels really stand out and capture your attention, telling you this is a flashback without having to actually have anything to tell you that it is. She also does an excellent job of using light to great effect, especially when Holmes is holed up in his house or drops by to visit Watson at night.

Probably the best feature in the book is the sense that there is a major twist somewhere down the road waiting to jump out and surprise you and the journey to get to that twist is worth taking.

Nicholas Meyer’s The Seven-Per-Cent Solution is definitely a character examination of Sherlock Holmes at his weakest, but it is more an examination of Watson’s deep friendship and concern for Holmes. Nonetheless, the issue really struggled in the beginning with what felt like out-of-place pages and a clunky writing style that includes many superfluous details. The artwork was good, but it had its setbacks where certain panels didn’t match up to the dialogue. That being said, there is a great concept here and a sense of mystery and intrigue that only Sherlock Holmes can solve.