Lando must find a way to save the mortally injured Lobot, while the twins, Aleksin and Pavol, duel to the death with Imperial Guards. However, the Imperial Guards are the least of their worries as the dangerous Bounty Hunter Chanath Cha begins his hunt for the Imperialis. How does it fare?

Charles Soule and Alex Maleev have so far given us the best Star Wars comic on the shelves. However, there was one thing we had been clamoring to see more of: Lando’s crew. In this episode, Lando’s crew takes center stage as Lando plays more of a supporting role and his gambler front is put to the test when his best friend finds himself on the brink of death.

Charles Soule perfectly paces this comic. He splits up Lando’s team as Lando and Sava Korin Pers abandon the twins in order to save Lobot. While Soule switches between these two groups, he also incorporates the even more looming threat of Chanath Cha. Soule is able to capture dramatic moments, intriguing combat sequences, comedic relief, and character depth, while also progressing the overall plot of the story. It really is just excellently scripted not to mention entertaining.

In the previous two issues, Soule has really focused on Lando’s carefree gambler attitude and his ability to use his charisma and charm to turn dire situations to his favor. Everything is out of his control in this episode; he has to rely on his team and their skills to turn the situation in his favor. To Lando’s credit, he does have faith in his team and relies on them, but the situation also exposes a quality we haven’t seen highlighted though we know is there from his actions in [easyazon_link identifier=”B00VF19CBQ” locale=”US” tag=”bounintocomi-20″]Empire Strikes Back[/easyazon_link] and [easyazon_link identifier=”B00VF0M7QE” locale=”US” tag=”bounintocomi-20″]Return of the Jedi[/easyazon_link]. Lando displays his friendship and loyalty in his attempts to save Lobot. 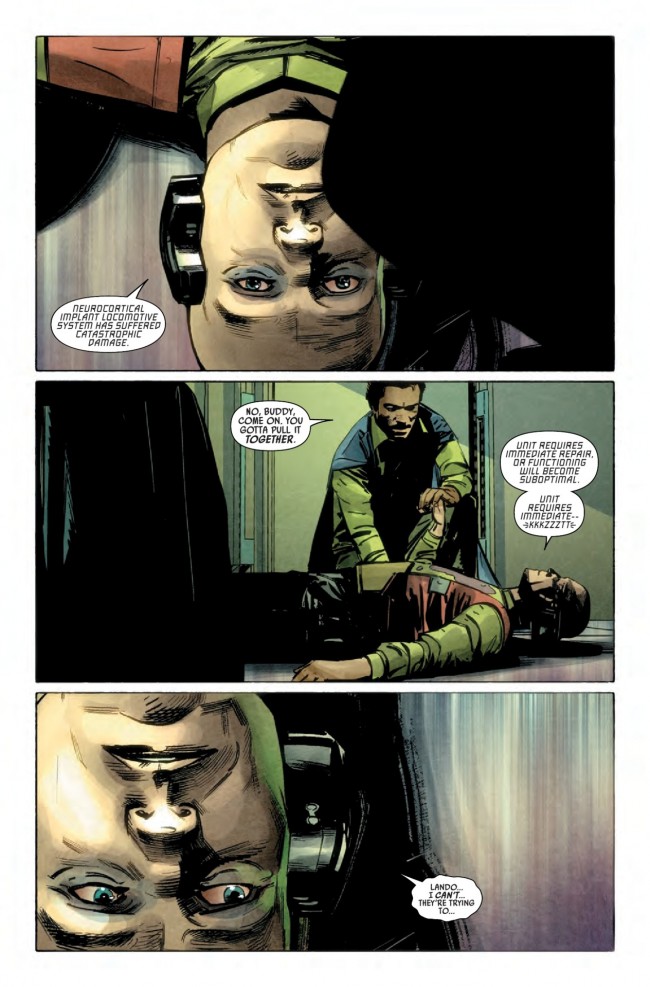 Outside of this show of loyalty, the best parts of this episode are with Chanath Cha and his new droid partner. As expected with Star Wars, the droid plays the comedic relief and it is downright hilarious. Soule’s dialogue perfectly complements Maleev’s artwork.

Maleev’s artwork is once again gorgeous to look at. The action sequences are well done with the panels not showing a second-by-second depiction, but highlighting key moments in the fight from an Imperial staff to the head or one of the twins blocking an incoming dagger. He also continues to expertly display his talent in depicting expressive facial features. He shows the concern on Lando’s face and the struggle Lobot is facing. There was one slip up where Maleev decided to exclude Sava Korin Pers as he and Lando return to aid the twins.

Paul Mounts uses a much darker color palette for this issue and it works perfectly since it is a much darker issue as Lando’s team faces its first real threat and setback. The colors used to depict the fight between the twins and the Imperial Guards evokes Luke’s fight against Vader in Cloud City. His use of reds, oranges, and pinks really intensifies the battle sequence and adds to the mystery of who is going to come out on top. 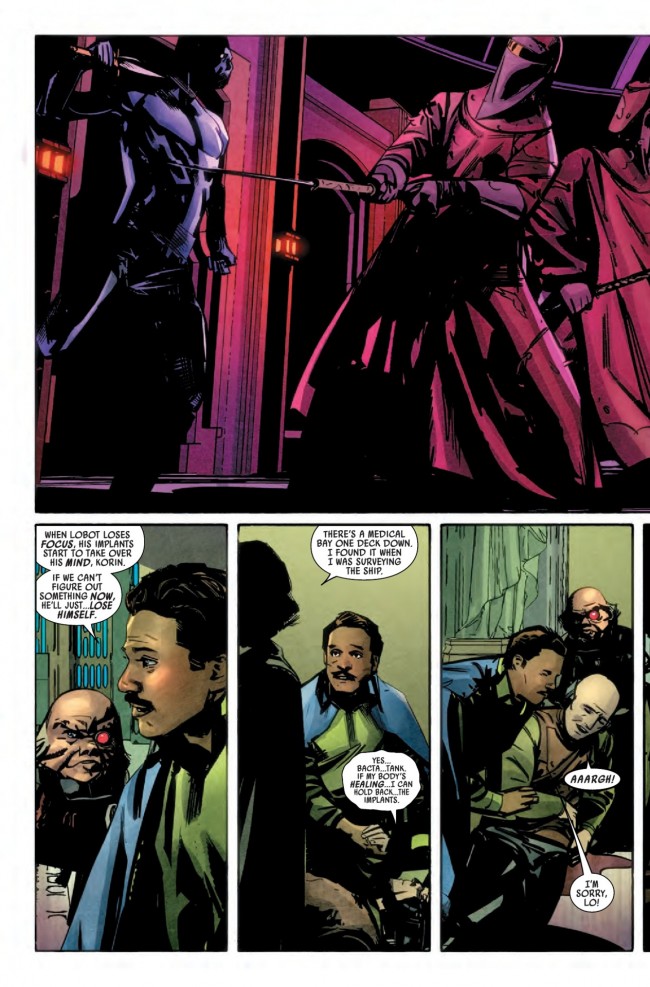 One thing is for sure if you thought Chanath Cha was the biggest of their worries, Soule has a surprise for you. He ends the issue with the perfect cliffhanger.

[easyazon_link identifier=”B0140MNGAY” locale=”US” tag=”bounintocomi-20″]Lando #3[/easyazon_link] is another near-perfect issue from Charles Soule and Alex Maleev. It is extremely entertaining and the best Star Wars comic on the shelves right now. It captures classic Star Wars from the droids to the bounty hunters to the team dynamic. It really embodies the essence of Star Wars. If you aren’t buying this book, you definitely need to. It is that good.