Young Abbey Chase travels around the world to avoid thugs and hired mercenaries who want to use her as leverage against her father. Twelve years have passed since she first began running and she has had a storied career, but her adventures are just now beginning. How does it fare?

Writer Andy Hartnell and artist Stephen Molnar break up Danger Girl: Renegade #1 into two sections. The first half of the story deals with Abbey as a young thirteen-year-old on the run with her protector, David, while the second half focuses on an adult Abbey who is a treasure hunter in the vein of Indiana Jones.

The first section jumps right into the action in the middle of a chase scene. Abbey attempts to avoid detection as three thugs track her down. It takes place in the back alleys of Cairo and has a great combination of tension build-up, action, and even a little bit of comedy. Imagine a young girl screaming at the horror of her own actions or a bunch of thugs attempting to chase a small, young girl through a pyramid of cobra-filled baskets.

Andy Hartnell includes a number of touching, carefree moments between young Abbey and her guardian, David. In just a few short pages you get a sense of their strong relationship, akin to a father-daughter vibe. He also is able to provide exposition in a very easy-to-consume part of the story by having David explain why they are on the run.

The story really moves at a rapid pace, taking you from adventure to action to character building to plot explanation to emotional scene in such a short time. It is almost effortless as well as running together so smoothly. 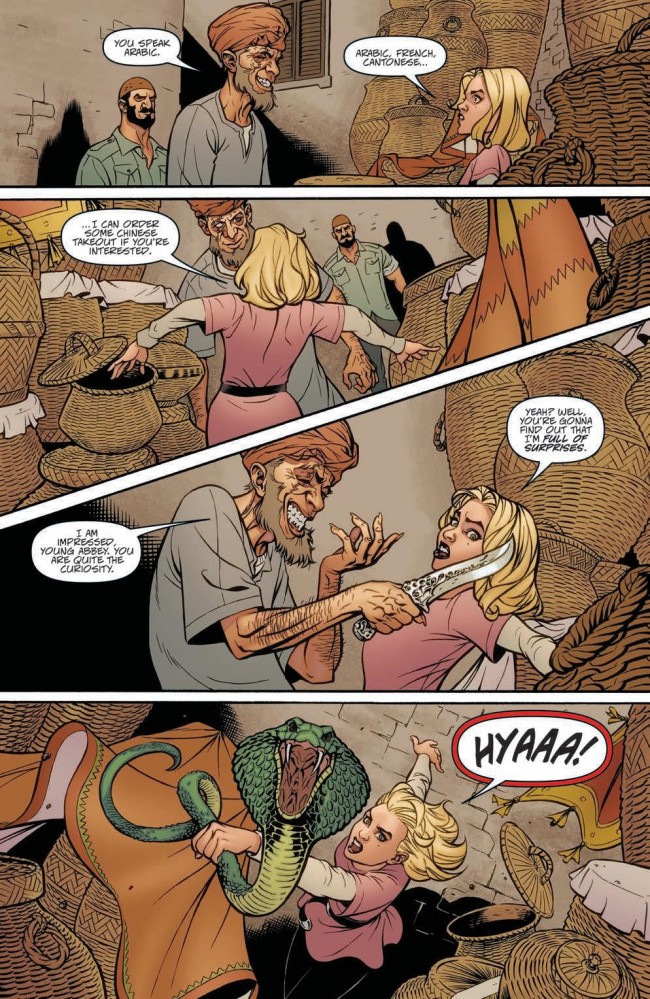 The second half of the story starts in much the same way with Abbey Chase on the run from some people trying to catch her. However, they are after what she has in her possession this time and not her. It has the action, the danger, and the tension; yet, the exposition doesn’t flow as easily. Primarily, because it is a little unbelievable that the crew she is working with wouldn’t know who she is.

Stephen Molnar’s artwork is really fun and he gets to spice it up with a number of different locations from the desert in Egypt, to the frigid tundra of Norway, to the tropical jungle of Ecuador. They are all unique and he gets to show off these various backgrounds as well as different clothing styles for the characters. There are some minor problems. There is one point where the thugs have seemingly captured Abbey in an inset panel, but in the full page she is at a stand-off with them.

The facial reactions Molnar uses are done well from surprise to contemplation and everything in between. The one where he depicts teenage Abbey crying is gut-wrenching.

John Rauch’s colors help bring to life the vibrant locations across the globe. He is able to focus your eye on specific parts of the artwork. For example, he is able to make an emerald sparkle. There is one slip-up where he darkens Abbey’s hair when they are in Norway, but that might be because they lack the sun that far north. 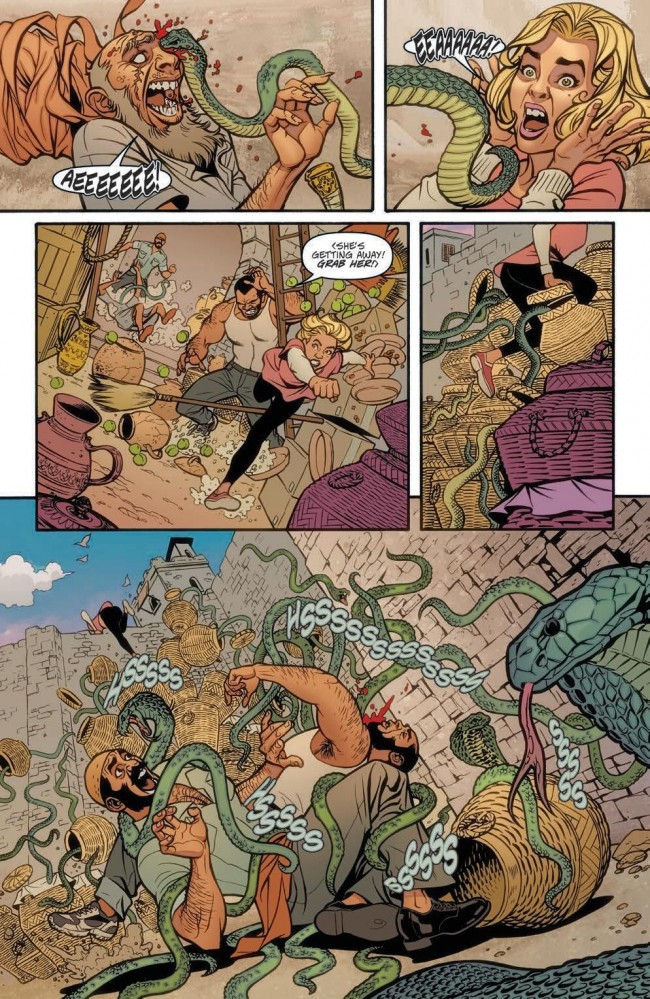 [easyazon_link identifier=”B013TFQ25Y” locale=”US” tag=”bounintocomi-20″]Danger Girl: Renegade #1[/easyazon_link] is a very fun, action-packed adventure with a compelling protagonist. The book has everything you could want from character development, a fun plot, good artwork, excellent action sequences, an interesting villain, and a rich and vibrant world. I definitely recommend Danger Girl: Renegade #1, especially if you love action-adventure in the vein of Indiana Jones. You can’t go wrong.