Miss Fury and Lady Rawhide are drawn together through an interdimensional revolving door to combat Voodoo Childe and an unnamed, winged demoness that appears to be Sakkara. How does it fare?

Writer Mikki Kendall begins the story with an interesting hook. A dinner party is broken up by what appears to be an attempted political assassination. Lady Rawhide leaps into action and quickly attempts to track down the would-be killer. The writing is rather intriguing, hinting at potential political motives, a good mystery, and potential detective work.

Unfortunately, none of this comes to pass. The story quickly devolves and becomes almost unreadable. There is the sudden appearance of a revolving door which appears to function as a cross-dimensional portal which puts Lady Rawhide into contact with Miss Fury. However, the writing and art make it very unclear whether this is actually the door’s purpose. Instead, we are given dialogue with Fury and Rawhide, both yelling and asking questions about the door.

Then, suddenly, Miss Fury is able to leap through the door. It is unclear how, because previously it was mentioned they were unable to pursue the suspected assassins. Somehow, the two women believe each other to be the perpetrator of their respective dimension’s attempted murders. 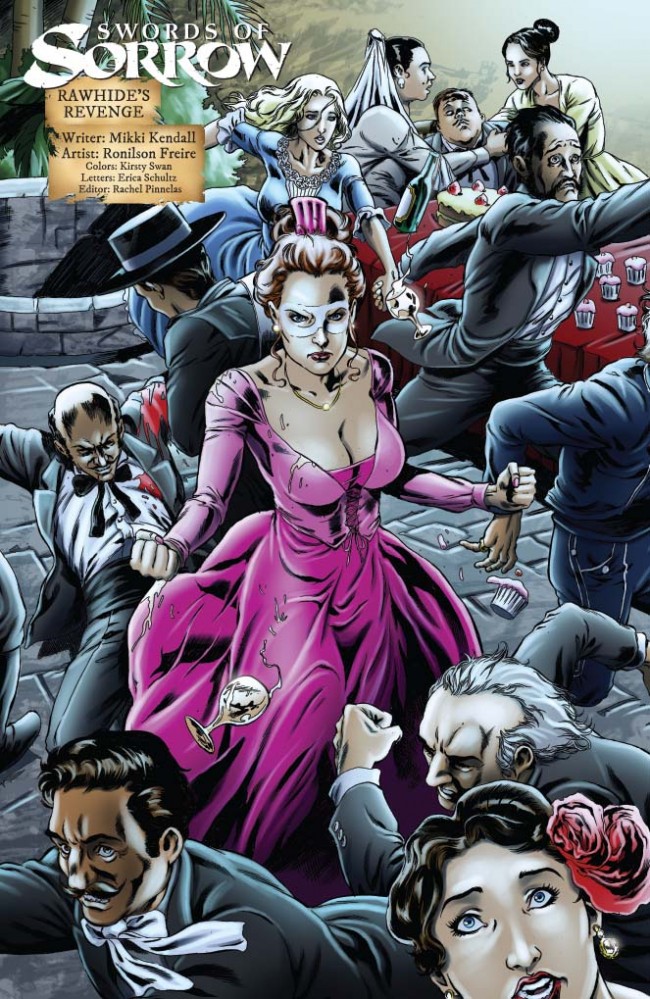 The plot in general is very confusing. It is unclear what Lady Rawhide and Miss Fury are supposed to be doing and what exactly is supposed to happen. The supporting characters and even Miss Fury are not introduced very well. I have no clue who The Prince is and what the name of the demoness is.

Not helping in the plot is Kendall’s dialogue and writing. At one point, Fury and Rawhide discuss telling a militia to not fire at them. However, the imagery clearly shows their rifles pointed towards the sky at the demoness. It is really hard to figure out what is happening throughout the entire story and, when you think you have got an idea of what is happening, Kendall throws another curve ball at you. It makes it really difficult to read and you find yourself flipping back and scratching your head as you attempt to make out what you just read.

Ronlinson Freire’s artwork doesn’t help clear up any of the confusion. In fact, the second sequence involving the revolving door jump starts the confusion. There are also points where certain characters’ facial expressions don’t match up to the script. The Prince, if that is his name, looks panicked when giving the two women the magical swords, whereas his scripted comments have a commanding tone. There are also quite a number of panels where the characters have bad proportions both with facial and body features.

Freire also uses generic New York City buildings with lightning flashes to depict the overlapping realities. It lacks imagination and is constantly showing up in the background. There are some good points when men in ponchos find themselves suddenly next to automobiles or World War II soldiers are confronting Mexican cavalrymen. 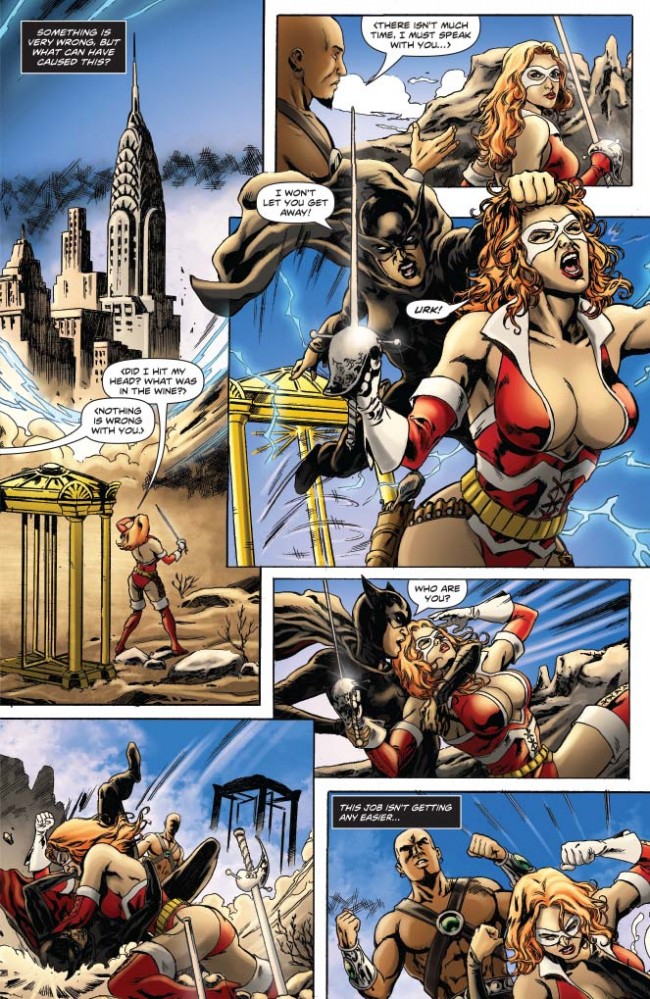 [easyazon_link identifier=”B013REO4PC” locale=”US” tag=”bounintocomi-20″]Swords of Sorrow: Miss Fury & Lady Rawhide[/easyazon_link] is not an enjoyable read. It is plagued with a confusing plot that changes seemingly after the first few pages and then constantly adds small nuances that don’t make sense. On top of the baffling plot is some poor writing that doesn’t match up with the artwork and helps to reinforce the confusing plot by not introducing characters or really explaining what is happening. The artwork has its own problems with generic city buildings and streaks of lightning to depict alternate realities.