[easyazon_link identifier=”1934985473″ locale=”US” tag=”bounintocomi-20″]Mother Russia[/easyazon_link] being the only work I’ve read from Jeff McComsey, I get the sense that the man has a unique way of looking at story telling. Rather than feed a reader details about the setting, backstory about the characters, and other such incidentals, he cuts right to the chase. It is an effective approach, drawing the reader into the world he creates, albeit at the expense of opportunities to flesh that world out.

Why is this woman training her sights on a zombie in war-torn Stalingrad? Why is she so concerned about protecting this child wandering the battlefield? How did undead come to roam these ruins?

The characters of Mother Russia seem clued into the answers to these questions, but they don’t feel the need to fill the reader in. And why would they? They have far more pressing matters to attend to than exposition. Sure, they drop hints here and there in normal conversation. But making sure the unseen observer to their life understands the intricacies of their situation is not a priority.

Because of this, Mother Russia is a very “in-the-moment” kind of story. McComsey’s minimalist art-style meshes well with his equally minimalist storytelling to create an immersive graphic novel. What it lacks in grand narrative it makes up for with genuineness and authenticity.

As a result, I feel a greater kinship with the two main characters, the tired yet diligent Soviet Sniper Svetla Gorshkov (aka “Mother Russia”), and the kind-hearted, if hardened, Nazi officer Otto Steiner. Their attention to the moment rather than narrative conventions makes them feel like people, rather than characters. My brief time with them in the 120 or so pages is much more meaningful for it. 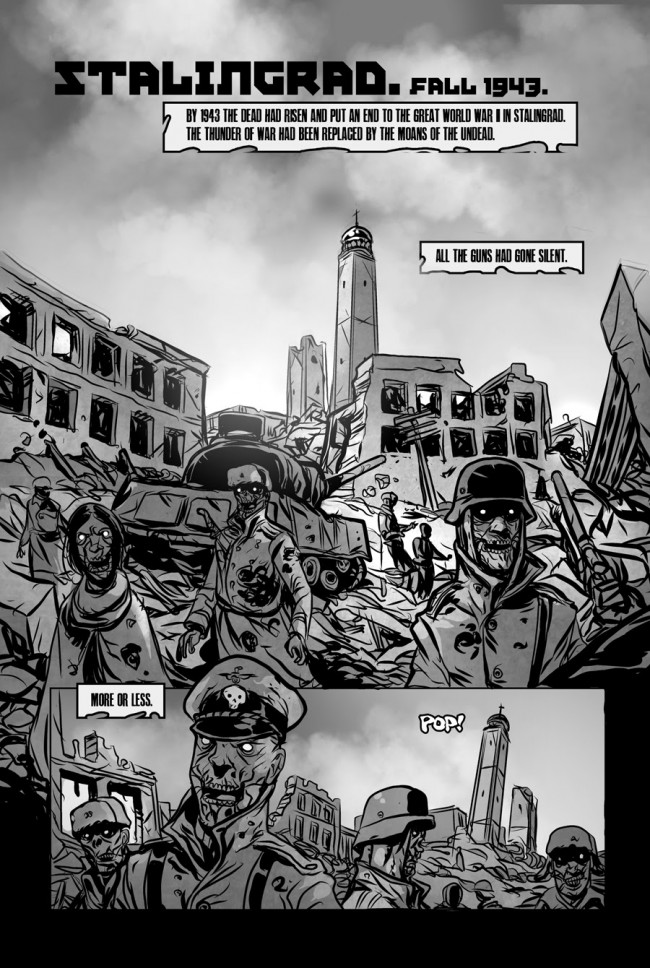 It’s a good thing, too, that the characters are so relatable. If they weren’t, the whole thing would be a dull affair. The plot is very thin, very predictable, and somewhat cliche. “Mother Russia” finds herself having to live up to the nickname her enemies have imposed on her, as she discovers a defenseless toddler wandering the undead-infested, frozen wastes.

What follows is nothing you haven’t seen before. She and her enemy must overcome their mistrust to care for this rare spark of life amongst so much death. But what makes it work is the genuinenature and simplicity of the presentation. The peripheral trappings of such a story are stripped away, and we are left with a powerful, if rudimentary, allegory for the human cost of war.

“Fascist, Communist… I think it no longer matters,” Steiner remarks at one point. “The war is over… we all lost. Serves us right, I suppose.” 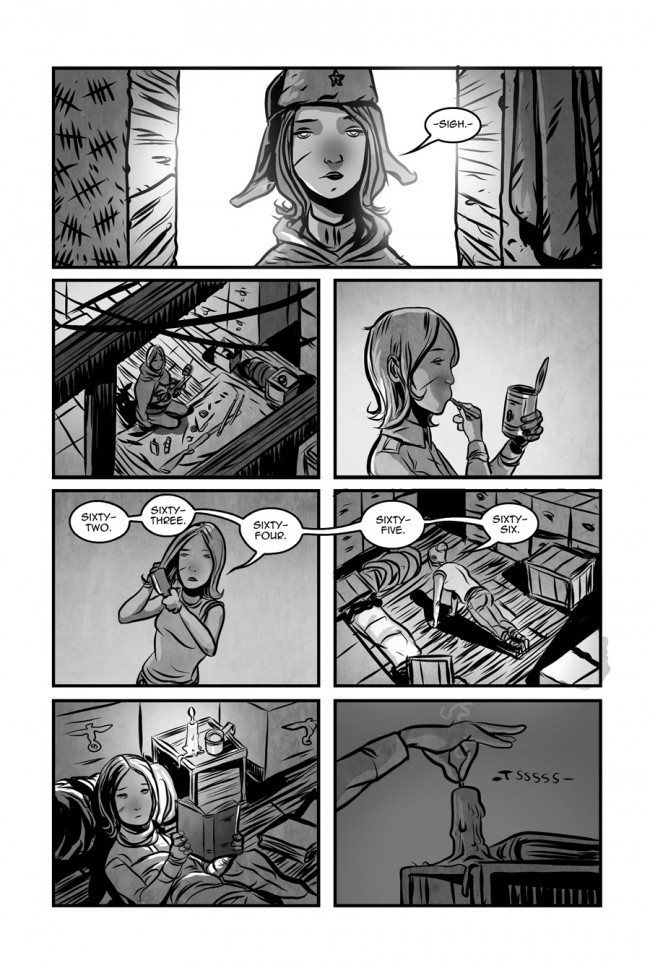 Following the three chapter story of Gorshkov and Steiner’s struggle are a few spin-off shorts. These have the same minimalist qualities as the main story, but they lack the same impact due to a broader focus. They’re good in their own right, but don’t really fit the tone set by earlier chapters.

[easyazon_link identifier=”1934985473″ locale=”US” tag=”bounintocomi-20″]Mother Russia[/easyazon_link] is a masterfully crafted, yet simplistic allegory for the true cost of war. Leveraging the tired tropes of a zombie infested war zone, McComsey manages to create an immersive and emotional experience through his narrowly-focused dialogue and minimalist sketches. Spinoffs from the main story are poor by comparison, but stand well on their own.