The story picks up in the middle of the Battle of Endor as Green Squadron provides cover for the Millennium Falcon as it makes its run on the Death Star. They even run into an Imperial shuttle fleeing the impending destruction! How does it fare?

The first page of [easyazon_link identifier=”B012C4UPCE” locale=”US” tag=”bounintocomi-20″]Star Wars: Shattered Empire #1[/easyazon_link] drops you into a number of memorable scenes from Return of the Jedi. The most prominent is Luke dueling Darth Vader as the Emperor watches. After reacquainting us with the Battle of Endor, writer Greg Rucka quickly transitions to introducing what I can only assume will be the main protagonist, Lieutenant Shara Bey.

Lieutenant Bey is an A-wing pilot who not only provides an escort for Lando in the Falcon, but she takes the attack to the Empire’s forces, going after an Imperial Super Star Destroyer. The battle outside the Death Star moves quickly and Lieutenant Bey finds herself escorting Luke Skywalker to the forest moon by the end of the battle.

Not everything is as fast-paced as the beginning of the book. Rucka slows it down afterwards and really personalizes the Lieutenant. She fears for the safety of her husband, Sergeant Dameron, who has been on mission with Han Solo on the forest floor. Luckily, he hasn’t come to harm and there is a very tender and passionate moment between the two, which Comicbook.com believes may be the inception of one of the more prominent characters for the upcoming Star Wars: The Force Awakens movie.

The moment is short-lived as duty calls. This allows Rucka to show Bey and Dameron’s commitment to the Rebel alliance. Dameron is a member of the Pathfinders whose motto is “First in, Last Out” and they are going to be the first to take down an Imperial hold out on the moon. Bey volunteers to pilot the mission, displaying her courage and resolve if that wasn’t already on display during her fight at the Death Star. 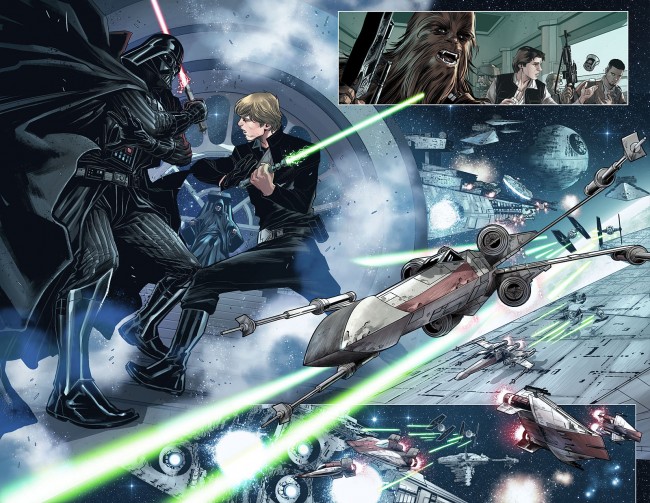 There are some errors in the writing during this scene. One specifically is when Han Solo asks for cover to deploy his forces and then in the next panel is saying, “Take us in hot.” It makes absolutely no sense and, even if Rucka is going for some kind of fly by your seat of your pants humor using Han, it doesn’t really work. This isn’t the only time where the dialogue is confusing. During the dog fighting outside the Death Star, much of the chatter between the pilots can be hard to understand due to the code signs and nicknames of the pilots. You aren’t sure if they are calling out one of their fellow pilots or the direction of the enemy fighters.

The highlight of this issue is the artwork. Marco Checchetto’s art is absolutely stunning from the first page. The lightsaber battle between Vader and Luke demands your attention, but due to the nature of the full page spread he incorporates the other parts of the battle as well giving us as readers the full scope of what is occurring. It roots us in the timeline.

His panel layouts flow nicely and capture the chaotic nature of the space battle and how quickly things can turn from bad to worse or bad to good. In addition, he is also able to slow down the pace and capture extremely intimate scenes.

The best pieces are the sweeping battle scenes. Whether it is in space or on the forest floor, they are breathtaking and really depict the grand scale of the conflict between the Rebel Alliance and the Empire. 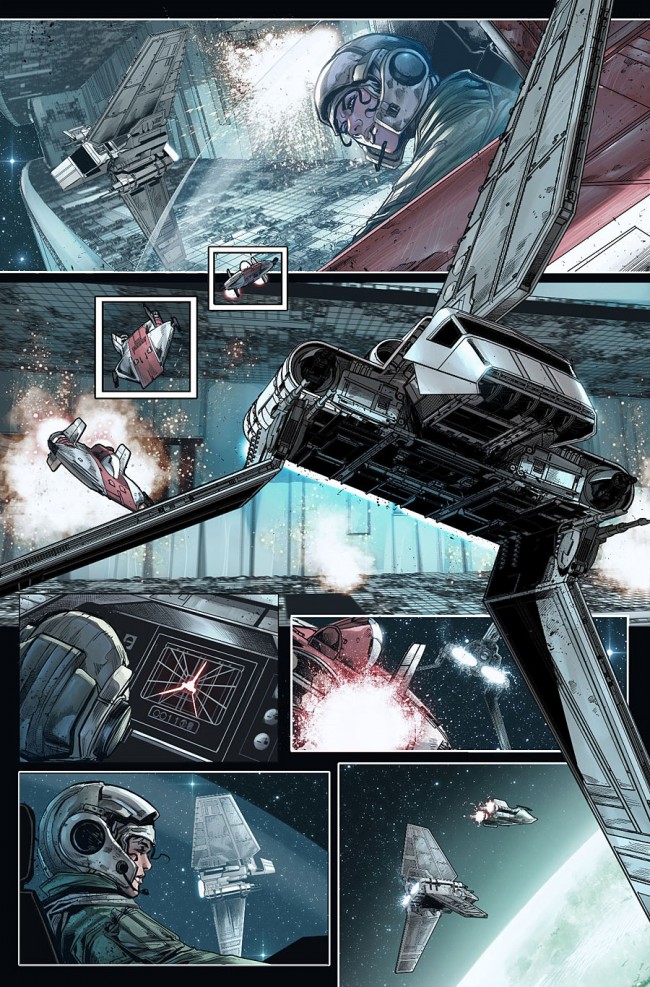 [easyazon_link identifier=”B012C4UPCE” locale=”US” tag=”bounintocomi-20″]Star Wars: Shattered Empire #1[/easyazon_link] puts you right into the action during the Battle of Endor and introduces two new interesting characters. The writing for the most part is well done, although there can be some confusing parts during the space battle and there is one major blunder towards the end. The artwork is absolutely phenomenal; the sweeping scenes of the conflict are gorgeous to look at and Checchetto is able to easily bring those sweeping scenes home in smaller, more intimate settings as well. There was a little disappointment that this took place during Endor instead of afterwards. However, if you look past that, this is a fun, exciting, and memorable adventure that gives a new perspective to the Battle of Endor.