Angelino is a young loser like thousands of others in the Dark Meat City. He and his friend Vinz are squatters at a seedy hotel room in the Latin Quarter, Rios Rosas. Angelino spends his days watching Mexican wrestling matches on TV, delivering pizzas and having bizarre metaphysical discussions with his roommate. A stupid scooter accident will plunge Angelino into a hurricane of unimaginable trouble, as he becomes the only person on Earth capable of recognizing the vicious cosmic entities that walk among us, who are readying themselves to invade the planet. (emphasis added)

First off, being a loser is pretty awesome. I just finished a book, Apathy and Other Small Victories, by Paul Neilan and being a loser isn’t always such a bad thing if you’re interesting and entertaining as well.

Second, being a squatter is pretty interesting, definitely not your typical living situation.

Third, delivering pizzas while in practice isn’t probably too cool might make for a good story.

Fourth and lastly, some bizarre metaphysics are always a plus!
But back to the main story, it’s clear that RUN (the author artist, etc. behind Mutafukaz) put a lot of his time, heart and energy into it. But how does it fare?

The art is very reminiscent of old-school stick figure games that I used to play when I was in middle school. Which makes sense given that Mutafukaz was written in 2006 which was around that same time. Given that, I felt a bit of nostalgia looking at the characters every now and then, of a simpler time I guess.

But the plot is anything but simple.

Even encapsulated as it is in the above description, the landscape of the comic is far too rich to be captured. The setting is a dystopian California, “New California” that has been torn apart by the San Andreas Fault back in the late 60s. A town called Dark Meat City also appeared alongside the Mexico border and is the more direct setting of the story.

The Mexican influences of this story are all too apparent. From the symbolism littered throughout the story, to the language some of the characters use and the emphasis (or is it de-emphasis) on Christian like symbolism. Specifically through bumper stickers with Mary on them and more humorous references through a wrestler named “Jesse Christ”. Christ is the reigning champion of the wrestling league that our protagonists love watching.

Those protagonists, by the way, are as mentioned before Angelino and Vinz. Angelino is more or less a stick figure with a very polished black dome and bulging white eyes. His friend Vince is a bit more creative and has…well a flaming skull for a head. 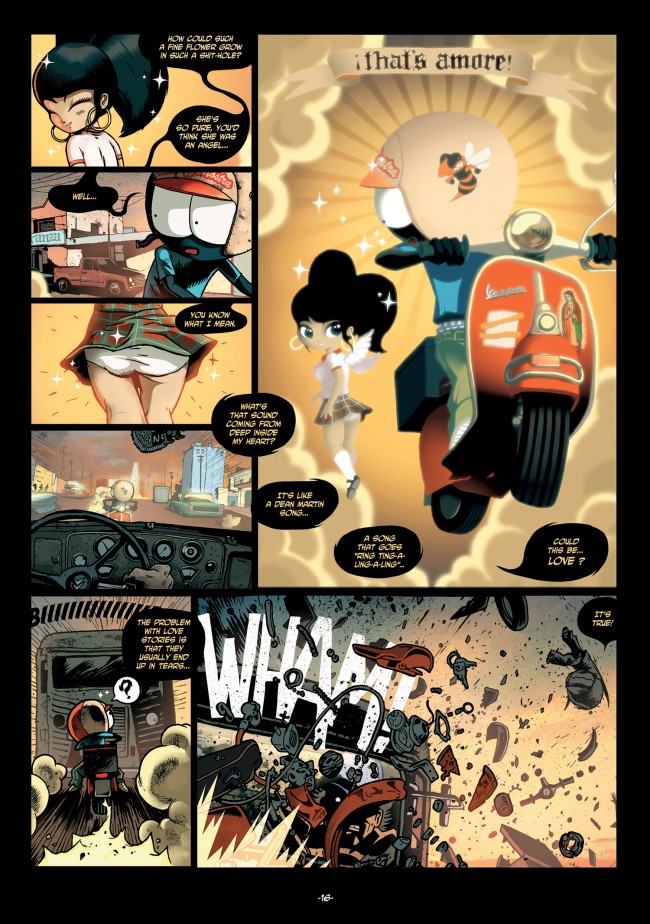 The story at least partially revolves around Angelino and Vinz being losers. Angelino gets fired from his job in the first few pages, Vinz is unemployed, they’re already two months behind on their rent and so much more is yet to come that’ll go wrong!

I really enjoy these types of stories, probably because of my own background of growing up poor. Of course, that depends on how you see “poor”. I had a TV and I was always able to be fed but nor was I very wealthy. My mother was always working a bunch of jobs to keep me in school and fed. Add to that that we had to move around a lot throughout my childhood. And it’s not like I’ve climbed much of the economic ladder since then so I can still sympathize.

So I really feel for the main protagonists or ones that are “losers’ in some way. It’s probably one of the reasons I really enjoy The Big Lebowski, The Dude really meshes with a lot of things I also like. Being laid back, taking life easy, being a slacker and generally trying to keep out of trouble. And The Dude is happy with his life being very minimalist and simple, as am I.

I think Angelino and Vinz would also like to have a simple life in some way. Maybe an apartment not full of roaches that Angelino more or less controls. Perhaps not having the police mysteriously after Angelino. And maybe not having a president obsessed with international terrorism and snuffing it out. 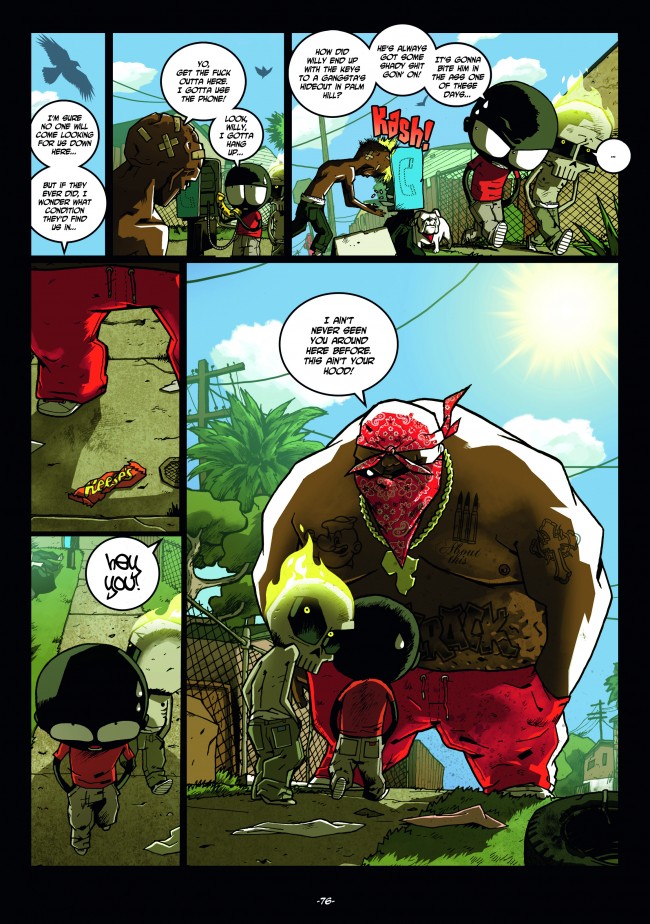 Again, RUN shows the time period in which he wrote this. In 2006, George W. Bush had only had one term by then and the war in Iraq was still very fresh in the minds of many. This is likely why RUN named the president of this US “Gore W. Tex”.

The story has a pretty clear anti-authoritarian stance, depicting the police more like an occupying force in California and the president like…well like Bush, I suppose. Moreover, even though the landscape is largely controlled by gangs it doesn’t seem like the police are much better.

The action scenes are pretty slick and easy to follow. RUN incorporates multiple styles in depicting the violence that goes on between the police and our protagonists as well as in the wrestling matches. Whatever is going on the action is pretty easy to follow and understand. It’s also fairly graphic and it’s worth saying at this point that the comic is definitely not all-ages.

Although there wasn’t much that struck me as bad in this comic nor was much of this comic outstanding either. 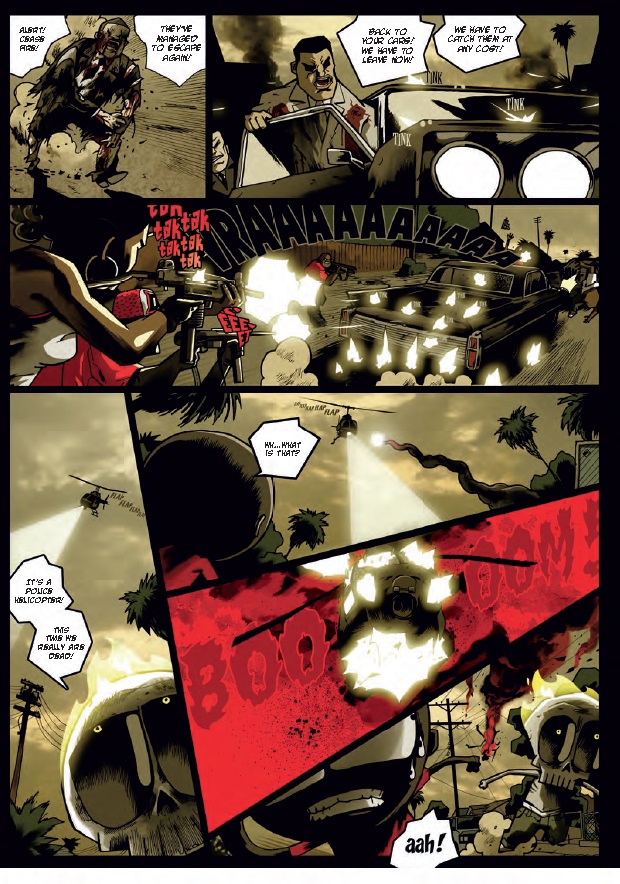 There’s nothing particularly new under the sun here despite the interesting future RUN has created. Part of the problem is that I don’t know that he taps into it as much as he could’ve. The landscape is certainly interesting and the characters aren’t boring but they also seem to be a little bland, not much characterization.

We still don’t know much about Angelino or Vinz or where they came from, etc. And while Angelino’s action scenes are cool they often just come across as quick deus ex machina moments than real and inspired moments of creativity and action.

There are also some bits of extra narration that sometimes interrupt or are interspersed throughout the comic. I think that RUN is trying to be playful with the narration here and have some throwbacks to old school narration. But it just comes off as disruptive and generally condescending to the reader. We know what’s going on with the story and it seems unnecessary to remind us seconds later. It’s like when someone writes a paragraph and then writes a paragraph later what that last paragraph proved or explained.

That all being said, [easyazon_link identifier=”1782762345″ locale=”US” tag=”bounintocomi-20″]Mutafukaz[/easyazon_link] is an interesting and an overall inventive read. I’m interested to see where RUN is taking this series and hoping it lives up to its promise of alien species and invasions. While Angelino and Vinz aren’t completely compelling characters yet hopefully we get more characterization in future volumes.

I really dig RUN’s art style and hope he continues to experiment with it as the volumes go on. I think the highlight of this story isn’t the characters (though they can be interesting as well) but the setting and I hope RUN emphasizes that more in future volumes.

The plot isn’t anything particularly impressive in terms of a story but it’s interesting enough to keep me reading and curious. That’s certainly something worth praising.

I’d recommend Mutafukaz and am interested to read more.