The Guardian is out in force promoting Batman #44 as somehow confronting police racism. However, is this truly the case? I hope by the end of this article this question is answered, but along the way I also intend to correct some blatant misinformation Spencer Ackerman spreads about [easyazon_link identifier=”B013XQ88EM” locale=”US” tag=”bounintocomi-20″]Batman #44[/easyazon_link] and letting you know what really happened in this issue.

MAJOR SPOILERS FOR BATMAN #44 FOLLOW. READ AT YOUR OWN RISK!

Spencer spreads misinformation straight from the get go. He claims, “the Dark Knight is investigating a black teenager in a hoodie shot dead by a frightened white police officer.” This is patently false. The black teenager in the hoodie is not shot dead by the police officer. Instead, he lies dead due to a massive fall. If you don’t believe me, here is the quote from Batman, “I’d agree if the shots had killed him. But I scanned him. He died from a fall. Dropped here. From about a thousand feet up.”

Ackerman decides to ignore this fact. He chooses to generalize the wounding of one person to represent some kind of institutional racism coming from the GCPD. I’m not sure how one can make the logical leap of seeing one person being wounded by a single police officer as institutional. It just isn’t. Albeit, the comic does include newspaper clippings hinting at a significant number of officer-involved shootings done against black individuals. However, it does not provide any context at all as to the reasoning of the shootings.

But let’s get back to how Ackerman misleads his readers by leaving out important plot details in order to sell his point.

“Duggio is shown frightened, emerging from a fight in his father’s bodega with a local gang, and before he can respond to Howler’s demand to lie down, the officer mortally wounds him.”

As I have already noted above, the gun shots do not mortally wound Duggio. He dies from a fall, not the officer’s gun shots. However, the bigger point is the fact that Ackerman fails to let his readers know Duggio is the one who started the fight in the bodega and in so doing he committed arson. He also doesn’t provide any context for the officer. Officer Ned Howler was responding by himself to a call about a gang fight. Duggio has just come out of the now smoke-filled bodega crouched over, one hand on his head the other by his waist out of sight of the officer. Howler asks Duggio to get on the ground twice before firing his pistol. 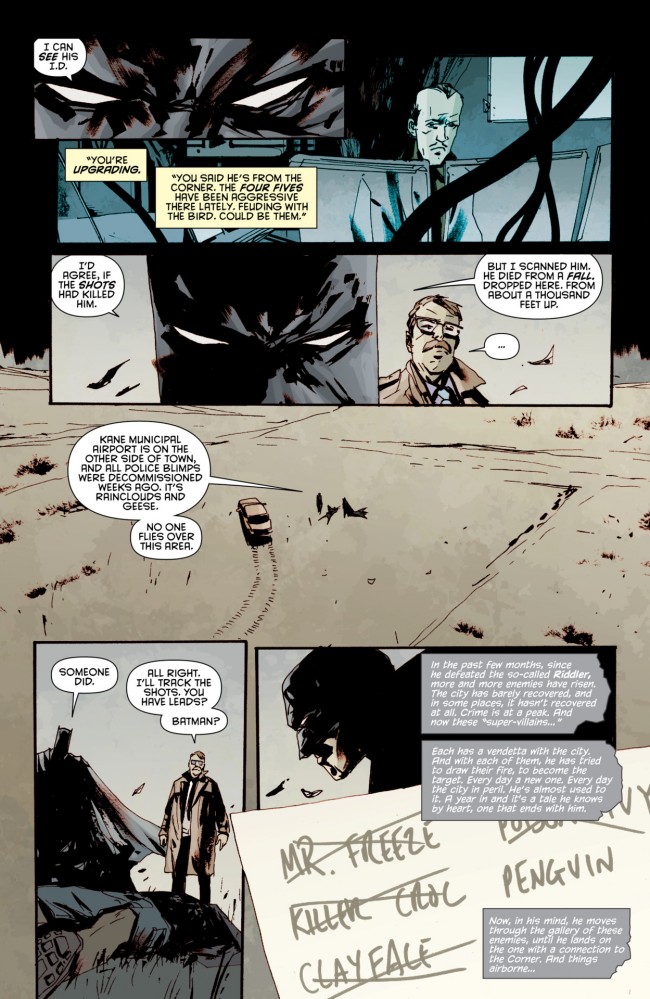 Now whether or not two warnings are a good standard is debatable. In my own opinion Howler was hasty to pull the trigger, but he was also under the impression he was going into hostile territory against rival gangs. Unfortunately, writer Scott Snyder helps Ackerman push his narrative by stating, “Of course you want Batman to beat this officer up, and be like, ‘How could you?’” I sure didn’t experience that emotion one bit. I’m not even sure Officer Howler actually did anything wrong. He ordered an arsonist to get on the ground twice before firing.
Snyder does acknowledge that continued violence against Howler “wouldn’t solve the problem. Batman throwing the officer off a roof, or throwing the officer in jail, it wouldn’t get to the heart of the matter at all.” While I agree with Snyder that having Batman throw Howler off a roof wouldn’t solve the problem I find it difficult to comprehend his suggestion about jail time failing to solve the problem. If people commit a crime violating natural law, they should be punished accordingly and prison might not be a terrible solution. Although, I want to reinforce that in this specific case I do not believe Officer Howler was in the wrong.

One of the other issues Ackerman brings up is Bruce Wayne’s involvement in the story. Ackerman notes “Batman must confront the hubris of his mission to save Gotham, as his focus on individual not structural answers set into motion the events that led to Howler killing Peter.” Again, Ackerman tries to reinforce the lie that Howler killed Peter. However, his main argument here focuses on Wayne’s announcement to develop the Corner, the neighborhood where the bodega is located. Wayne’s focus is on the individual, but it leads him to understand that certain structures are holding them back. One of them is the lack of opportunity.

In order to solve this structural problem, Wayne announces his development project. This sparks interest from investors or bankers in the bodega. Instead of sitting down and discussing the bodega business with the bank, Duggio turns to the Penguin and his crime ring. Duggio’s cousin confirms he never even attempts to talk to the bank about the future of his father’s bodega, “The Bank? The bank doesn’t listen to folks with no money.” However, Duggio does have money. He has the bodega and what looks to be one of the few successful businesses in the Corner. 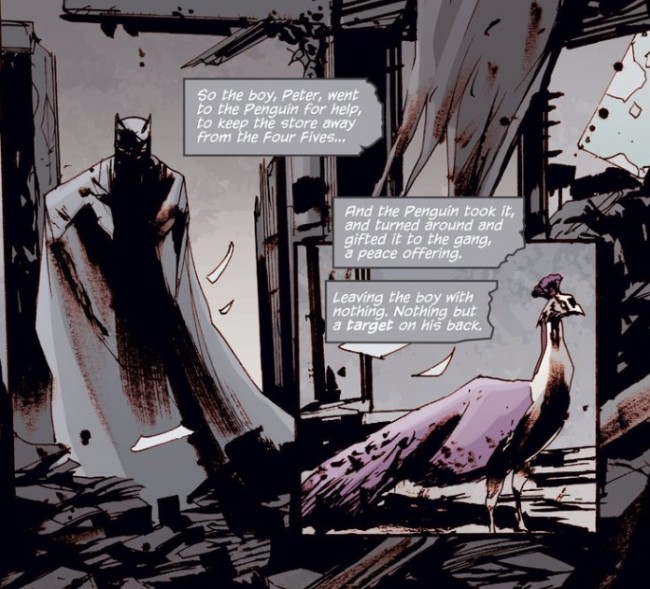 Unfortunately, Ackerman uses co-writer Brian Azzarello’s experience with a public housing project in Chicago to push his narrative. The problem in Chicago is unlike the problem in Gotham. In Gotham, Bruce Wayne, a private citizen, is announcing redevelopment with his own finances while the solution in Chicago is an attempt by the government to alleviate poverty with welfare. The Cato Institute’s Michael Tanner discusses how government welfare leads to increased poverty and how Wayne’s charitable actions are able to “individualize approaches and can target the specific problems that are holding people in poverty.”

If Ackerman’s narrative wasn’t clear enough, he concludes his article talking to “comics critic” Emma Houxbois. Houxbois believes the story holds “white readers accountable for their complicity in the real-world situations that the comic analogises.” This is disgraceful. The real-world situation analogized in the story is brought on by Peter’s own actions. Duggio made his choices and they involved making deals with criminals, assaulting another individual, and committing arson. “White readers” are not responsible or complicit for the actions another individual takes.

To conclude, [easyazon_link identifier=”B013XQ88EM” locale=”US” tag=”bounintocomi-20″]Batman #44[/easyazon_link] is not confronting police racism. Instead, the story exposes the crimes of Peter Duggio and the bad choices he made. It shows the tough and dangerous position many law enforcement officers face while on the job. And it also exposes how criminalizing drugs can lead to crime and violence. Spencer Ackerman’s take on Batman #44 is an ideological attack that manipulates the actual facts in the comic book to sell his narrative.