El Vengador takes on his first mission: cleaning up the streets of Los Angeles while his alter-ego, Oscar Gutierrez, looks back at the time spent with his father and little brother, Carlos, questioning what it means to be a hero. How does it fare?

Writers Seamus Kevin Fahey and Zach Craley begin [easyazon_link identifier=”B01605YI1U” locale=”US” tag=”bounintocomi-20″]Heroes Vengeance #1[/easyazon_link] with a question, “What makes a Hero?” and spend the rest of the story examining and answering this question as it applies to Oscar Gutierrez, El Vengador.

The story is split into two parts, the past where Oscar remembers going to wrestling matches with his father and little brother, and the present where Oscar dons his own wrestling mask and becomes El Vengador. At times, these two stories are told simultaneously with panels side by side and at other times separately.

Fahey and Craley don’t need to tell you about this distinction since the artist, Rubine, makes it abundantly clear in the settings where he has the two stories taking place. The past is in a brightly lit arena while the present is in a seedy, dark Los Angeles alleyway. There are some huge issues with the scenes in the past. Rubine sporadically places people in the stands, but then, in a subsequent close-up panel of Oscar and his family, the seats around them are all full. There are also two panels where there appears to be a cage being dropped on top of the wrestlers until you notice one of the wrestler’s hands going through the bars. It’s very distracting and is completely out of place. There are also a couple of newspapers referencing the events that are happening in the Heroes World that look sloppy with what appears to be photo shopped letters. It looks poor and unrefined. 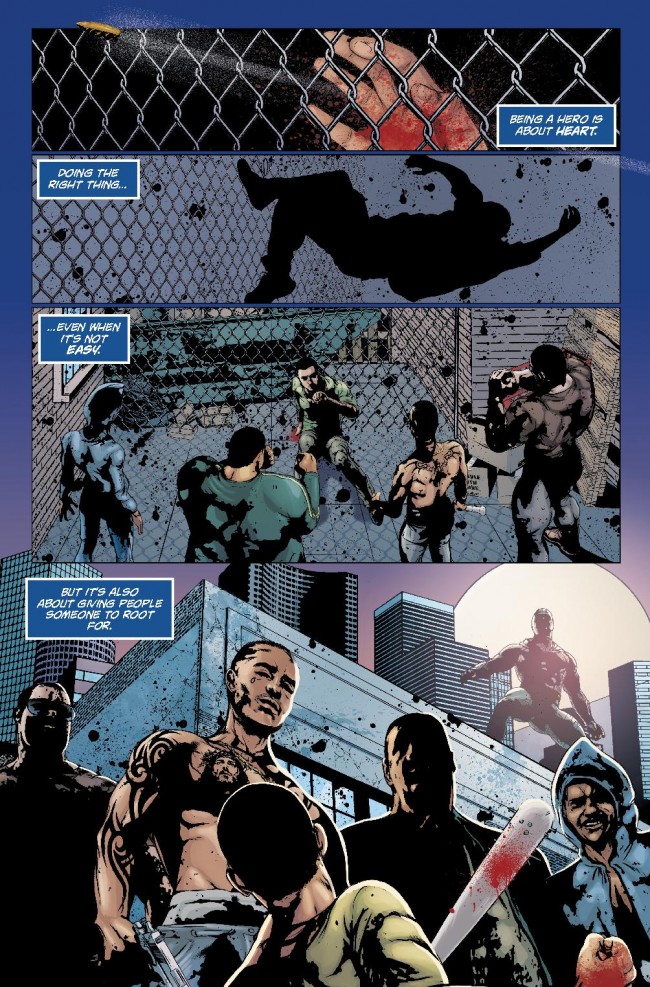 The present sequences have their flaws as well. At one point, El Vengador throws two gang bangers into a brick wall; as the wall shatters you see a blue background instead of the inside of a building. There is also a panel where the gang banger’s target’s hand looks as if the blood was spray painted on his hand. However, these scenes appear to have a lot more detail due to Rubine’s shadowing. He also places blood splotches on the surrounding buildings to add to the seedy atmosphere.

The fight sequences are well done. I really enjoyed how he set up a big throw with the placement of the characters’ arms. It allows you to easily imagine El Vengador lifting him over his shoulder and tossing him into a heap. He also does a great job of displaying emotions during the combat scene and he adds small details such as a tooth flying from a gang banger’s mouth after receiving a straight left to the jaw.

The overall story is pretty basic with a decent action sequence showing Oscar as El Vengador in action. Fahey and Craley discuss a number of definitions before revealing what a hero is to Oscar. The best part of the story is how they showcase Oscar’s growth in maturity from a young teenager to a man with his own family to take care of. 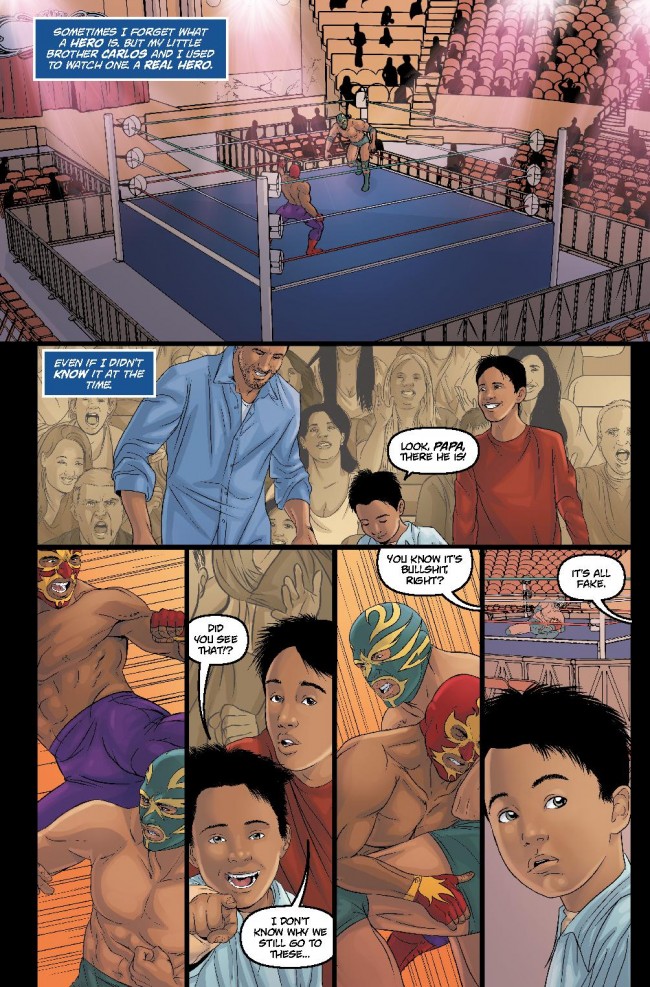 [easyazon_link identifier=”B01605YI1U” locale=”US” tag=”bounintocomi-20″]Heroes Vengeance #1[/easyazon_link] gives an inside look into the life of Oscar and the reasons he decided to put on the mask and become El Vengador. It has a nice action sequence, but the artwork in the wrestling arena was sorely lacking. If you want to learn more about some of the characters on Heroes Reborn it is worth picking up. It is also worth noting this issue felt a lot like a one-shot and didn’t have a cliffhanger although it does tease more El Vengador in the second issue.