After stopping by and chatting with Broken Icon Comics Eric Watkins, we ran into the other co-founder James Maddox and chatted with him about his book The Horror Show and why he doesn’t go back and look at old material.

BiC: We just talked to Broken Icon earlier today. They talked about your The Horror Show book. Do you want to talk to us and tell us a little bit about it?

James: [easyazon_link identifier=”1943513996″ locale=”US” tag=”bounintocomi-20″]The Horror Show[/easyazon_link] is kind of my love letter to horror comics. It’s got the cabin in the woods, its got kinda monstery things going on, its got three different twists in it that I have pointed it. It’s a really short book. Todd and I put it together just out of the love for the genre.

I had pitched this story to Todd during dinner after a show at some point and was like, “What do you think? Is this any good?” He was like, “Yea you’re insane if you think I’m not going to do this book.”

We put it together and when we put it out it was just a one-shot and people liked it. Like a lot. More than I thought anybody would like any book. They liked that one-shot.

I talked to Eric over at Broken Icon and he said, “Can you pull off at least two more?” I was like, “Yea I can totally do that.” We just put it in trade form. Mark Kidwell did the cover. I’m really really proud of it. 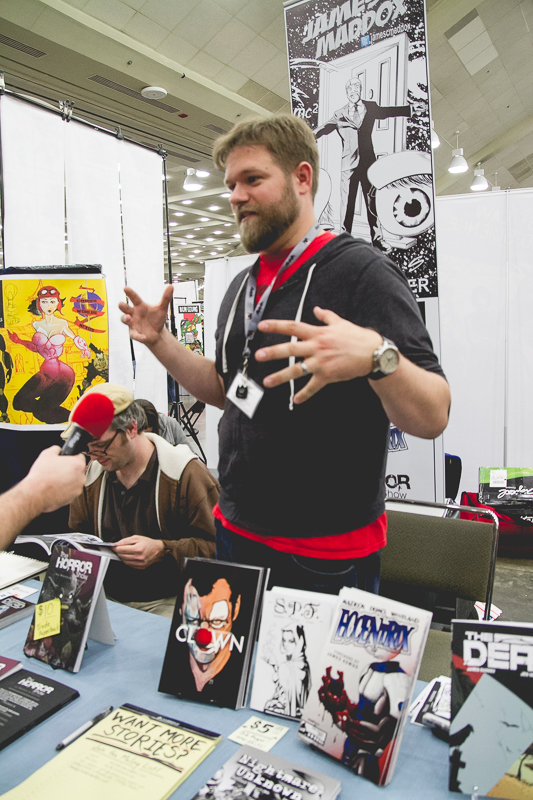 BiC: Are you going to do any more?

James: Nah, nah. I like doing the stand alone stuff. I told the story I needed to tell.

For The Horror Show, I had a set agenda which was to manipulate my reader to feel bad for the bad guy. I feel that it came off alright.

The Dead is another one. It’s six issues. For that particular story it is done. Jen and I have talked about maybe doing another four here in a couple of years. For the most part I’m happy with where it ends.

As far as on-going series, I’m an indie guy. You aren’t going to see me for another year. I’m going to get you walking away with something you really like so when you come back to me the next year, I’ve got something new and you’re going to read it.

BiC: Speaking of something new, what are you working on right now?

James: Right now I just came out with this ashcan called SPF with Rob Dumo. We also worked on the book the Eccentrix together which is an idiot superhero story. Clown just came out and [easyazon_link identifier=”0985509473″ locale=”US” tag=”bounintocomi-20″]The Dead[/easyazon_link] just came out in trade paperback form.

I’ve got three stories that I am scripting right now, but they probably won’t be seen from until late next year.

BiC: We heard about the origin story of Broken Icon and how you started in a taco shop. Do you have another version?

James: No, that’s pretty much it. We wanted to do something in comics and we didn’t want to wait for it to be approved. It was very much a let’s get something wrong. We had the ambition to make books. As long as we could do that and see if people liked it because if nobody liked them then we would be like whatever. For the most part, we had the ambition to do it and we just did it. 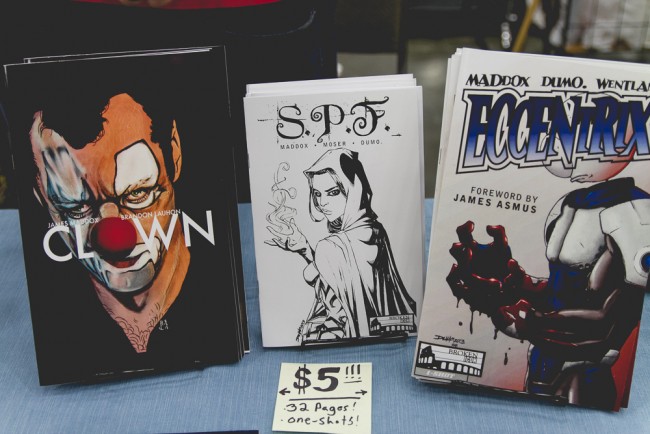 BiC: Where did that ambition come from or how did you get started?

I definitely feel that the comics industry in particular is filled with a bunch of people that like to do their own thing.

It’s fun to really meet people at convention that have the ability to go out and make a book. It’s a hard thing to do when you think about it. And podcasts and magazines. All of those things take gumption. To actually go out and finish it and edit it and polish it and make it look good. If you pull it off that’s amazing!

When I started getting into comics, I realized there was a community here that not only were other people trying to do the same thing I was trying to do, like Eric over at Broken Icon, we were all ready to help each other out. Give support. Give critique when it needed it. It was all geared towards making the thing. Doing the thing. That kinda stuck with me. I guess I just found my community.

BiC: You said you did a lot of short stories and novels that kind of went to the wayside. Do you ever go back and look at those that maybe inspire you with your comics?

I’m a pulp writer. I write really fast. I hit the points I want to hit and I move on to the next thing because I’m excitable that way I guess.

To go back and revisit other stuff, it doesn’t not happen, but its not likely to happen because I get excited about new ideas, new concepts, new approaches to story. That is the kinda stuff that gets me excited to write a story. To go back and read stuff that maybe wasn’t as polished as I would like it to be now would make me cringe a little. Better to just leave it in the dark.

BiC: Thank you very much and hope you have a great Con. It was great talking with you.

James: Alright. Thank you too.