The Kraang have invaded Manhattan and have been rounding up people, destroying all hope. However, there was one who decided to stand up and bring the fight to the Kraang. Will he be able to liberate the city or will he too fall to the Kraang? How does it fare?

The story pretty much follows Slash as he wreaks havoc upon the Kraang with his partner, Pete, a mutated pigeon. That’s pretty much all that happens minus an oddly placed flashback page which might make sense later on in the story line, but at this point it appears completely random and doesn’t serve a purpose.

The dialogue was enjoyable. The back and forth between Pete and Slash not only highlights their differences, but also the different tactics Slash uses versus those of the Turtles. He charges head first, using blunt tactics in order to solve his problems instead of using stealth and subterfuge and the way of the ninja. The Kraang’s dialogue is also fascinating and somewhat comical as they repeat themselves and define what certain objects are used for. 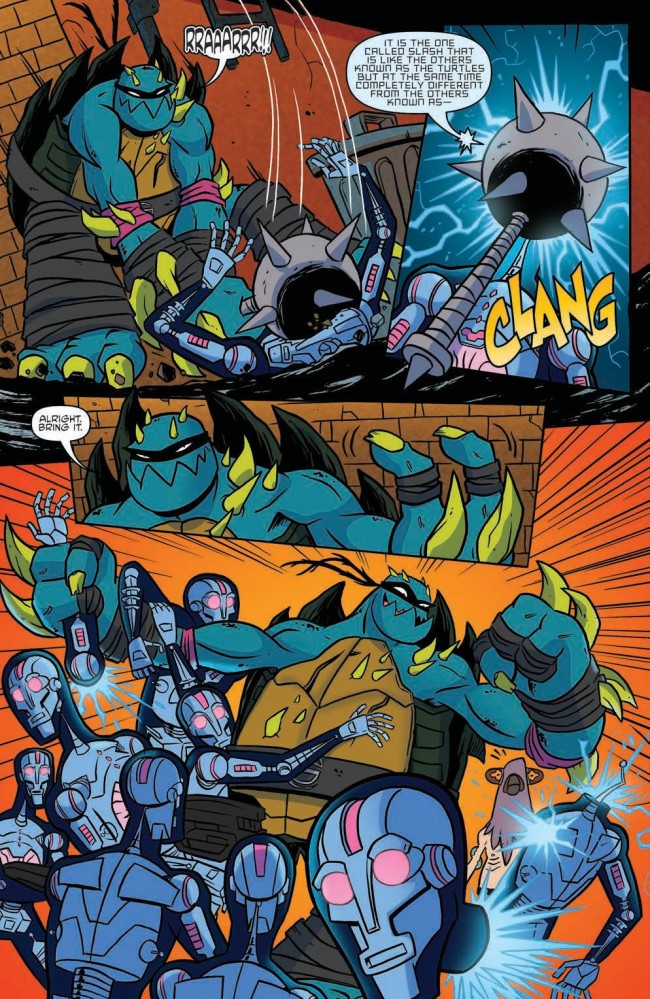 Chad Thomas’ artwork continues to deliver exciting action sequences. However, towards the end of the issue, it is unclear how Slash is subdued as it appears he is using a Kraang to shield himself, but is shown in a subsequent panel lying flat on his face. Another major issue is the fluctuating size of his mace. In some panels it is massive while in others it appears miniscule in his hands.

Heather Breckel’s colors highlight the action sequences using a good mix of orange, yellow, and red to denote a number of different action panels and to depict the escalating violence. She also makes it clear that the one page is a flashback by making the page devoid of any colors besides an extremely muted maroon that borders on grey.

The secondary story by Ben Costa is a nice little addition that focuses on Michelangelo and his friend from the bayou, Napoleon. It is a fun little story, detailing the two having a fun evening in New York City. The dialogue is humorous and light-hearted, but also examines how you can be labeled an outcast even when you are standing up for what is right.

The art is a bit cartoony for my taste, but it easily tells the story and has a good flow and layout. 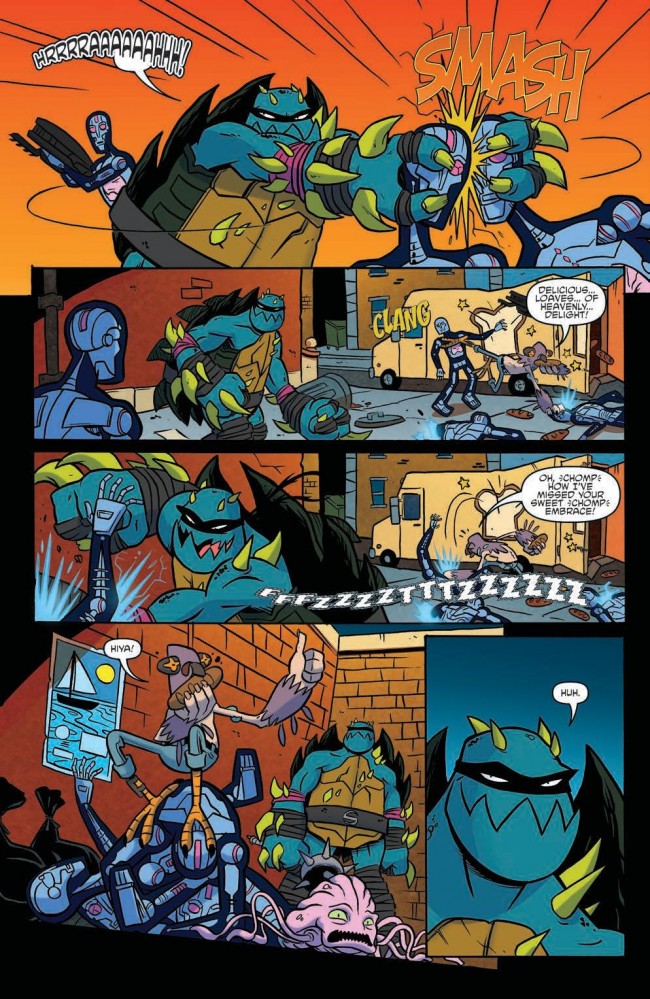 [easyazon_link identifier=”B0163J1I0W” locale=”US” tag=”bounintocomi-20″]Teenage Mutant Ninja Turtles: Amazing Adventures #3[/easyazon_link] is an action-packed story that introduces you to the blunt force and personality that is Slash. However, the story doesn’t get any deeper than the action sequences. The art was solid; although, the differing mace sizes were distracting and the way Slash is subdued wasn’t really clear.

The secondary story was fun with action, friendship, and a deeper message on doing what is right. In Michelangelo’s words, “That’s all that counts.” The art was a tad too cartoony for me, but it had good panel layouts and clear action sequences.