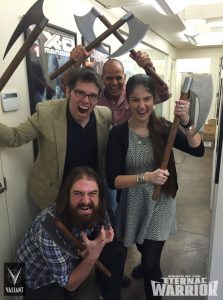 “WRATH OF THE ETERNAL WARRIOR #1 is already on track to become one of Valiant’s single biggest releases of the year, and we want to give our retail partners a razor-sharp token of appreciation for making 2015 Valiant Entertainment’s most successful year yet,” said Valiant Publisher Fred Pierce. “There is a long-term plan in place for the Eternal Warrior, and, as you’ll soon see in WRATH OF THE ETERNAL WARRIOR #1, the character is about to take his rightful place as one of single most important heroes in the Valiant Universe. What better way to show the world we mean it than with a two-handed implement of destruction in stores nationwide? Whether you’re a dedicated fan or a 7,000-year-old immortal soldier, these distinctive comic collectibles will be the ultimate accent to your local comic shop, bar none.”

If you haven’t yet checked out the Wrath of the Eternal Warrior #1 Preview make sure to do so!