The rebellion isn’t just an army fighting against the tyranny of the Empire. It also employs spies and assassins in its war against the Empire and their next target is the Emperor! How does it fare?

[easyazon_link identifier=”B017V608Z2″ locale=”US” tag=”bounintocomi-20″]Star Wars Annual #1[/easyazon_link] tells the tale of Eneb Ray, a Rebel spy, on Coruscant masquerading as Tharius Demo, an Imperial tax collector. While the story is based in the Star Wars universe with the Emperor being front and center and Princess Leia making an appearance, the story feels much more like Mission Impossible than Star Wars. This isn’t necessarily a bad thing. In fact, it is actually a good thing. It expands upon the Star Wars’ canon opening up the potential for a plethora of other stories and missions on Coruscant and beyond, focusing on Rebel spies and assassins, something we are completely unaccustomed to.

Writer Kieron Gillen uses an internal monologue to get us inside the head of Eneb Ray. While I usually prefer dialogue to internal monologues, the internal monologue in this case works wonders because Gillen aptly captures the conflict raging in Ray’s own mind between keeping his ruthless cover as an Imperial tax collector and wanting to help those who find themselves subjected to the jackboot of the Empire. 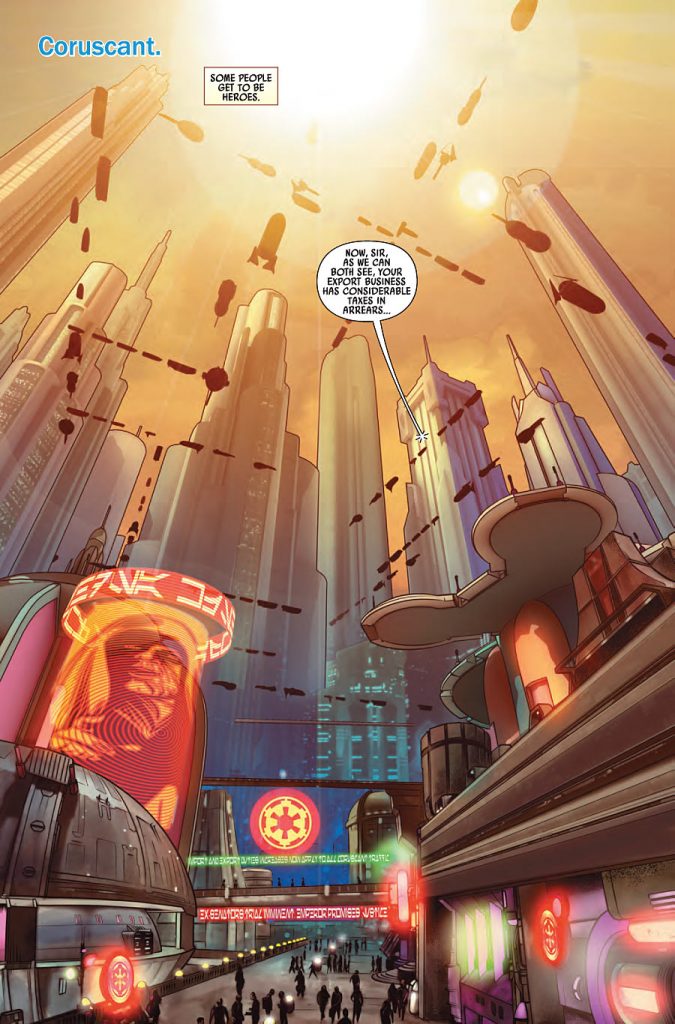 Not only does Gillen provide an excellent characterization of Ray through the internal monologue, the unfolding of the story also puts to rest the question of whether or not the Empire is villainous. Gillen puts on full display the Emperor’s villainy in multiple plot elements including the execution of political opponents.

Speaking of the Emperor’s villainy, Gillen includes some nods to the old EU canon in the story that fans will enjoy. These nods keep the story lively and push the internal conflict raging within Ray.

However, the issue fails to have an actual conclusion. It just ends. You think there might be more; however, upon flipping the page you only find more ads. It is actually quite baffling and it appears a character from the beginning of the story returns at the end, but you can’t really be sure if it is the same character. It definitely leaves you with a ton of questions and has your imagination running wild with what happened.

Angel Unzueta’s artwork is serviceable. He does a decent job of capturing the sliminess of an Imperial tax collector with Tharius Demo’s character design. There are some panels where the shadowing he uses makes him look downright evil. However, in other panels the shadowing can make it look as if he is talking out of the side of his mouth. The panels are also very barren. There aren’t a lot of background details as he heavily uses the foreground in most of the panels. 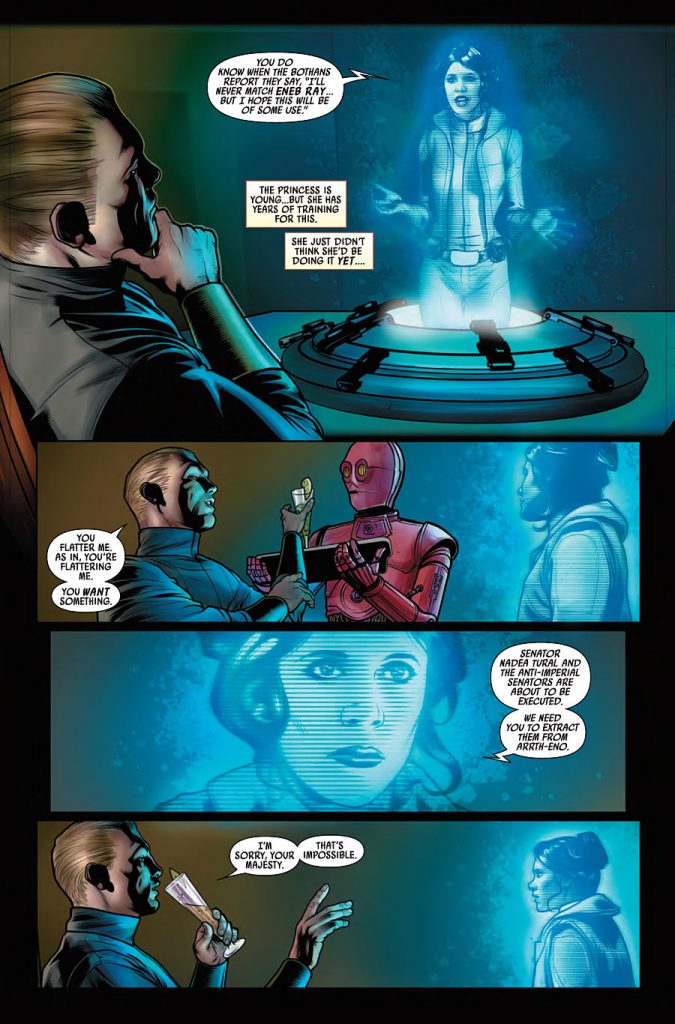 The action was fun and exciting. I’m definitely not up to snuff on my Star Wars’ weapons, but it appears he introduces a new weapon that Eneb Ray uses that seems to function much like a Taser. There are also some great subtleties he uses when drawing the Emperor.

Paul Mounts does a decent job with the colors. I especially liked the filter he used when depicting Leia as a projection. He also keeps the story on the darker side (literally) as it takes place in the heart of the Empire. The panels are only brightened when depicting the Rebel sympathizing Senators with their green and purple robes.

[easyazon_link identifier=”B017V608Z2″ locale=”US” tag=”bounintocomi-20″]Star Wars Annual #1[/easyazon_link] is an intriguing read with lots of Mission Impossible characteristics. It opens up a number of different storytelling options for Star Wars books moving forward by introducing a Rebel spy in the heart of the Empire (something we knew existed but never had been fleshed out before). Despite compelling storytelling throughout much of the book, the ending is very unsatisfying and just leaves you hanging and confused. Unzueta’s artwork is decent, but his shadow usage can hinder certain panels as well as others being just too plain.