In Robbie Thompson and artist Todd Nauck’s upcoming Amazing Spider-Man/Silk: The Spider(Fly) Effect, Spider-Man and Silk team up on a journey through time.

However, before the time-traveling adventure can begin Robbie Thompson and Todd Nauck have to learn the ropes and overcome the challenges presented by the Infinite Comic format.

“The approach to this story was totally different from any other writing I’ve done in comics,” Thompson confesses. “Basically, [editors] Jordan D. White and Nick Lowe and I got on the phone and hashed out the basic idea for the story. Then I plotted out the details and we traded that document back and forth, building out the story. When I was in New York, we did a writers’ room for the upcoming Spider-Women event, and Dennis Hopeless and Jason Latour also offered some fantastic advice for how to write to the strengths of Infinite Comics as the process moved on, which was a great deal of help.” 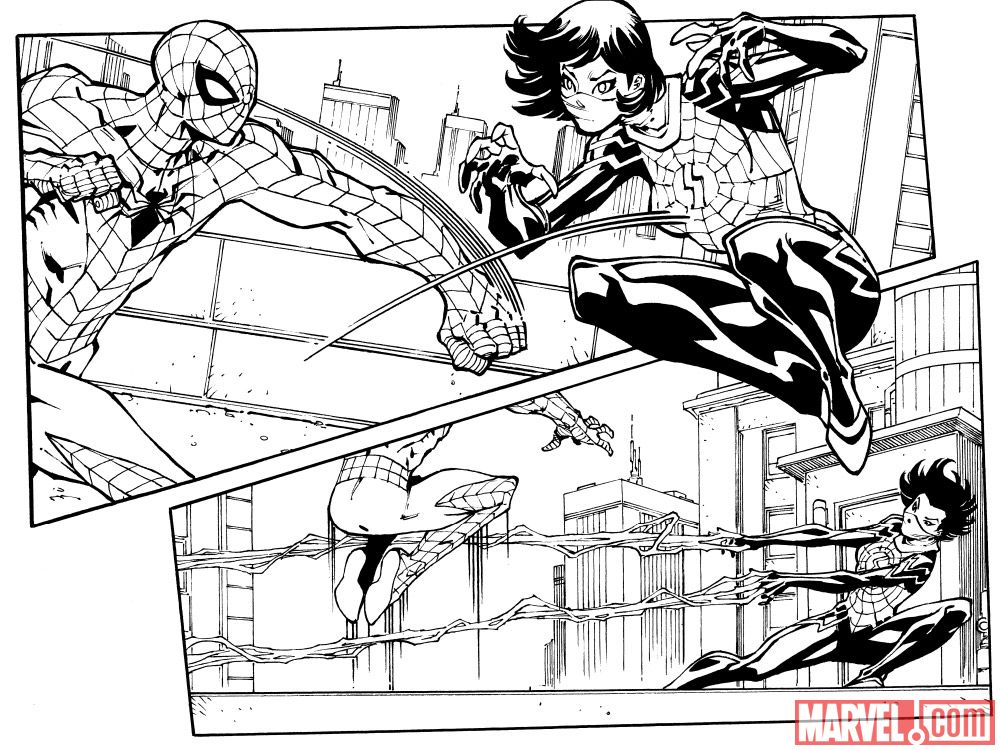 “It’s not drawn like a regular comic book page but rather a series of screens since the book goes digital first; the book will go to print shortly after,” Nauck explains. “Panels are animated to overlay the previous screen as the story progresses. Or a shot of Spidey is animated when he shoots a webline so I have to draw a couple extra shots of Spidey so the tech crew can assemble all the art to animate in the right way.”

Not only did they get advice from Dennis Hopeless and Jason Latour, but Infinite Comic storyboard artist Geoffo was key to their success.

“Geoffo breaking it down in layouts has been helpful and collaborative,” Nauck asserts. “It’s been a fun learning experience and cool new ways to tell comic book stories!” 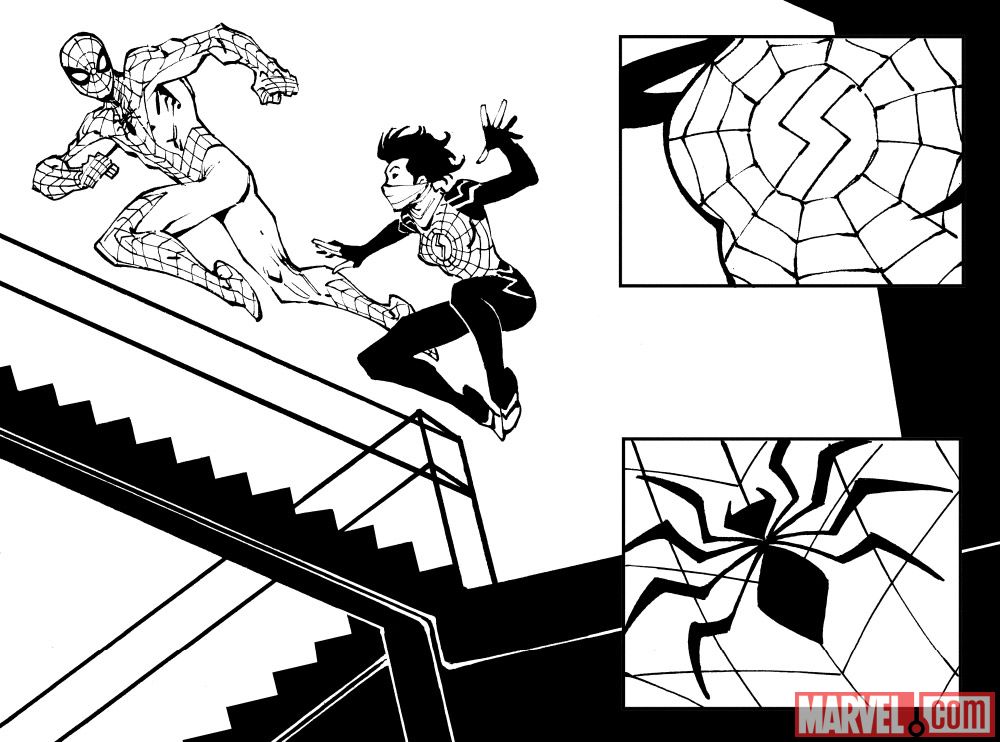 Both Todd and Robbie were also very complimentary of each other.

“Todd Nauck was the absolute perfect choice for this book, and I owe a ton to Jordan [White] for bringing him on the team,” enthuses Thompson. “His style is so fluid and tight, and he can easily evoke both the past and present. It’s so detailed and expressive.”

“I love Robbie’s writing,” Nauck replies in kind. “His first issue of the new SPIDEY with Nick Bradshaw is fantastic! He delivers a perfect tone and voice to Spider-Man stories so it’s a very comfortable and classic fit for me.” 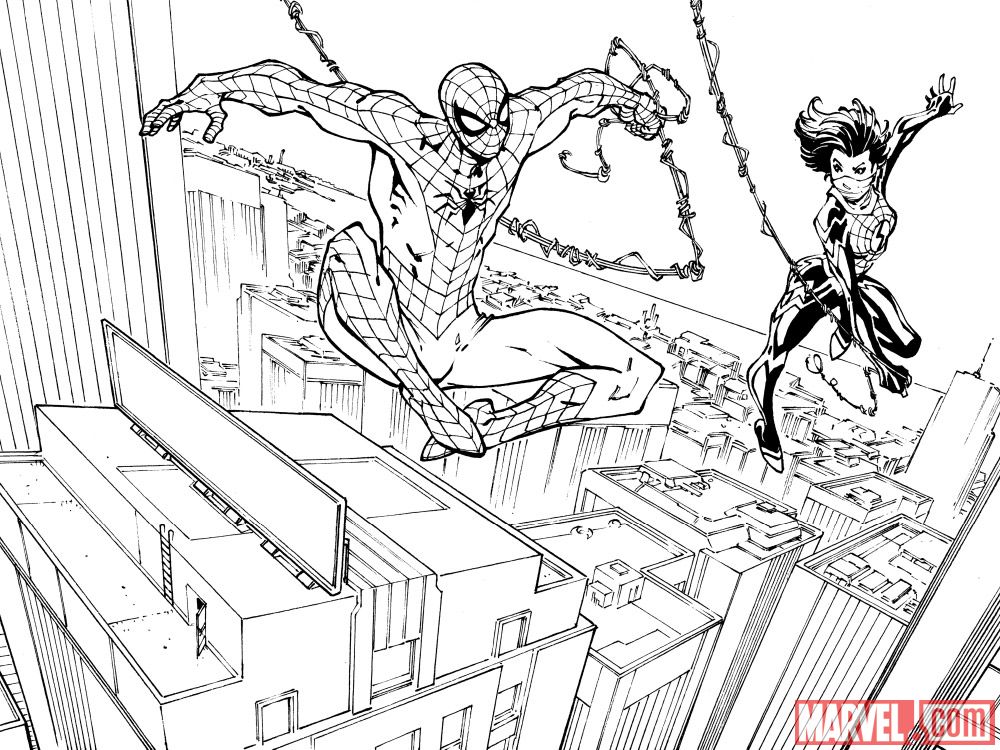 After understanding and figuring out the Infinte Comic format, the two creators set about piecing the story together and making sure it was grounded in the current continuity.

“Our story takes place between SILK [issues #2 and #3],” Thompson reveals. “At the end of #2, they are pulled away and drawn to a mysterious figure in a mech suit—a mech suit that can travel back in time.”

“It’s bittersweet for both of them,” he continues. “For Peter, his life before the spider bite was so much simpler, and in some ways happier—his Uncle was alive, and his biggest concern was not getting beaten up at school. And for Cindy, her family was actually together and her life was simpler, too; she had no idea 10 years of her life were about to be completely taken from her. There’s also a lot of fun to be had with them seeing younger versions of themselves. Those contrasts are a lot of fun to play with in the story.” 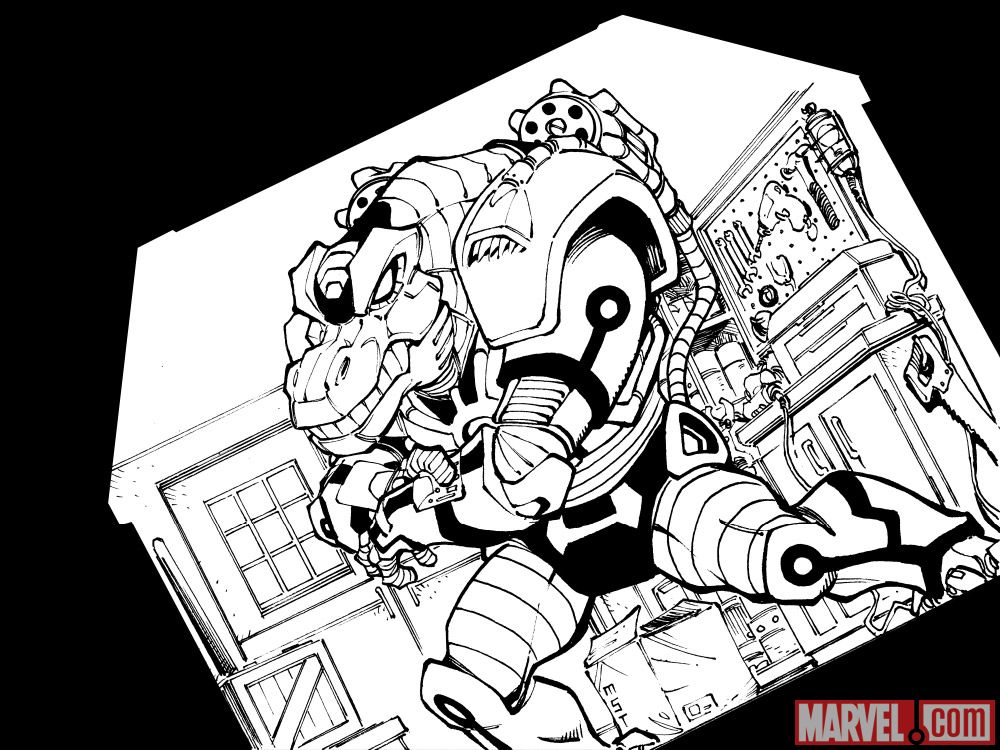 Another challenge Nauck faced was dealing with Marvel’s past and how time works within the Marvel Universe.

“That’s a really interesting challenge,” he admits. “It’s a bit of a juggling act in how to make things look like they’re in the past, but not dated to solely one point in time. Especially considering time moves so much slower for the characters in comic books than the real time we experience.

“Fortunately, fashions are cyclical. Trends tend to repeat. I can clothe someone in 60’s, 80’s, or 90’s fashions and it could still be retro and current simultaneously. I‘ve been dropping in subtle changes to things in the story like plastic trashcans in the present but when they go back in time those trashcans are now old, beat up metal ones.” 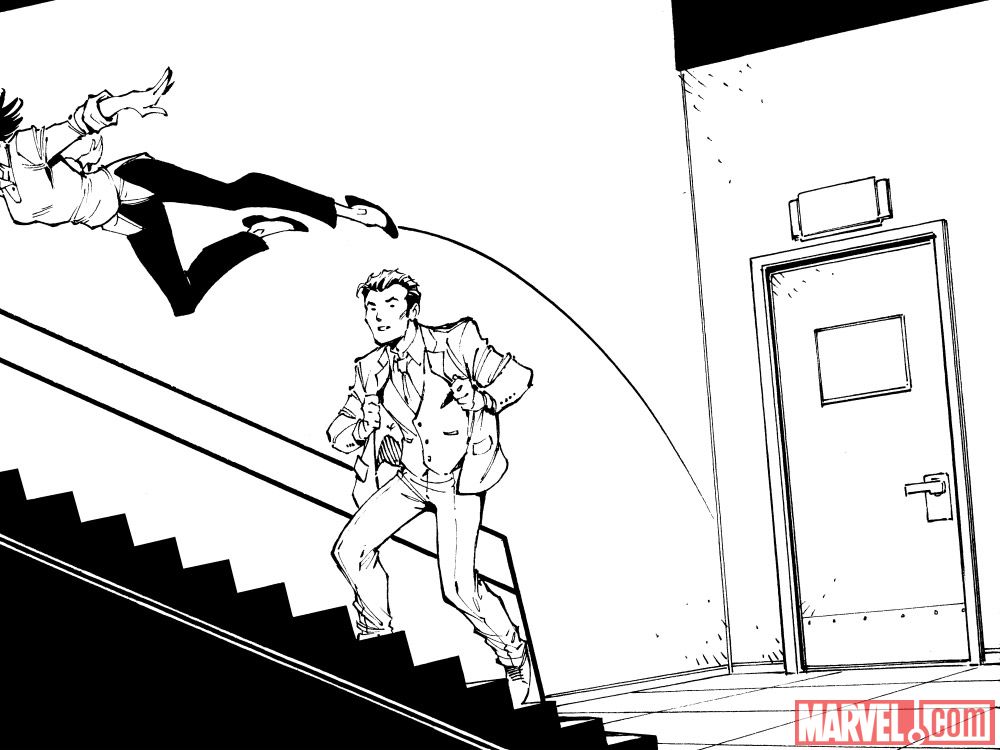 Despite the challenges posed by the Infinite Comic format and the time-traveling component of the story, Nauck is as excited as ever to get back to drawing Spider-Man as well as taking on Silk for the first time in a story.

“It’s always great to return to a Spidey project,” the artist exclaims. “My art is continually evolving as I strive to drawing things in new and better ways. So my rendition of Spidey continues to evolve as well. Since this story features the All-New Spider-Man, there are some variations to his costume design. I think I’ve gotten a handle on it and it’s a lot of fun to draw!”

“This is the first time for me to draw Silk in a story,” Nauck points out. “Prior to starting this gig, I did some character studies to try and get a better feel for drawing the character. It’s been fun getting to know the character even better.” 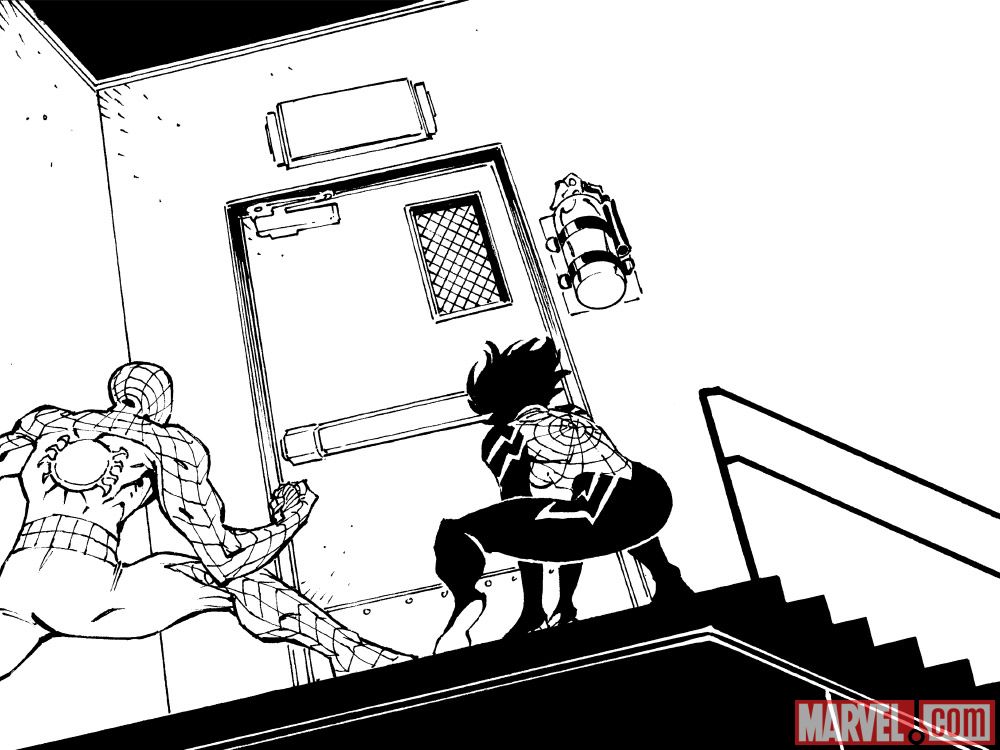 “For Peter and Cindy, they will always be tied to each other by their spider bites, but they’ve chosen to be friends, resisting the forces that thrust them together and defining their relationship on their own terms. Or at least trying. And it’s complicated, especially since Peter is a far more experienced hero than Cindy. But I think you’ll see in this story that they really do care for and look out for one another.” 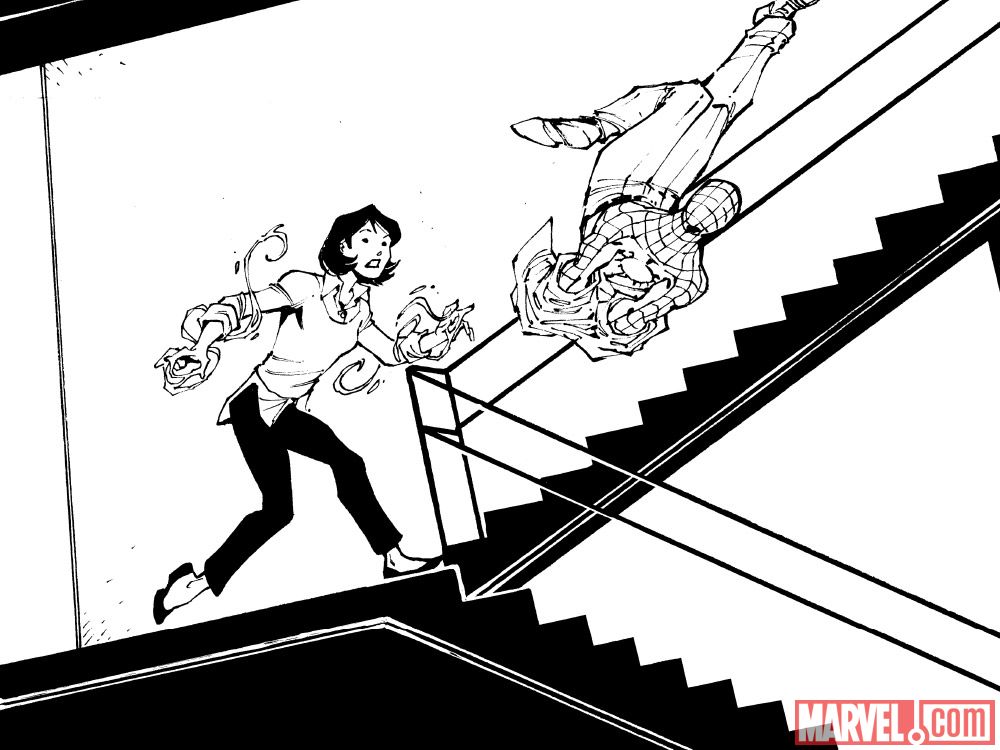 “I think the appeal of time travel stories is that they can be a fun combination of wish fulfillment and cautionary tale. With Peter and Cindy, their shared history allows for us to shine a light on part of their lives that we all know, but allows us to let them see their lives from a different perspective, which is especially interesting to play with in light of their current status quos.”

Amazing Spider-Man/Silk: The Spider(Fly) Effect will be released on March 2, 2016.