The bums and hobos of First Coast City have been living under the oppression of Philip “The Ax” and a number of factions are fed up with his tyrannical rule and plot to overthrow the oppressor. However, the differing factions can’t decide whether to make the changes peaceably or through violent action. How does it fare? 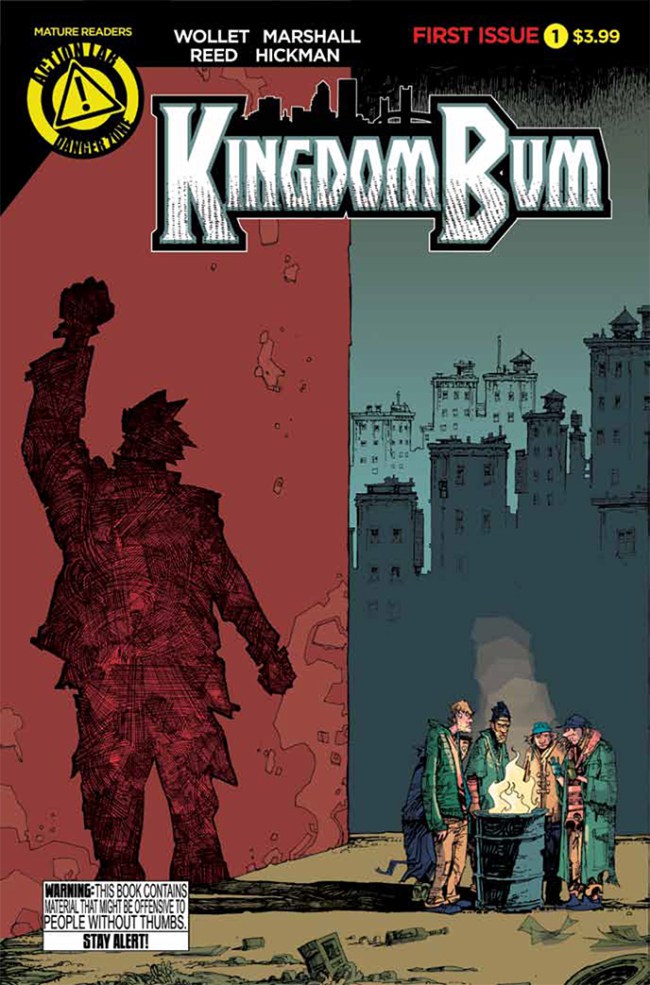 [easyazon_link identifier=”B018UKCH98″ locale=”US” tag=”bounintocomi-20″]Kingdom Bum #1[/easyazon_link] is definitely an idea out of left field, taking the palace intrigue genre and setting it within a group of hobos, homeless, and bums. However, once you get past the sheer weirdness of the setting, the book has all the makings of a solid palace intrigue story that also ventures into sociopolitical commentary.

Writers Adam Wollet and Rick Marshall split the issue in two halves. The first half focuses on the past when The Ax is ruling the hobos, while the second half takes place in the present. The story grabs you on the first page with a hobo sect already plotting to overthrow The Ax. The dialogue among the hobos is exactly what you would think it would be from a small group of idealists hoping to enact their own version of rule. Yet, these are hobos and Wollet and Marshall remind you of it with some great comedy as they are run out of the donut shop they are squatting in. This is a theme that will continue throughout the issue, having bums and hobos talk about big philosophical ideas or plot elaborate schemes only to be quickly reminded these are people who live on the street or in some cases in dumpsters. 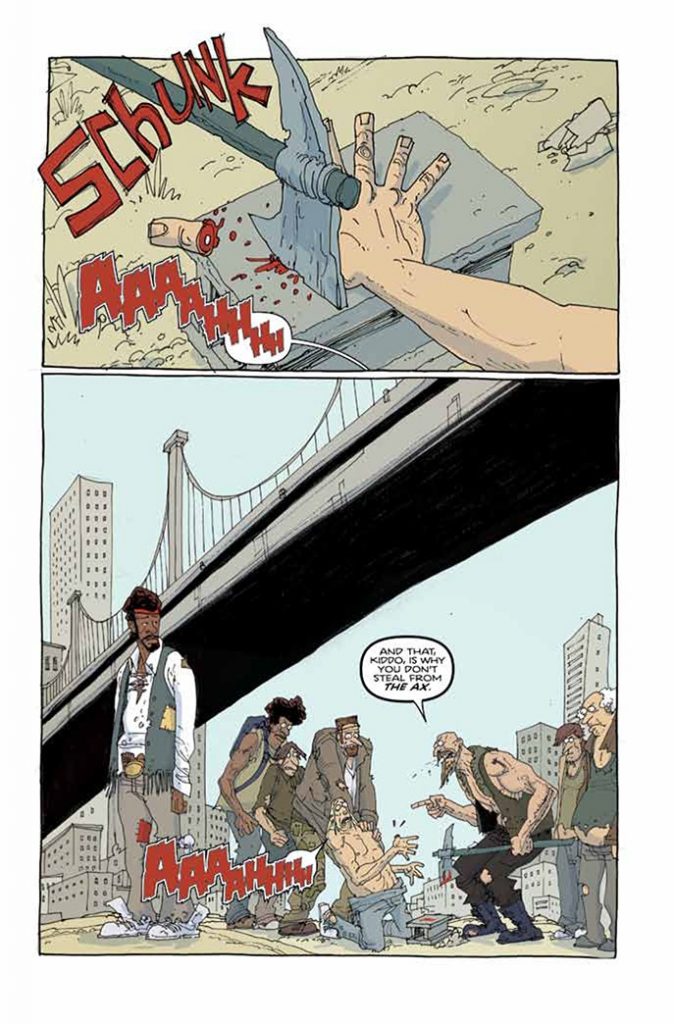 The split in the stories also allows Wollet and Marshall to examine different systems of government or ruling. They provide a clear contrast between The Ax and Simon, who succeeds The Ax. The first is tyrannical, demanding individual tribute, while the second is more ordered and structured with specific groups of hobos divided by labor, contributing to the welfare of the entire kingdom. It is unclear what exactly the punishment for failure is in the second setting.

The main characters are all engaging and unique with their own distinct personalities. The Ax is a ruthless dictator, demanding people follow his way or else they face the ax, literally. Simon is an idealist who believes in non-violent solutions, yet prospers from the violence of others. Edmond is a radical revolutionary who isn’t afraid to use whatever means necessary to achieve his goals. There are also a few characters that are not fully fleshed out yet that look to play major roles in the story moving forward. It will be interesting to see what role they will actually play in the story.

Not only are there some characters who are still mysterious, but towards the end of the issue Wollet and Marshall introduce a whole new sect of hobos that bring the story full circle. This new sect adds a ton of intrigue as you wonder who they are, what their motivations are, and what kind of challenge they will pose to Simon. 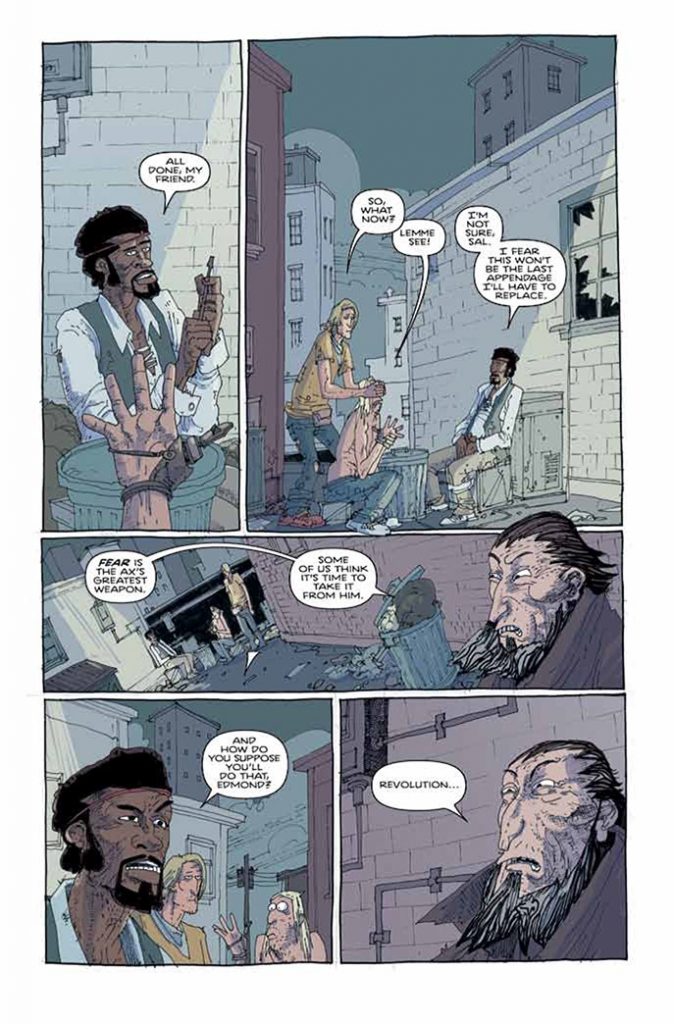 When I first saw the preview pages for Kingdom Bum #1, I was a little leery. It isn’t a style I usually take a liking to, but in this case it fits the story Wollet and Marshall are telling. Many of the character’s features are exaggerated whether it is a nose, cheeks, eyeballs or hands. This exaggeration adds to the dirtiness and showcases the horrible conditions living on the street has done to the characters. There are some issues, especially during profile shots, where a character’s eyes can be set almost on top of each other. There were also a few panels where the image doesn’t match up to the emotion being conveyed by the lettering. For example, Simon is proclaiming his new kingdom, yet he doesn’t look excited or enthusiastic. He just looks normal without really conveying any emotion.

As for the lettering there was one minor mistake where one of the tails from the word clouds appeared to end at a trashcan. You might think this is weird, but there are characters who live in trashcans and dumpsters in this story. However, in this instance there was no one inside the trashcan. Needless to say, it was a little confusing.

[easyazon_link identifier=”B018UKCH98″ locale=”US” tag=”bounintocomi-20″]Kingdom Bum #1[/easyazon_link] is a surprisingly interesting story with palace intrigue, colorful characters, and a little bit of sociopolitical commentary. If you thought hobos couldn’t have grand conniving master plans or utopian dreams, you are wrong! The artwork, although not my personal taste, fits the story well with exaggerated physical features, although there are still some minor technical issues that show up during profile shots. If you are looking for a refreshing take on palace intrigue, you should pick this one up!