Darkseid is dead and a new group of Gods have been made. Batman now sits upon the Mobius chair, Superman has been infused with the fires of Apokolips, and the Flash has bonded with the Black Racer. Grail, her mother, Myrina, and the Anti-Monitor are still on the loose while Darkseid’s followers continue to battle the Justice League. How does it fare? 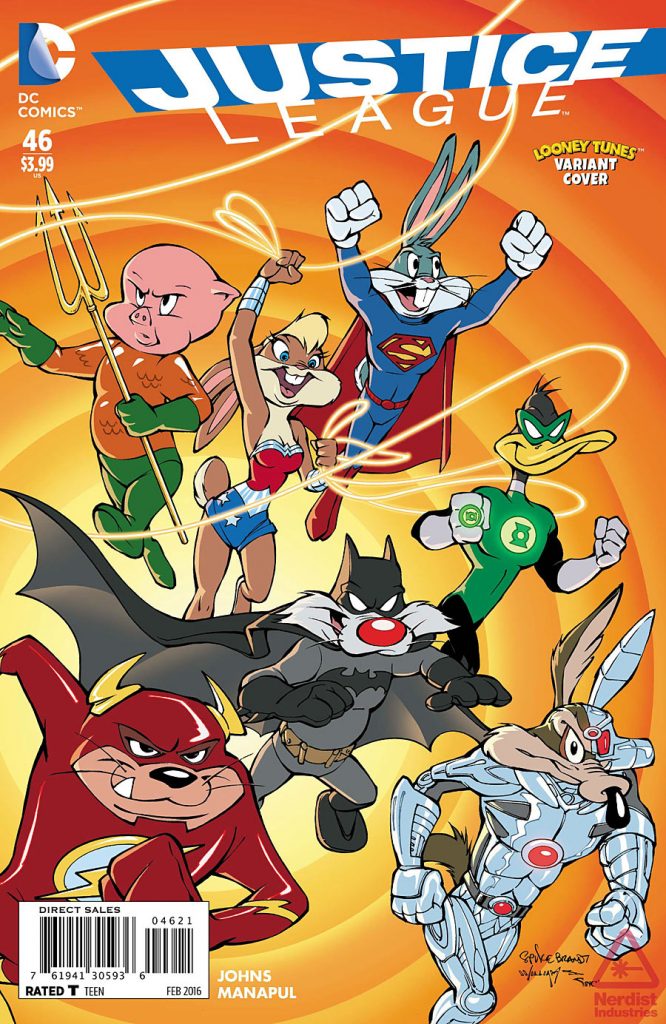 [easyazon_link identifier=”B0189Y55MQ” locale=”US” tag=”bounintocomi-20″]Justice League #46[/easyazon_link] is the second installment in the second chapter of “The Darkseid War” saga. The Justice League is splintered with the core members each on their own. Writer Geoff Johns attempts to give page time to each of them, but in order to do so he sacrifices coherent storytelling. The book is an absolute mess as Johns jumps from character to character with little to no transition. To make matters worse, it isn’t just character transitions from Wonder Woman fighting in one location to, say, Batman in Gotham. It is transitions in the middle of a battle as well. Wonder Woman will be fighting Kalibak in one panel and then in the next panel we see the non-Green Lantern Jessica fighting Volthoom.

He will give us maybe a page with Metron and then another with Superman that don’t really progress the plot or provide anything at all. It is quite baffling how these pages even made it through the editing process. Continuing with my tirade on the transitions, towards the end it becomes completely unbearable. Johns introduces the new Superman pretty dramatically and then just leaves it, choosing to show us what the other members of the Justice League are up to like seeing the Flash run or Shazam fly through space. Not to mention, you have absolutely no clue who is providing the narrative throughout these panels. You think it is Superman, but after three pages, you find out it isn’t even him! 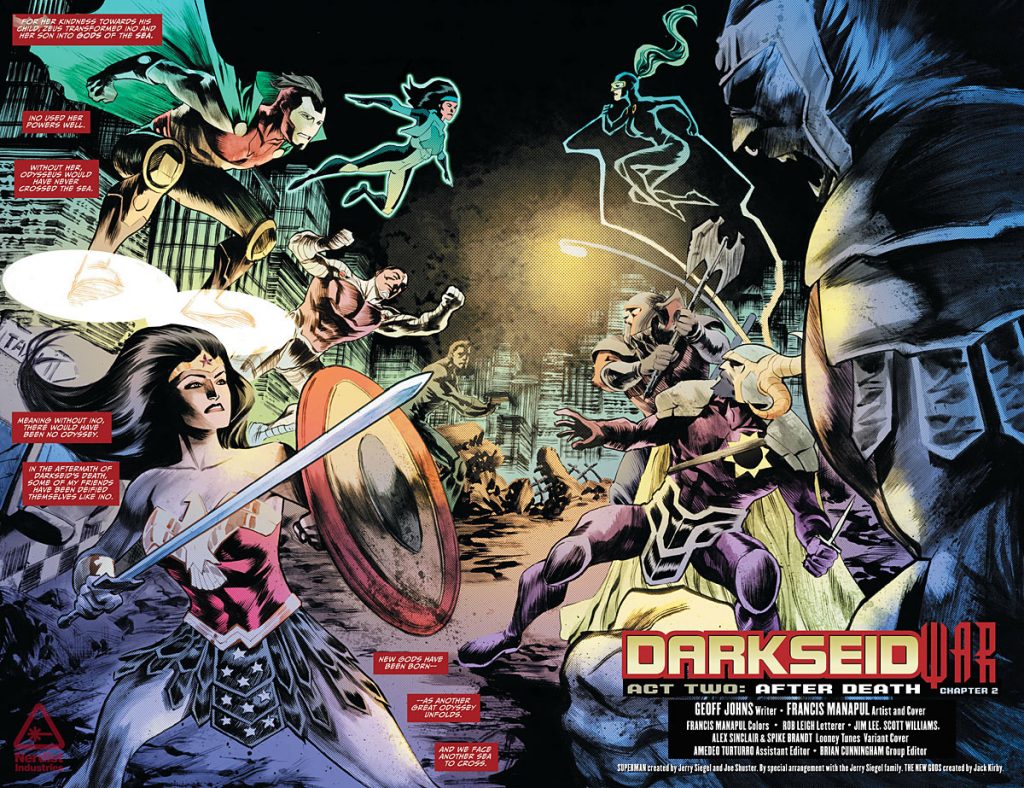 I will give Johns credit for the one actual coherent storyline in the issue with Mister Miracle. It is dramatic and exciting. It also provides an excellent foil to Wonder Woman and Steve Trevor’s relationship. It lends to some emotional scenes not only with Mister Miracle, but with Kalibak as well. The one panel with Kalibak is especially moving given what Johns had revealed about his character previously.

Aside from the Mister Miracle scene, the dialogue and narrative throughout the book was also poor, but this is mainly because he doesn’t spend enough time with the characters. The non-Green Lantern Jessica is a perfect example. I have absolutely no clue what is happening with her. It appears her Green Lantern Ring has its own conscience, but Johns doesn’t really explain it and assumes readers will already know some of her backstory. 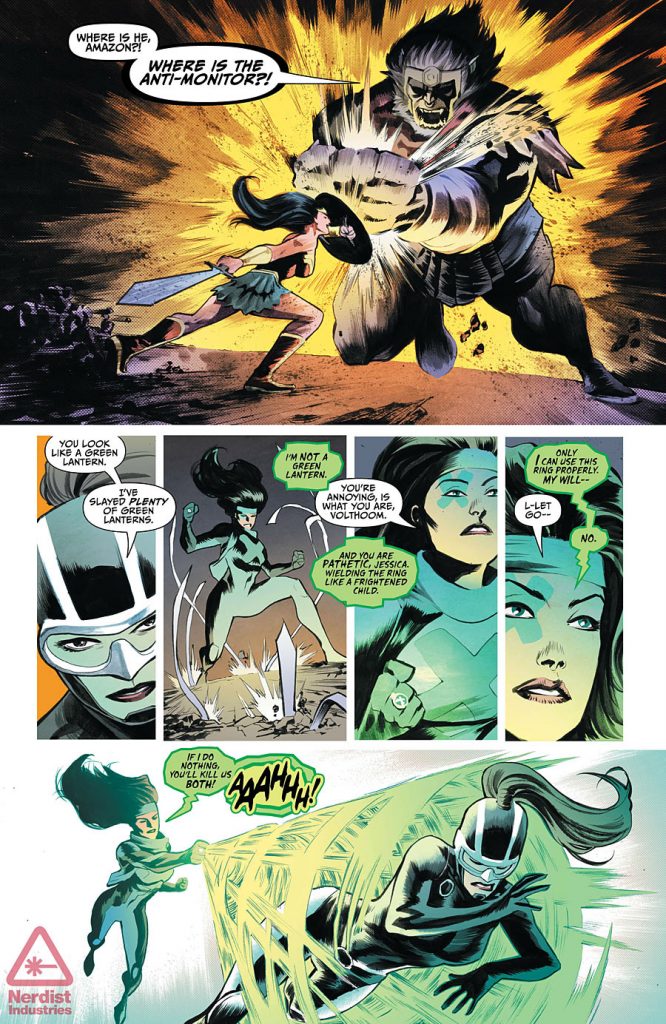 As for the artwork, it is serviceable but definitely not up to par to the first arc or even the previous issue. It doesn’t feel as epic or glorious. You can definitely see a distinct change without Brian Buccellato assisting Francis Manapul. Manapul uses a lot more shadowing on the characters’ bodies and faces. And, some of those characters look to have disproportionate figures or their appendages are in odd, uncomfortable looking positions such as heads tilted off to the side. He also uses more far away camera shots instead of ones that put you right in the action. Finally, he uses a number of panels with blank backgrounds which he fills in with solid colors.

That’s not to say there aren’t some really good panels, which there are. The aforementioned one with Kalibak was extremely moving and he did it in a unique way of showing what was tormenting Kalibak within his own head. It was a truly unique and creative panel. He also made great use of the Boom tubes, drawing out the Boom around a certain female character making it appear as an explosion.

[easyazon_link identifier=”B0189Y55MQ” locale=”US” tag=”bounintocomi-20″]Justice League #46[/easyazon_link] was a very poor outing and something I was actually shocked to read, seeing as how I have actually been enjoying the story Johns has been putting out. However, this one was riddled with mistakes from poor transitions, to spreading himself way too thin on characters, and to just plain bad dialogue and storytelling. The art also had its faults with a more subdued approach, although there were some standout pages and panels from Manapul.