World War II is in full swing and both the Axis and Allies are hard at work developing new technology that could turn the tide of war in their favor. One man finds himself stuck on the ground dreaming of soaring through the skies. How does it fare?

[easyazon_link identifier=”B0193WUA8M” locale=”US” tag=”bounintocomi-20″]The Rocketeer at War #1[/easyazon_link] is one of those number ones that focuses on introducing characters and plot points in preparation for the rest of the story arc. However, Marc Guggenheim and Dave Bullock sacrifice the flow of the story in order to introduce the characters and provide the separate plot points.

The flow of the story is very disjointed. Guggenheim and Bullock move you from one scene to the next without any pause to catch your breath. You are trying to figure out what is happening in one scene and all of a sudden you are swept to a whole new scene. This happens a number of different times throughout the issue. The disjointed flow actually hampers the actual character introduction and development because, by the time you start getting to know some of the characters, you are taken to meet new ones. However, it does show you that there is plenty of interesting things happening in this world.

While many of the characters aren’t given a lot of time to actually allow the reader to connect to them or discover who they are, they do provide plenty of time for one, Secord. We get to see his selflessness and his courage, as well as his recklessness and brash on-the-spot decision making. His character is also part of a nice little twist that new readers to Rocketeer will find surprising, although it may be a little confusing at first due to the nature of the opening scene. It took me a bit for it all to click into place. However, veterans will probably find it as a nice piece of nostalgia. 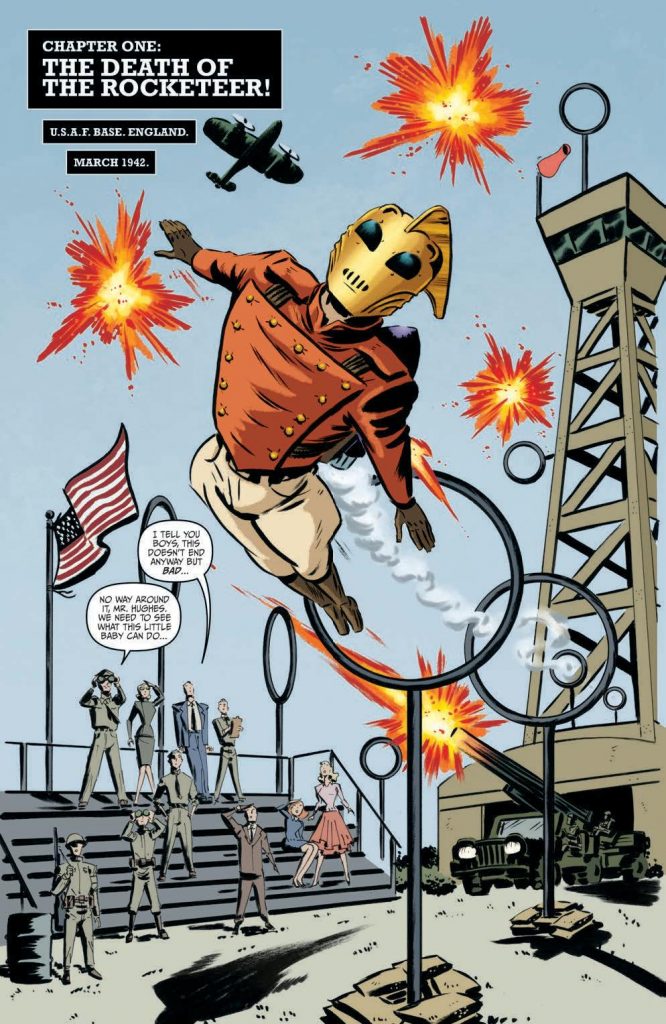 While the overall story is very disjointed, some of the individual scenes are extremely entertaining. The chase scene is one of those that lets us get to know Secord as a character, but provides plenty of action and does a great job of characterizing the Nazis as the villains that they are. Although, the entire premise of the scene is a little questionable, but that’s why we suspend our disbelief!

I’m a sucker for the type of artwork Dave Bullock uses. It captures the feel good, optimistic nature of the 1950s, but he is able to temper that optimism with some gritty and dramatic combat scenes. In order to temper the optimism, he makes good use of shadowing. There is one scene where Secord is rescuing a Royal Air Force pilot that really stands out with the shadows under Secord’s eyes and on both his and the RAF pilot’s outfits. 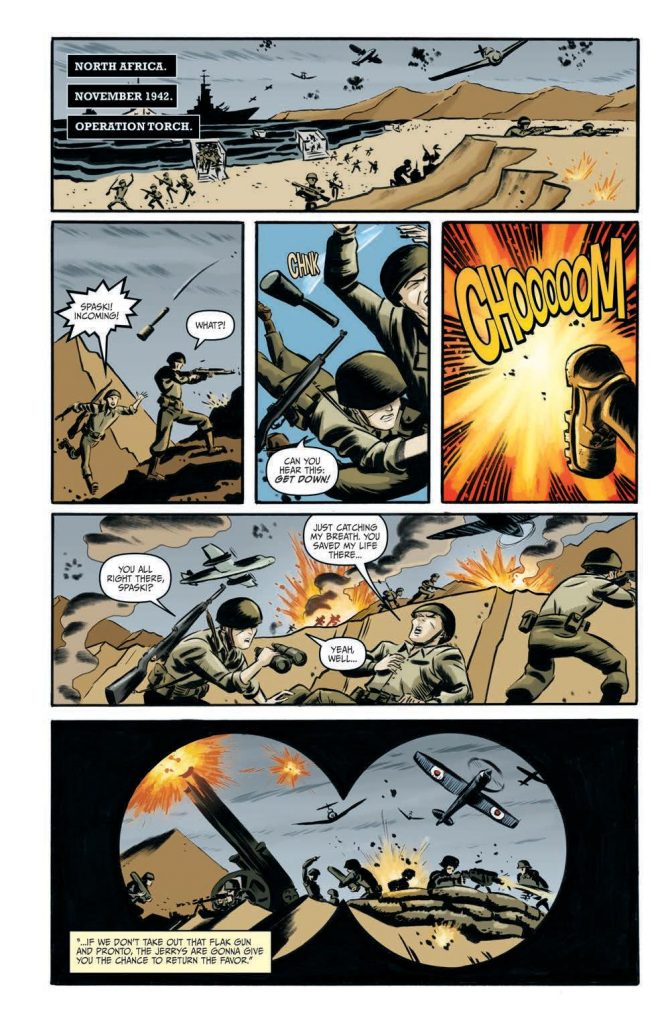 He also uses some great point of view panels where Secord is looking through binoculars. It narrows the scope of the battlefield and allows him to really provide some shock factor. There are some issues. One includes the depiction of a Nazi soldier getting lit up. He looks more like a puppet on strings than a soldier being gunned down. The opening scene was also a little difficult to follow. The dialogue did not really match the art. It appeared everything was going great, but the dialogue noted “the $#@% had just hit the fan.”

Bullock does excel by describing the attitude of the characters. One of my favorite scenes is when Secord’s military buddies are gawking over his letter from his girlfriend back home. You can see the excitement on their faces, but it’s also just a touch overdone to depict their camaraderie. You can tell they are giving him a hard time much like any group of guys does.

[easyazon_link identifier=”B0193WUA8M” locale=”US” tag=”bounintocomi-20″]The Rocketeer at War #1[/easyazon_link] introduces us to the characters, world, and the overall plot the story looks to take. However, many of the characters are not given enough time for us to really get to know them, let alone connect with them. This is because the story is very disjointed, jumping from scene to scene. However, Guggenheim and Bullock do a good job of characterizing the protagonist. I also enjoyed the book’s optimistic tone aided by Bullock’s depiction and attitude of the characters. If you are looking for a straight-forward, good vs evil World War II story, this book aims to deliver.