The Justice League struggles to come to terms with their new godly powers as they find allies in one of the most unlikely of places. Will they be able to figure out what Grail is up to and stop the Anti-Monitor? How does it fare?

[easyazon_link identifier=”B01924KQHG” locale=”US” tag=”bounintocomi-20″]Justice League #47[/easyazon_link] is vastly superior to the previous issue, but it still doesn’t attain the level of quality of the first chapter of “The Darkseid War.” Geoff Johns begins to really examine the new and potentially dangerous powers certain members of the Justice League have acquired. The opening dialogue hits this straight away, showing how insanely attached Batman has become to the Mobius Chair. He does, however, overdo the dialogue at some points, providing exposition that we don’t necessarily need because Jason Fabok’s artwork clearly depicts what Johns is writing. It is almost as if he doesn’t think we as readers will be able to figure out the Justice League has undergone some massive changes during “The Darkseid War.”

Johns finally reveals one tidbit I have been wondering about for the entire story line and that is Jessica’s power ring and the purpose it serves. It is a nasty little reveal that creates a ton of drama and adds a whole new faction to The Darkseid War aside from Darkseid and the Anti-Monitor. 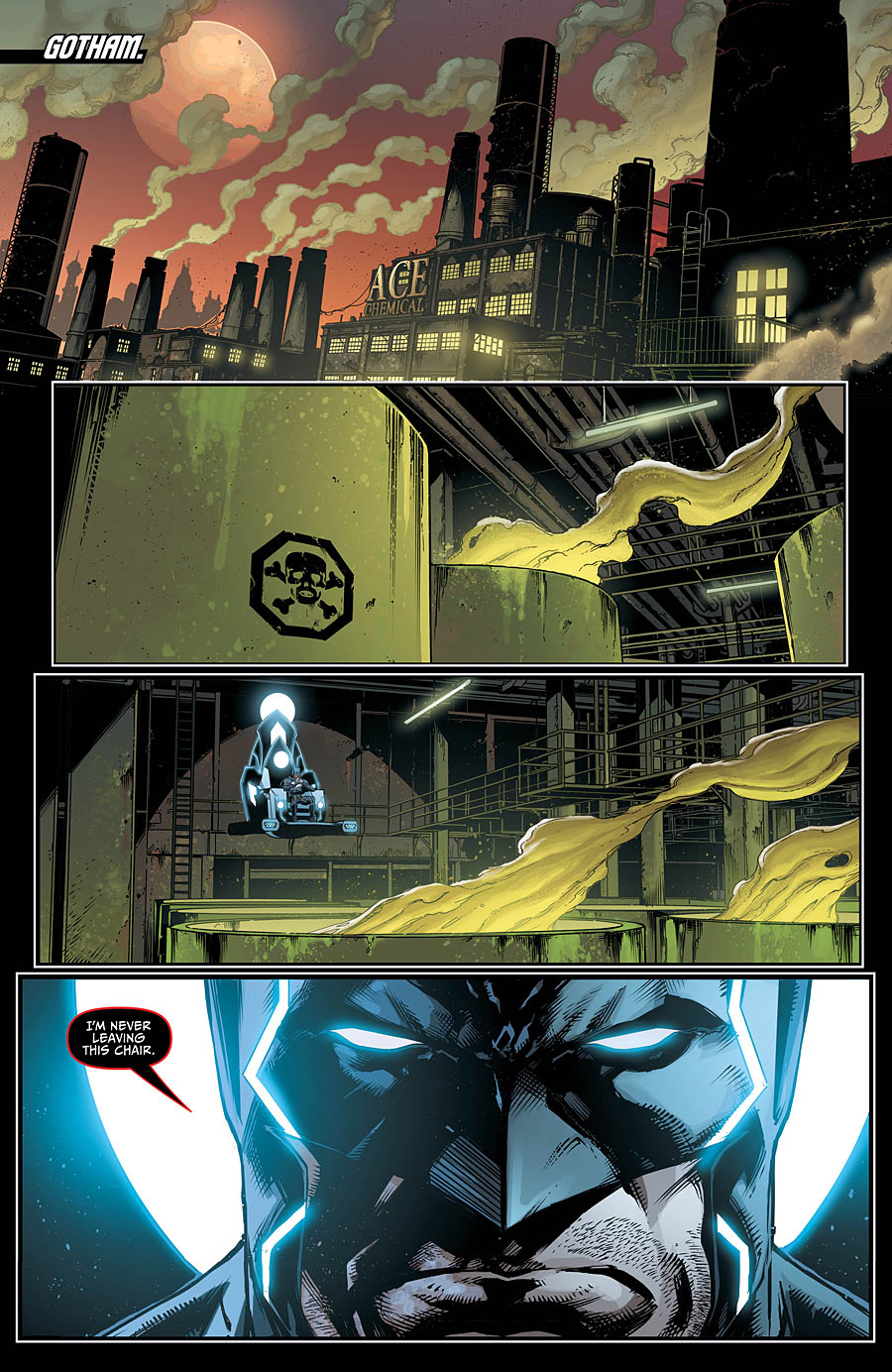 He also does an excellent job with the dialogue of Mister Miracle. The chemistry between him and his wife, Big Barda, is fantastic. They are so in sync they have done the Justice League’s job for them before they even ask about the plan.

The pacing was definitely a major improvement over the last issue. Mainly because the characters are essentially converging with each other and Johns isn’t stretched thin attempting to touch on each of the characters. He focuses on a certain set of characters and leaves others completely out of the story such as Flash and Shazam. He does make a point of continuing to give attention to Grail, hinting at her plan, but not giving anything away, although he fails to explain the emergence of Mobius. 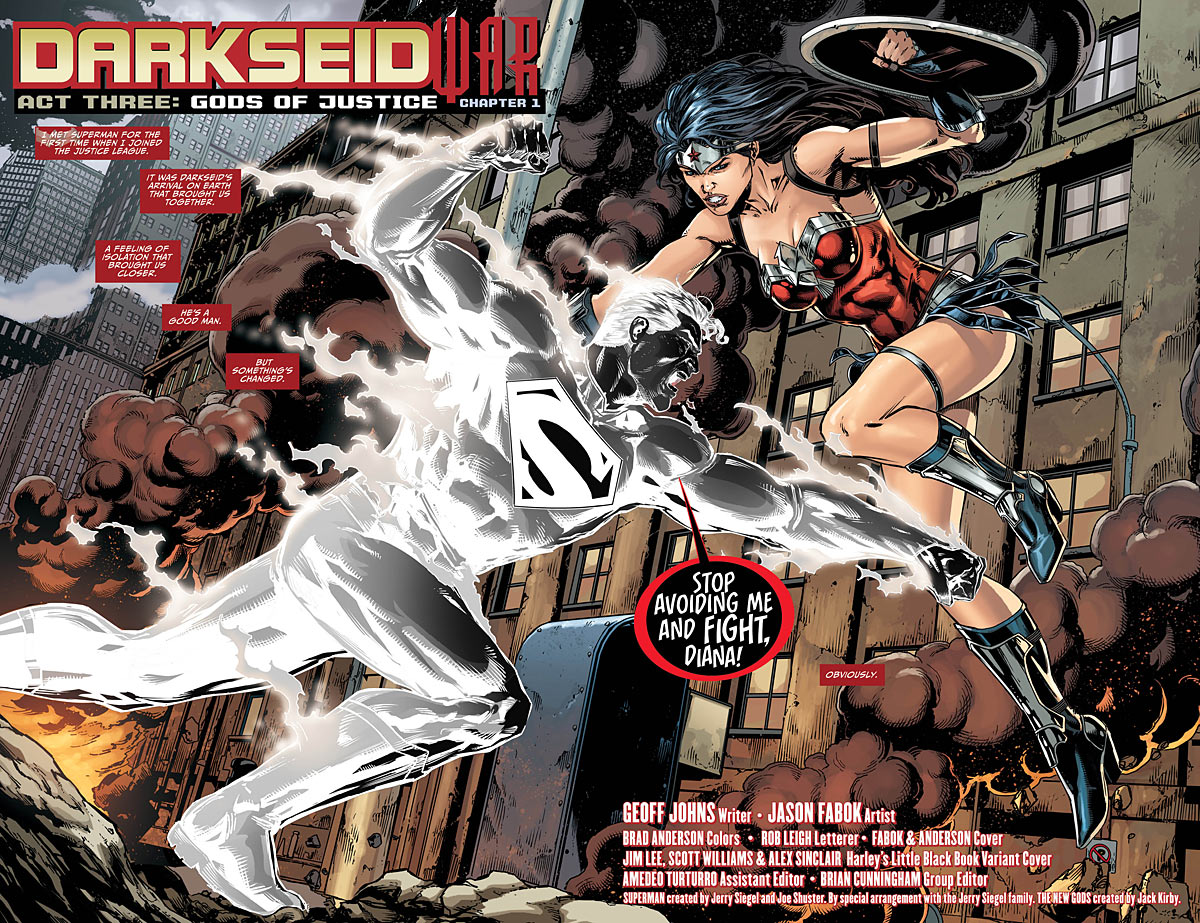 Probably the most notable difference in this issue is the return of Jason Fabok on the artwork. He was really made to do this book. The battle scenes are fantastic and I love the detail and emotion depicted on the characters, especially during a scene with Big Barda breaking through a wall charging at armed guards. He is able to use a number of different camera angles to highlight the emotional struggles of the characters. Of note is the almost reversal of how Superman and Ultraman are depicted.

One thing that really caught my eye was Rob Leigh’s letters for Superman. He uses a font that gives the words a shaking feeling, but it doesn’t feel like they are shaking with rage which would be appropriate. Instead, it feels more like a child’s temper tantrum. It was really off-putting and didn’t fit how Superman’s character had changed.

[easyazon_link identifier=”B01924KQHG” locale=”US” tag=”bounintocomi-20″]Justice League #47[/easyazon_link] is a huge improvement from the last issue. Jason Fabok returns on art duties and his presence is felt immediately. His artwork just makes the book feel epic. The pacing definitely improved with Johns telling a tighter story and not stretching himself too thin. He also answers some questions while adding in a whole new element that will have a major impact on the story. However, Johns explains every little character detail that is done better through Fabok’s artwork and the actions the characters take.