The Great Depression was a rough time; it was even rougher if you were dragon. The brutality of life and dragon training comes as a shock to young Enrico while his older brother is informed of his father’s death and his mother receives some friendly help. How does it fare?

Joe Kelly begins [easyazon_link identifier=”B019I3ZMFC” locale=”US” tag=”bounintocomi-20″]Four Eyes: Hearts of Fire #1[/easyazon_link] by setting the stage and introducing us to the world he has built. He uses a common tactic of using glowing and positive remarks on top of Max Fiumara’s artwork, depicting the harsh realities of life that contradict the pleasant writing. You feel fully immersed in the world from the first page.

Joe Kelly and Max Fiumara excel at characterization. They do an excellent job with Enrico’s brother, portraying him as a hustler, a man with a dream and a willingness to attain it no matter how hard it may be. However, he isn’t a salt of the Earth character; rather, he is more Tony Stark bravado with a dash of Paul Newman from Hustler. Fiumara captures this with the first image of him. He is decked out in a stylish suit, sitting on a desk, wheeling and dealing on the telephone.

While Kelly and Fiumara do a great job with their characterization, they really do wonders at pulling at your emotional heartstrings. Think Sarah Mclachlan’s ASPCA ads. They hit on similar points from the ASPCA ad as well with Fiumara’s artwork depicting the cruel and terrible conditions in which the dragons are kept. Fiumara also doesn’t shy away from showing the abuse of the animals. While all these might get to you, what did it for me was how Enrico reacted to seeing all of it. It was moving. 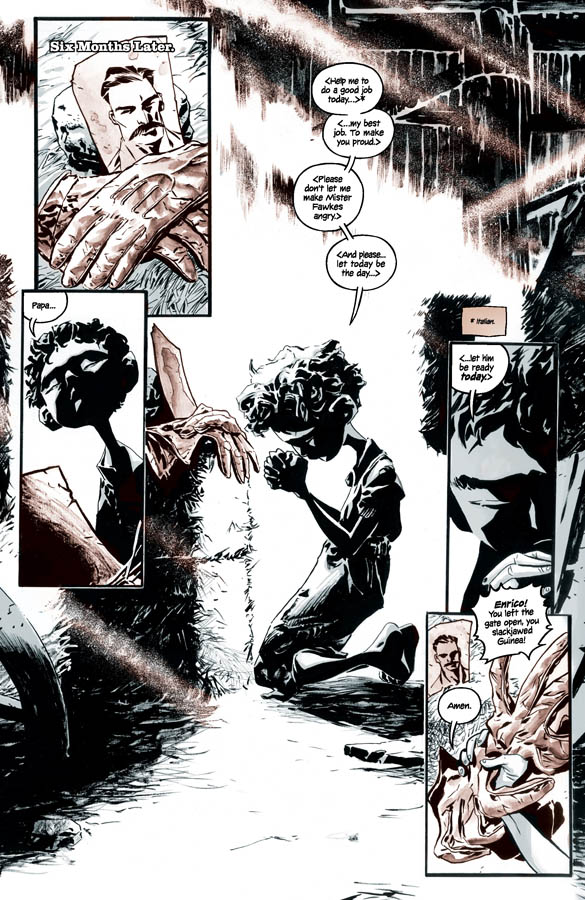 The price for the powerful, emotional moments was the pacing of the book. It slowed down quite a bit to really hit home on them. When Kelly and Fiumara weren’t pulling at your heartstrings, they were giving you a glimpse of happiness in the rough world, but even at the end of the happy scene it was clouded with foul intentions.

Both Fiumara and Kelly are on point with the tone throughout the entire book. It is depressing, which is fitting given the historical era in which the book takes place. One of the key elements to producing this tone is the black and white nature of the book. Complementing the black and white artwork were very lightly red colored sound effects by letterer Thomas Mauer that captured the dragons’ pain.

Kelly’s dialogue was top notch. I especially enjoyed the interaction between Enrico’s mother and Mister Jorge. It was light-hearted with hints of flirting that put a smile on your face. Other parts of the dialogue give you completely different reactions. At the end of the issue when we meet Boccioni, I felt repulsed and just a tad bit afraid. The dialogue was menacing and harsh. 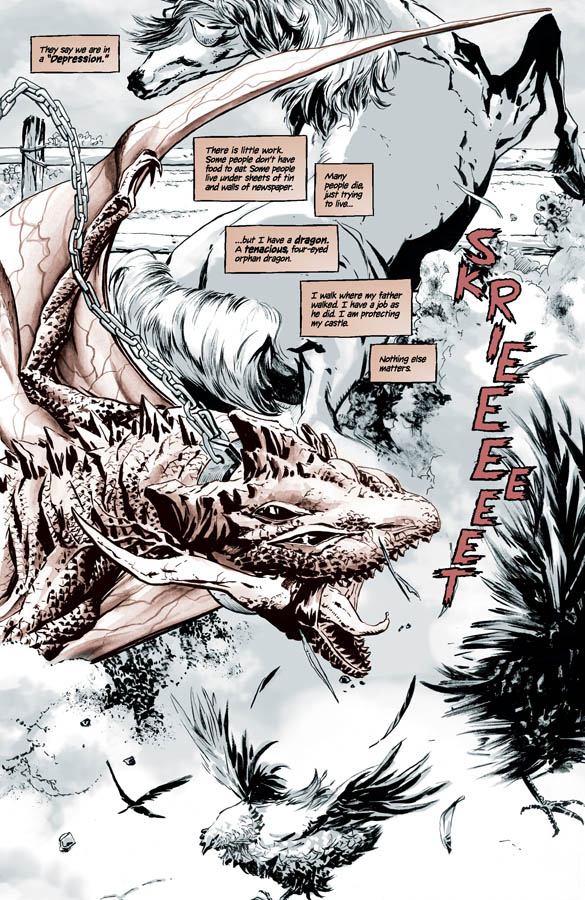 There were some difficulties with making out what certain panels were depicting. This was mainly during the dragon training. However, Fiumara also uses a brilliant layout during the same sequence to depict a tear falling down from Enrico’s left eye. He uses the full page to draw Enrico’s head, but laid over top of the left side of his face are six panels moving vertically down the page to suggest a tear falling down. It just hits you!

[easyazon_link identifier=”B019I3ZMFC” locale=”US” tag=”bounintocomi-20″]Four Eyes: Hearts of Fire #1[/easyazon_link] is a powerful and emotionally moving story that reintroduces or introduces you for the first time to this dark, dangerous, and violent Great Depression era world. Fiumara and Kelly have excellent chemistry, capturing the identity of their characters in the way they talk and carry themselves. The only downside is the pacing of the book which was a little slow, but in so doing, Kelly and Fiumara were able to give us some extremely powerful emotional scenes. I definitely suggest you pick this book up, you won’t regret it!