A mysterious foe has all but conquered the known universe. In order to save what little is left of the universe, Ganthet, one of the Guardians of Oa, invokes the Last Light sending lantern rings and all surviving lanterns into an alternate dimension. An alternate dimension that just so happens to be occupied by Captain Kirk and the crew of the USS Enterprise. How does it fare? 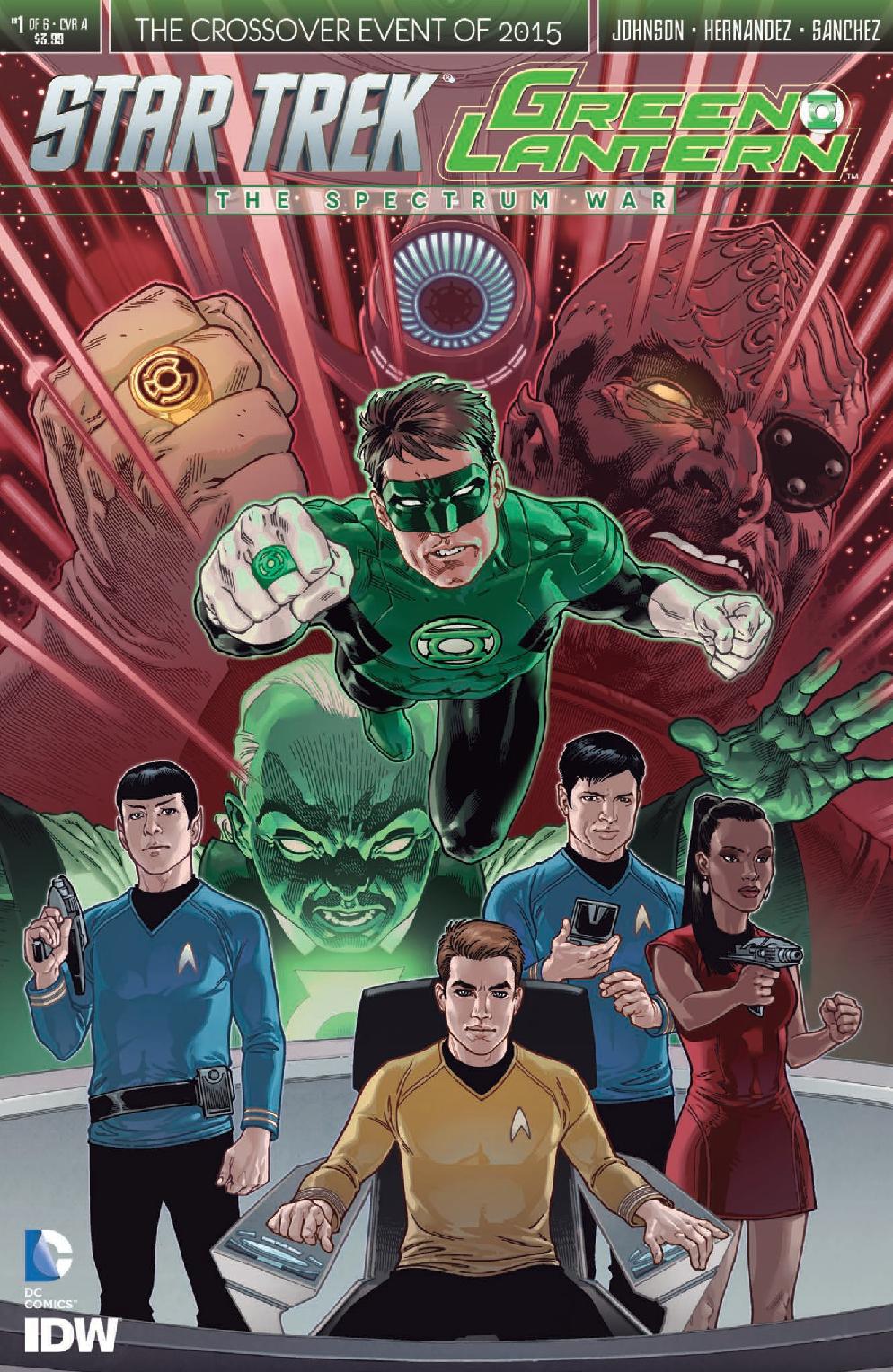 [easyazon_link identifier=”1631405594″ locale=”US” tag=”bounintocomi-20″]Star Trek/Green Lantern: The Spectrum War[/easyazon_link] is an absolutely fun read and a fantastic crossover event. Writer Mike Johnson and artist Angel Hernandez wonderfully pace the book, building up the tension when revealing certain characters and the overall villain. They also make these reveals significant. They usually elicited an, “Oh crap!” reaction as I was reading. However, some of the characters’ arrivals may feel a little too convenient, arriving just in the nick of time.

As far as the actual characters, Mike Johnson does a fantastic job of characterizing them. However, he relies a little too much on his audience’s knowledge of the USS Enterprise’s crew. He spends a significant amount of time detailing three of the villains and why their certain rings chose them. You understand their motivations, their frustrations, and just how dangerous and evil they can be through the horrific actions they take. 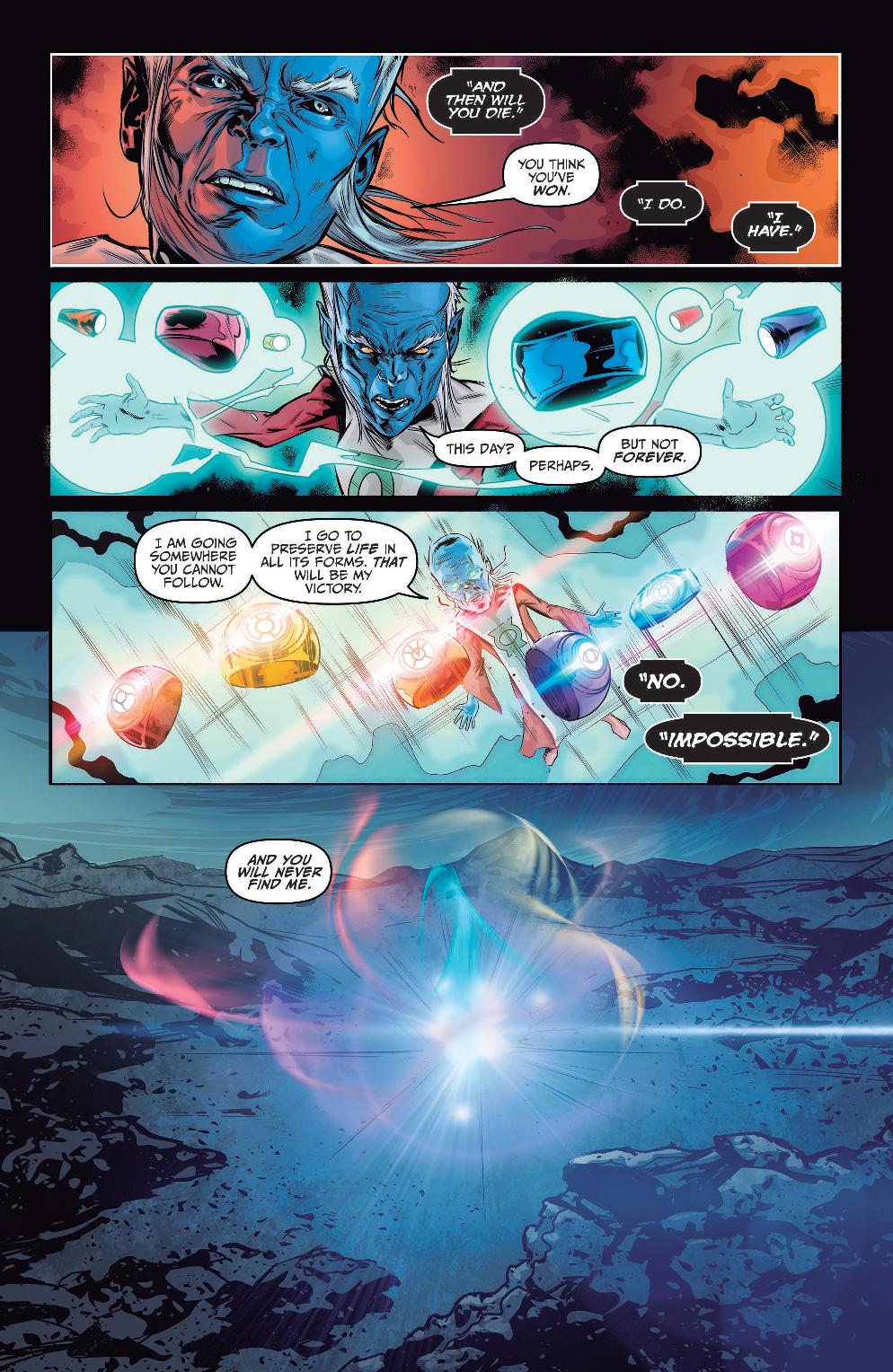 The story also takes place within the new Star Trek movie universe and Mike Johnson does an excellent job of using the plot elements from the 2009 Star Trek movie and incorporating them into this story line. He also turns it into a key character defining moment and shows the relationship the crew of the USS Enterprise has formed with the newcomers. There is even an iconic moment somewhat similar to Thor’s hammer scene from Avengers: Age of Ultron, except it was done with the Captain’s Chair. There are some plot points that Johnson brings up that you think may play a bigger role or he had at least planned for them to play a bigger role, but they are eventually cast to the wayside and discarded. It is unfortunate because some of them would have put even more tension on the alliance, making their situation even more dire.

The dialogue is top notch. Every time one of the Star Trek characters spoke I could hear the actor’s voice in my head. I really loved Chekov’s dialogue and how his Russian accent was captured. I also can’t reiterate enough how Johnson’s dialogue reflects the core of these characters. He really knows who they are and how they would interact in certain situations, which is brilliantly demonstrated with the interaction between Kirk and Spock.

Angel Hernandez’s artwork is solid. He is able to capture the likeness of the Star Trek actors for the most part, although there are certain scenes where their faces are a little distorted or their body proportions seem drastically different than other scenes. He really excels with the battle scenes out in space or out in the open on a planet. His large one-page splash pages revealing certain characters are absolutely gorgeous to look at and really hit home the significance of their arrival. More imporantly, his space battles are what are exceptional. He captures the chaotic nature of the battles with blasts of energy coming from everywhere all with a gorgeous space background with star clusters and massive planets as a backdrop. 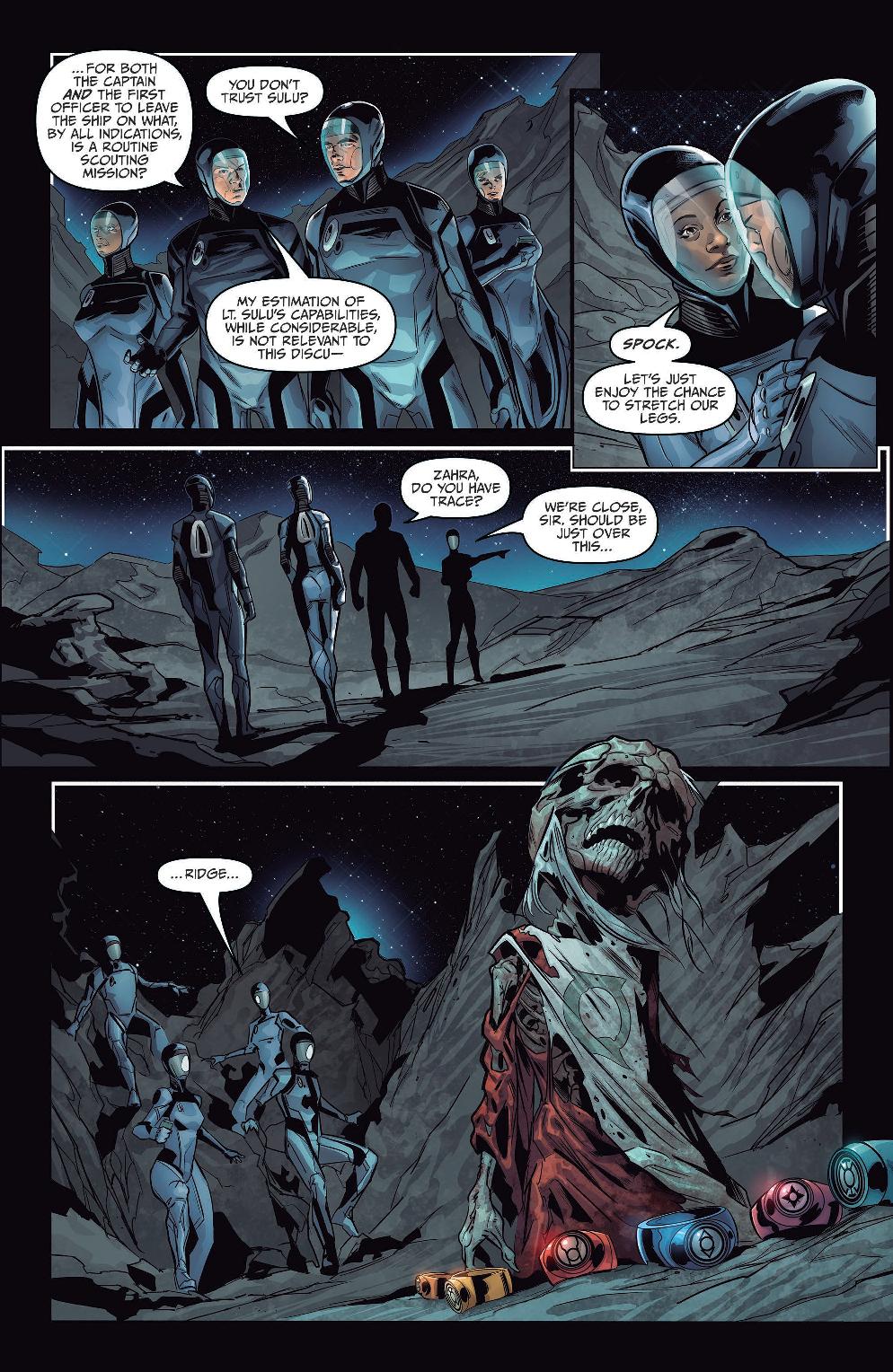 Alejandro Sanchez’s colors do a great job of depicting the mood of the story. When a certain character is introduced, the book is much darker using a lot of shadows to demonstrate the nature of his ring. In contrast, the entrance of another character is much brighter and his use of lighting gives him an almost saintly appearance.

[easyazon_link identifier=”1631405594″ locale=”US” tag=”bounintocomi-20″]Star Trek/Green Lantern: The Spectrum War[/easyazon_link] is a wonderful read. It captures what is great about both of the series and captures the personalities, relationships, and actions of all of the characters perfectly. The overall story is well-paced with plenty of twists and surprises to keep you on your toes. The artwork for the most part is solid, although there are certain panels where the Star Trek characters have odd proportions or their faces look a little smooshed in. This is a great story that you will definitely want to pick up!