Dejah Thoris, the Princess of Barsoom, sets off on a path of self-discovery that takes her away from her love, John Carter, and her beloved city of Helium as Councilman Valoris makes a political power grab. How does it fare?

Writer Frank J. Barbiere and artist Francesco Manna begin [easyazon_link identifier=”B01BCI21OQ” locale=”US” tag=”bounintocomi-20″]Dejah Thoris #1[/easyazon_link] with the titular character assuming a new name, talking about how far she has fallen, while depicting a scrappy warrior undergoing training. Barbiere and Manna then transition to show us the how and why she has fallen and ended up in this training ground which takes up the rest of the issue.

Barbiere and Manna do an excellent job of showing just how well Dejah Thoris has it. The second sequence combines dialogue describing the beauty of Helium to actual depictions of a leisurely stroll through a garden. It also has a bright, cheery attitude courtesy of Morgan Hickman’s use of light and his bright colors.In addition, the transition to a much darker color palette and scenes taking place in the dark of night highlights how quickly Dejah Thoris’ fall from grace is. You can see the darkness descending upon her. However, it isn’t just external darkness assailing her. She also is assailed from the inside once the villain reveals damning evidence about her history.

While the visual references to Dejah’s downfall are very well done, the actual cause of the downfall felt a little too contrived and it also makes John Carter and Dejah look like complete buffoons because of their lack of political knowledge and power. Dejah, by Barbiere’s own words, is supposed to be the Princess in training to ascend the throne. She should be knowledgeable about how the kingdom is handled and who the actual people within the kingdom’s political apparatus are. Instead, she is absolutely clueless. She doesn’t even know the name of the councilman. To make matters worse, she puts complete trust in this stranger. 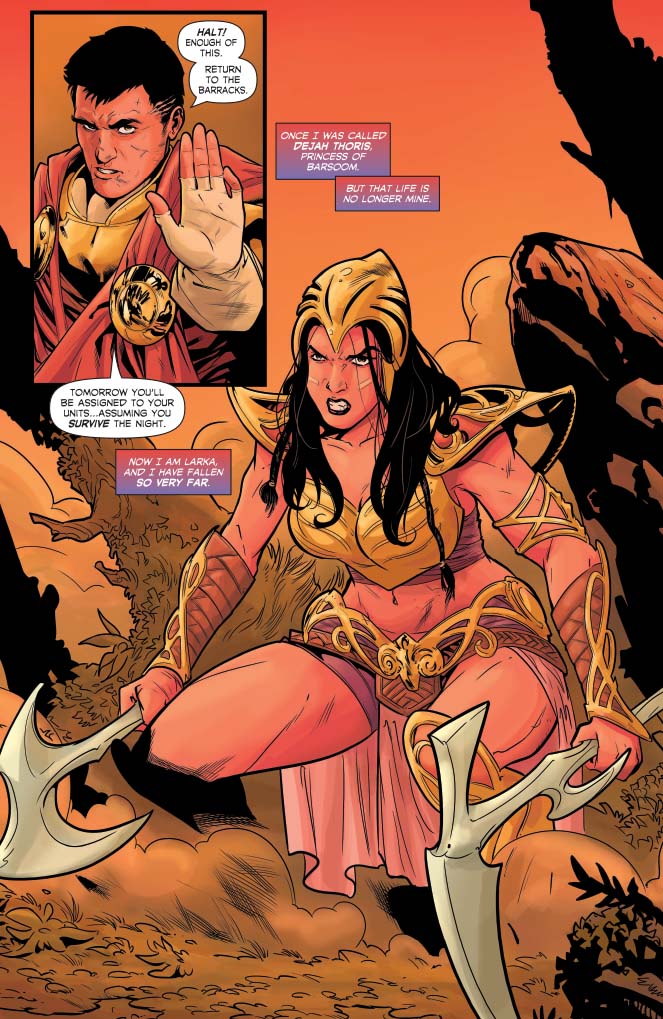 The betrayal is probably the worst part because Barbiere completely incapacitates John Carter. He just stands aside and takes orders. I understand he needs to minimize John Carter’s influence on the story because it is dedicated to Dejah Thoris, but the way Barbiere explains it in the dialogue just doesn’t cut it. He stands down based on this explanation, “All in due time, son.” They are arresting your love based on nothing and you are just going to let them do it?

Aside from this main story point, Barbiere does a good job of showing the internal struggle boiling up within Dejah. I also like how he uses her handmaid. Additionally, the ending sequence of the story is well done.

The artwork for the most part is solid. There is one point that is majorly flawed. It is during an action sequence. Manna depicts a man holding a knife above his head ready to strike, but in the next panel all of a sudden that character has decided to bring the knife back down to his hip, no longer in an attacking position. It doesn’t really make sense and throws off the believability of the scene. 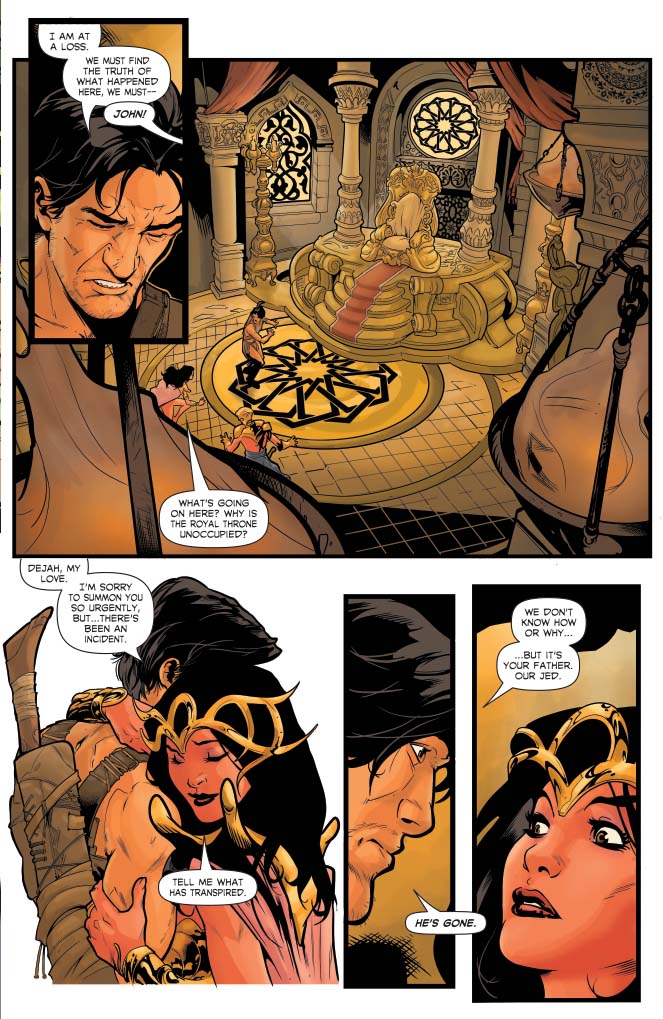 There were also some issues with panel flow. Some of the panels bled over into others and it was difficult to tell where your eyes should be going in order to follow the dialogue. It forced you to have to re-read a number of times.

Manna did do a good job of providing a ton of different camera angles, presenting different looks at the scene. The different locations within Helium really stood out whether it was deep in the dungeons, outside in an open garden, the sweeping hallways of the throne room, or a large room filled with councilmen. He gives us plenty to explore within Helium.

[easyazon_link identifier=”B01BCI21OQ” locale=”US” tag=”bounintocomi-20″]Dejah Thoris #1[/easyazon_link] struggled with its characters fitting into the story. They seemed almost powerless despite their real positions of strength. It makes the story feel contrived in order to get Dejah Thoris from one point to another. The art also had some major problems especially during a prominent action sequence. The coloring and how the tone changed was definitely a highlight and the use of different locales within Helium was a positive. However, the contrived story at this point makes Dejah Thoris #1 a book you can skip.