The clash between the Aliens and Vampirella comes to a close. Will either side be able to claim victory? How does it fare?

Aliens / Vampirella #6 moves at a torrid pace. There are a number of plot turns and twists from start to finish. Writer Corinna Bechko also has the characters make tough life or death decisions. Interestingly enough, Bechko also reveals the final sequence of the book. However, it doesn’t spoil or take away the journey of achieving the goal. The plan still has to be executed and that’s the fun part.

The dialogue between the characters is top notch. There is a lot of tension and the different characters have different ideas, whether they are in the ship orbiting the planet or on the ground still trying to figure out what has happened. The first scene exemplifies this dialogue as not only does it show how a character transitions from being emotionally distraught and almost broken to one that is determined and resolute. It’s just a great sequence depicting how quickly one can gather their wits when events call for it.

If you thought Bechko’s dialogue couldn’t get any better, she provides an excellent three-way dialogue that builds up a ton of suspense as the characters edge ever closer to a violent outbreak. The dialogue fully consumes you that you almost forget about the most prominent character in the book. It’s an excellent job of creating horror and completely shocking you. 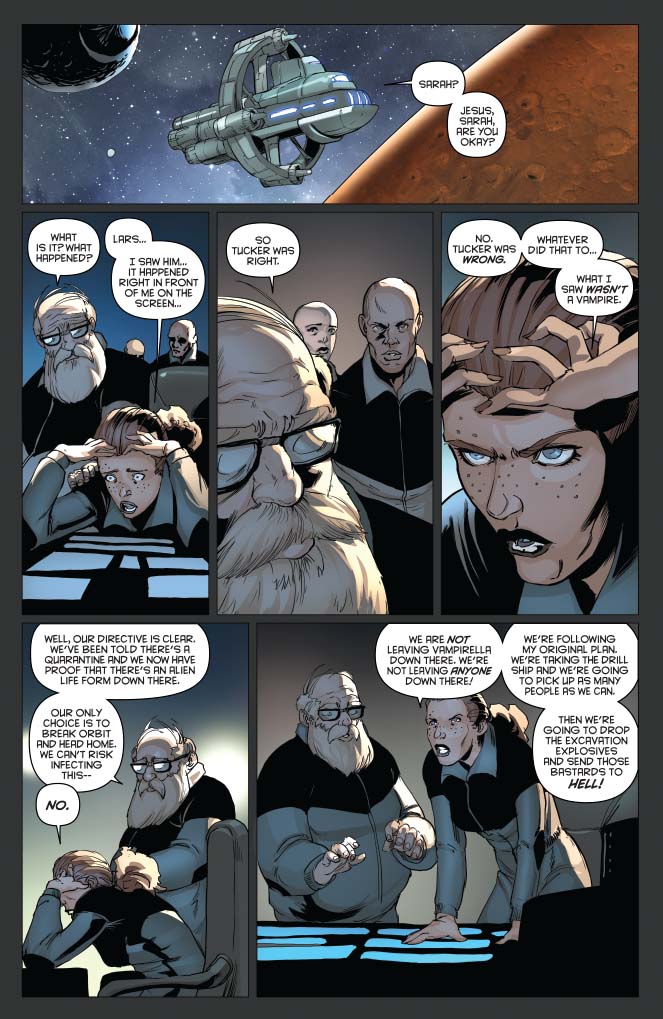 There are some issues. Bechko goes out of her way to send Vampirella and the survivors across the station; however, nothing really happens during this journey. They end up arriving at their destination within the next two pages. The line of dialogue loses its effect based on the actual panel depictions.

Javier Garcia-Miranda’s art also struggled. He gives Vampirella odd facial expressions. In the first image we see of her, her mouth looks like it is melting down her face. There are also some continuity issues. In certain panels Vampirella is holding a high powered rifle with a very large clip, then, all of a sudden, she is holding a pump-action shotgun.

For the most part, Garcia-Miranda’s art seems a little rushed. It doesn’t seem well-defined in many panels and lacks the detail he applies in other panels. Yet, some of the panels, where it appears he takes his time, are really well done. He evokes the seriousness of the situation by adding shadows on characters’ faces and adding small details such as a creased forehead. 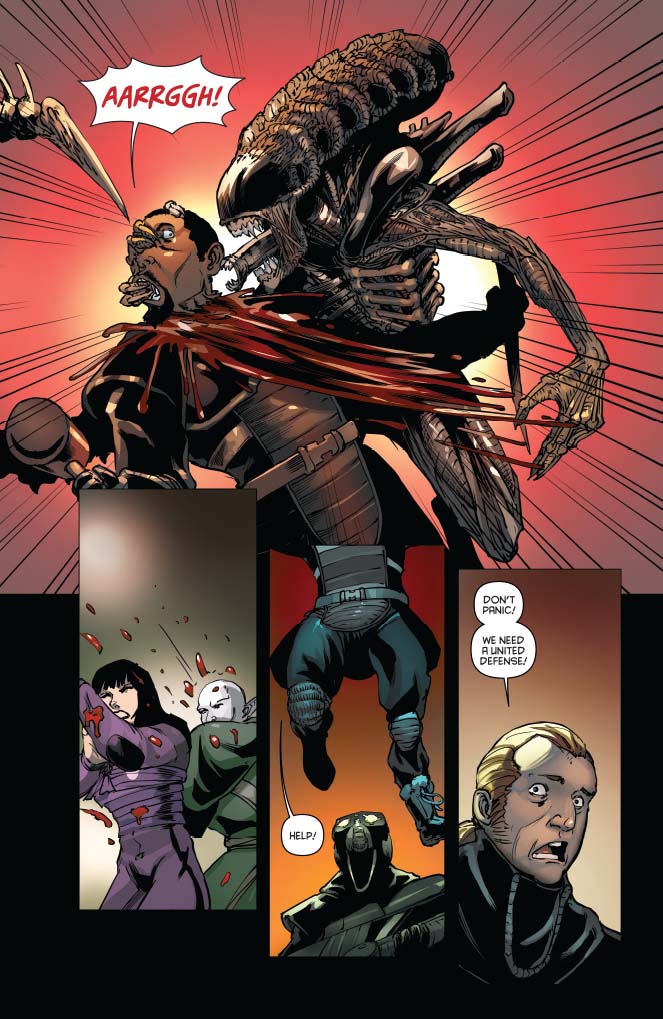 One thing is for sure, Garcia-Miranda excels with the large shock panels. They are gruesome and violent. He does try and be creative with some of these panels, but it is off just a bit. For example he tries to combine a larger panel with a smaller one below it. It ends up just looking off and a bit distracting from the actual brutality of the top panel.

Aliens / Vampirella #6 concludes the mini-series in excellent fashion. There is plenty of horror, suspense, and action. Not to mention, for the most part, some great dialogue. The artwork was the biggest setback, although it does a great job of conveying the action; the reader is able to follow the story without the dialogue. It just lacked polish and detail in many panels. If you are looking to fill your horror itch, go pick up this book. You won’t be disappointed.