Cinder and Blacktooth continue their quest to complete the spell granting Cinder the ability to use magic as they face new dangers and discover more about the history of their world. How does it fare?

[easyazon_link identifier=”B01BCYTLQ6″ locale=”US” tag=”bounintocomi-20″]Gutter Magic #2[/easyazon_link] continues to provide an interesting story, expanding on the world, and introducing new and dangerous characters. This second issue starts off with a tense action scene as Cinder and Blacktooth are cornered by Shiver and her gang. Rich Douek’s dialogue is pretty solid and at times a little lighthearted. He even pokes fun at the showdown between Shiver and Cinder in his exposition referencing high noon despite previously informing us it is 10:25 a.m. There are some unnecessary moments. For example, he decides to use Blacktooth to provide exposition regarding the shop owner, Foulroot. He tries to convey Foulroot’s response through Blacktooth instead of just through Foulroot. He fills up three panels where he only really needed one. It also diminishes the emotion of the scene. Foulroot’s righteous anger is lost in Blacktooth’s nonchalant attitude.

Douek’s dialogue continues to struggle in the second scene. The conversation between Blacktooth and Cinder feels childish as they argue about Cinder’s goal of becoming a wizard. It seems out of character for Blacktooth to even make these comments given he’s been helping Cinder acquire the materials and components for the spell on a number of missions already. Blacktooth also asks an odd question concerning how a character is still alive who lived during a war a hundred years ago. This question appears completely out of place, mainly because the first scene provides a clear enough example of how they could still be alive. 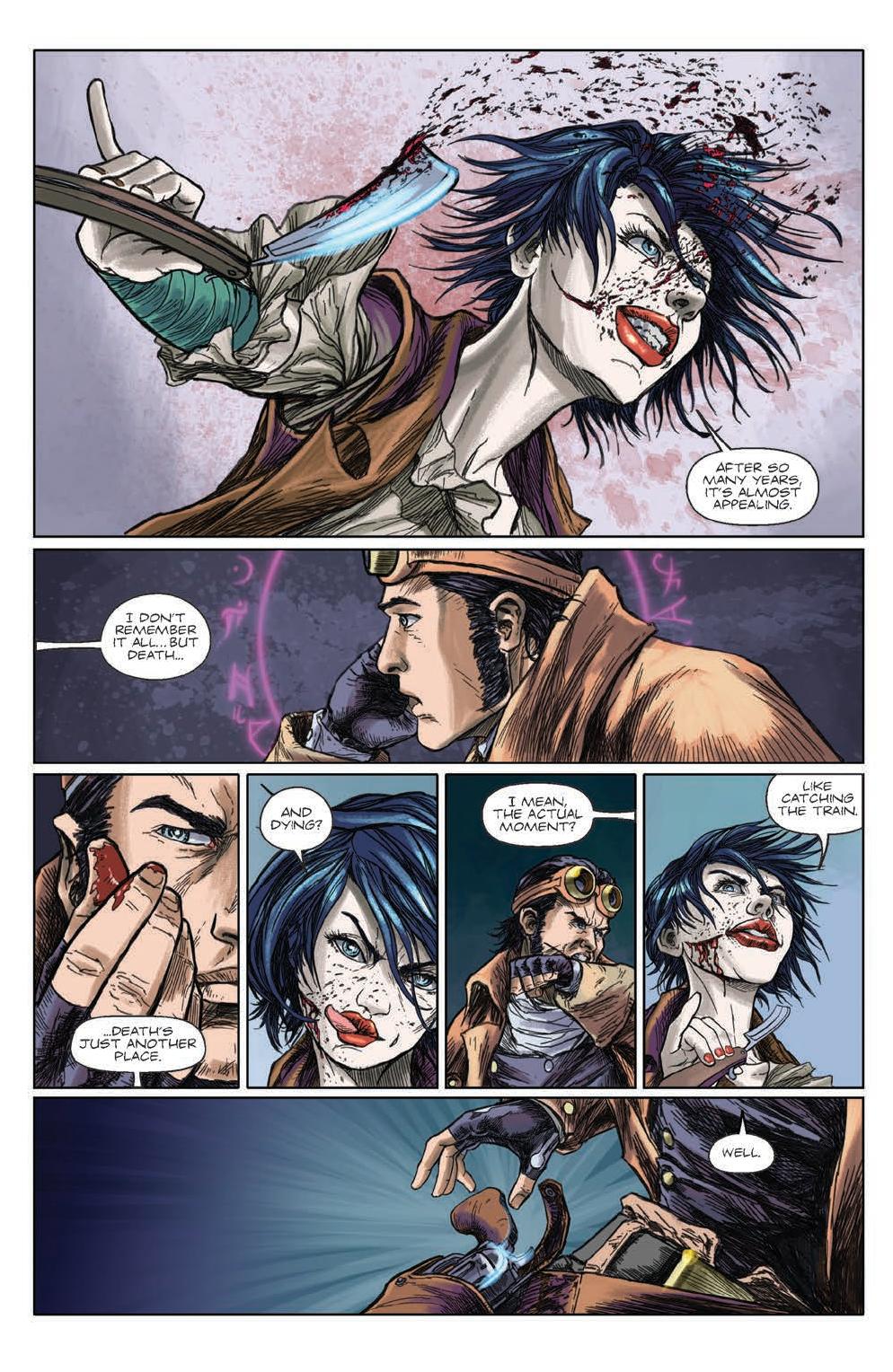 The dialogue does improve halfway through the book. There is a great scene between Cinder and a door guard as they quip back and forth. The best pieces of dialogue come when Douek introduces The Morgue. He does a fantastic job of characterizing her with short and to-the-point sentences, although it does falter about halfway through her introduction. Douek injects a seemingly random question into the dialogue to drive it forward. It doesn’t really fit into the beginning of the conversation at all.

The world building Douek and artist Brett Barkley do in this issue is expansive. It actually creates more questions than answers. They introduce a soul collector who can communicate with the dead, but how he does so is never touched on. The same can be said with Shiver’s abilities. They are seen, but not explained.

The art for the most part was serviceable. Some of the characters take on drastically different shapes in different panels. This occurs with Blacktooth a number of times. It can be difficult to tell if it’s Blacktooth or another goblin. The new characters have unique designs. I really enjoyed the Whisperer’s design with his stitched mouth, slicked back hair, steampunk goggles, and three-piece suit. 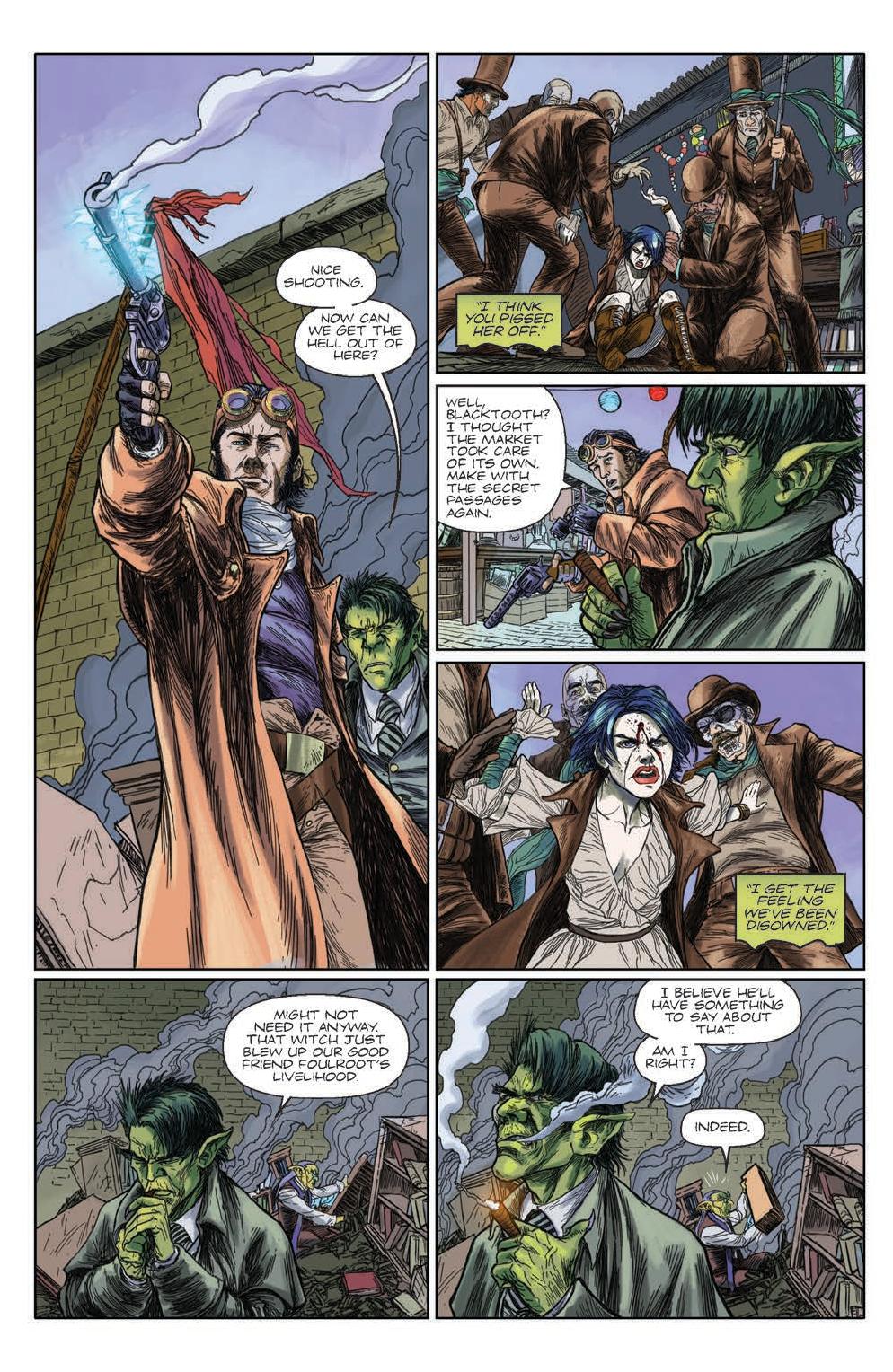 Barkley also struggled with sweeping landscape shots. The scenes in the Goblin Market felt devoid of life. He used silhouettes in the background; yet, where the action was taking place, the only characters present were the ones involved in the action. You don’t see characters running from the scene or gathering around to gawk.

The panel flow was solid. You are able to easily determine which panel to move to next. In addition, Barkley provides different camera angle or is able to show a similar angle, but with the character having a different emotion.

[easyazon_link identifier=”B01BCYTLQ6″ locale=”US” tag=”bounintocomi-20″]Gutter Magic #2[/easyazon_link] struggled with the dialogue and artwork, but it did expand the world and keep your interest piqued with the overall story. It had plenty of action, good drama, dark magic, and some fun humor. It’s not the most well-polished story, but it is a fun and intriguing story.