Family histories can often be shrouded in mystery or ambiguity. In the case of Ashley and Tyler, they just found out that their parents’ are the former rulers of Avalon, a magical realm which is now in turmoil, forcing their family back into the fold. In this introductory double sized issue, Peter Hogan introduces us to a magical universe clashing with our own, in a story that is fun, humorous, and overall enjoyable.

[easyazon_link identifier=”B01AYJXMDS” locale=”US” tag=”bounintocomi-20″]King’s Road #1[/easyazon_link] begins in medias res, with a suburban house being attacked by a Fellcat (an evil magical beast), and two men (and a golden retriever) bursting in to kill it. This sets in motion the story of the family in the house, whose father we find out was the king of Avalon, a kingdom he once ruled. With the ruling powers being overthrown by a new army of evil creatures (led by an evil sorceress), the king must reclaim his thrown and defeat this threat. What really makes this story interesting though is that the kids in the house, Ashley and Tyler, have never been informed of their family lineage, giving the reader an entry point into this world, as we know as little about this magical world as they do.

For this issue, it’s mainly divided into “the kids” and “the adults” (or alternatively thought of as those who are and aren’t aware of Avalon). I appreciate that Ashley spends great lengths of the story resenting her parents for withholding this world to her. While we don’t know much about her personal background, she refuses to be stuck in the role of a kid who goes casually with this extreme amount of upheaval in her life. This creates a vague sense of authenticity that leaves me curious to see where she will go from this angsty reaction. 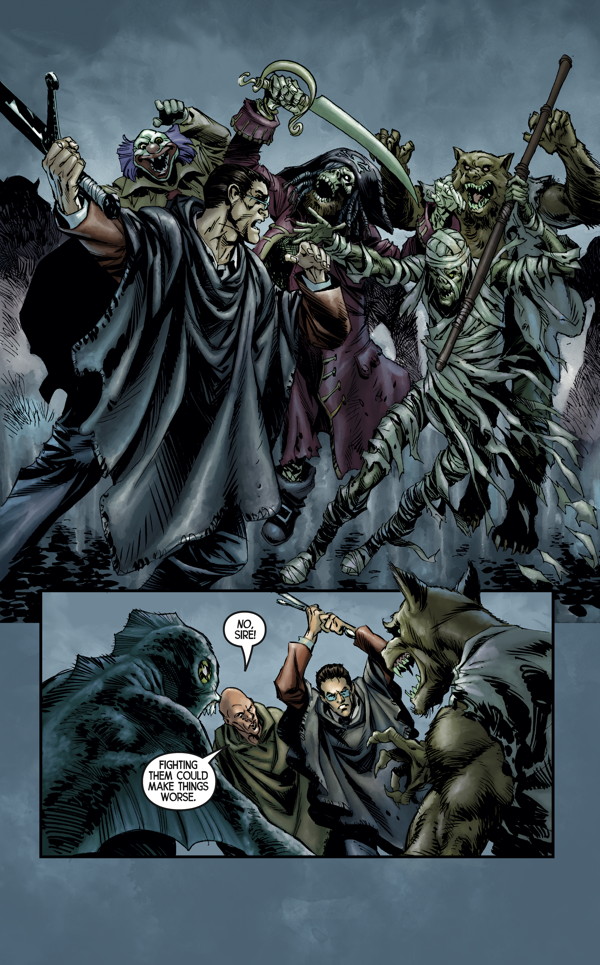 As is often the case with the beginning of a story, Kings Road can sometimes be heavy on exposition. This is not necessarily a negative trait, but it doesn’t allow much room for the establishment of particularly interesting character traits. The dialogue feels very natural and smooth, but with so much going on in this (albeit large sized) issue, character development seems somewhat moot when a vast story is being put in motion in such a short period of time.

Artists Phil Winslade and Staz Johnson use a fairly straight forward style, leaving little ambiguity for the reader. There are a number of fantastic splash pages that show huge armies and battles, with every soldier on the page being clearly depicted, rather than just blurring them in the background with generic tough-guy faces. Also worth noting is the pretty interesting panel lay outs. While they are nothing groundbreaking, it was cool to see how they would put small panels on what otherwise would have been a splash, bringing together the narrators and the narrative.

Overall [easyazon_link identifier=”B01AYJXMDS” locale=”US” tag=”bounintocomi-20″]King’s Road #1[/easyazon_link] was a very solid kick off to a promising series. While not breaking any new ground in terms of storytelling or art, Kings Road has a memorable sense of humor and wit, and can be enjoyed by comic readers young and old.