Clark Kent has arrived in Metropolis. He takes on his first gig with the Daily Planet which brings him into contact with Lex Luthor, Batman, and Lois Lane. How does it fare?

Writer Max Landis and artist Jae Lee open [easyazon_link identifier=”B01BFO23K4″ locale=”US” tag=”bounintocomi-20″]Superman: American Alien #4[/easyazon_link] up by connecting you with Clark right away, making Clark feel like a normal human being. He does this through a simple phone conversation with his mom and the theft of his vehicle; although, Clark’s reaction to the theft of his vehicle is more comical than one would expect. This opening sequence sets the tone for the book, keeping it light and cheery.

Landis and Lee keep the action to a minimum. In fact, there is only one fight sequence in the entire issue which takes place at the very end. Instead, Landis focuses on Clark Kent the reporter. By using Clark as a reporter, Landis is able to really delve deep into the characters he is interviewing. This setup might not sit well with some readers who are looking for a more action-packed issue.

We get to see a much more mature Oliver Queen who has returned from Starfish Island, but more importantly, we get to see Clark’s first encounter with Lex Luthor. Landis captures the essence of Luthor as a powerful self-driven man determined to rise above and change the course of humanity. His confidence and ego are on full display. 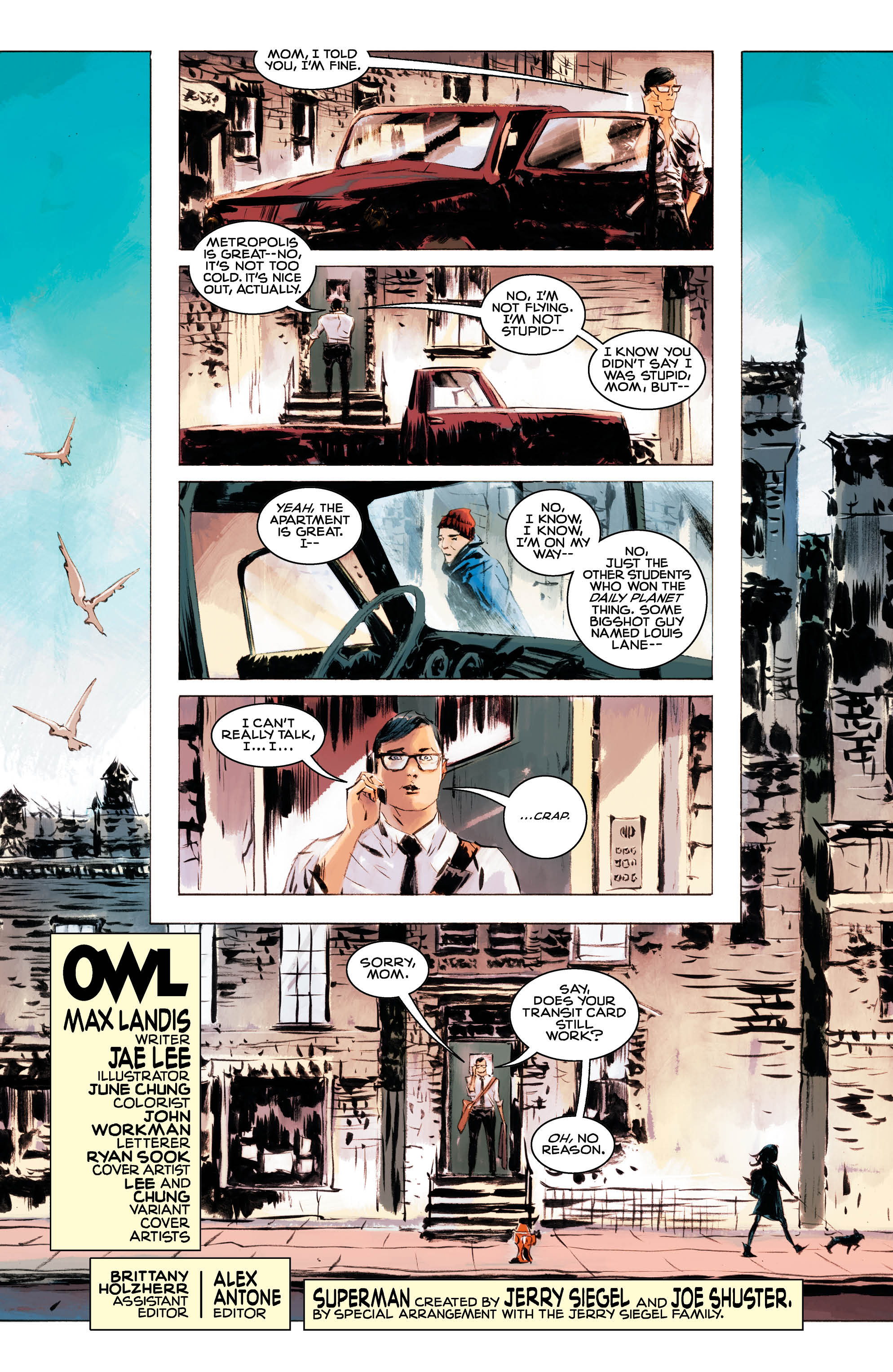 The story flows well moving from interview to interview with even some characters you wouldn’t expect to see in a Superman tale ending up on Clark Kent’s tape recorder. The book really shines when exploring these different characters through Landis’ dialogue. Not only does he explore the characters, he makes a concerted effort to explore the theme of optimism. It really stands out as he explores the theme through a number of different angles. He really makes you think about the roles of Luthor, Superman, and Batman as well as what they each represent to us as readers.

Jae Lee’s artwork is solid. He captures the fun-loving nature of the young Clark Kent. There is one panel where he depicts Clark celebrating the success of his day through a fun, spontaneous dance. It’s contagious and you find yourself singing along with him.

The one and only action sequence is dramatic and Lee makes it so through his attention to detail. He begins the sequence by making you feel comfortable, depicting a number of everyday actions such as waiting for the subway and then riding on it. By the end of the six-panel page, he hints at the violence, building up your anticipation and you are not disappointed as the next panel captures the violence of the moment with glass shattering and keyboard keys flying. 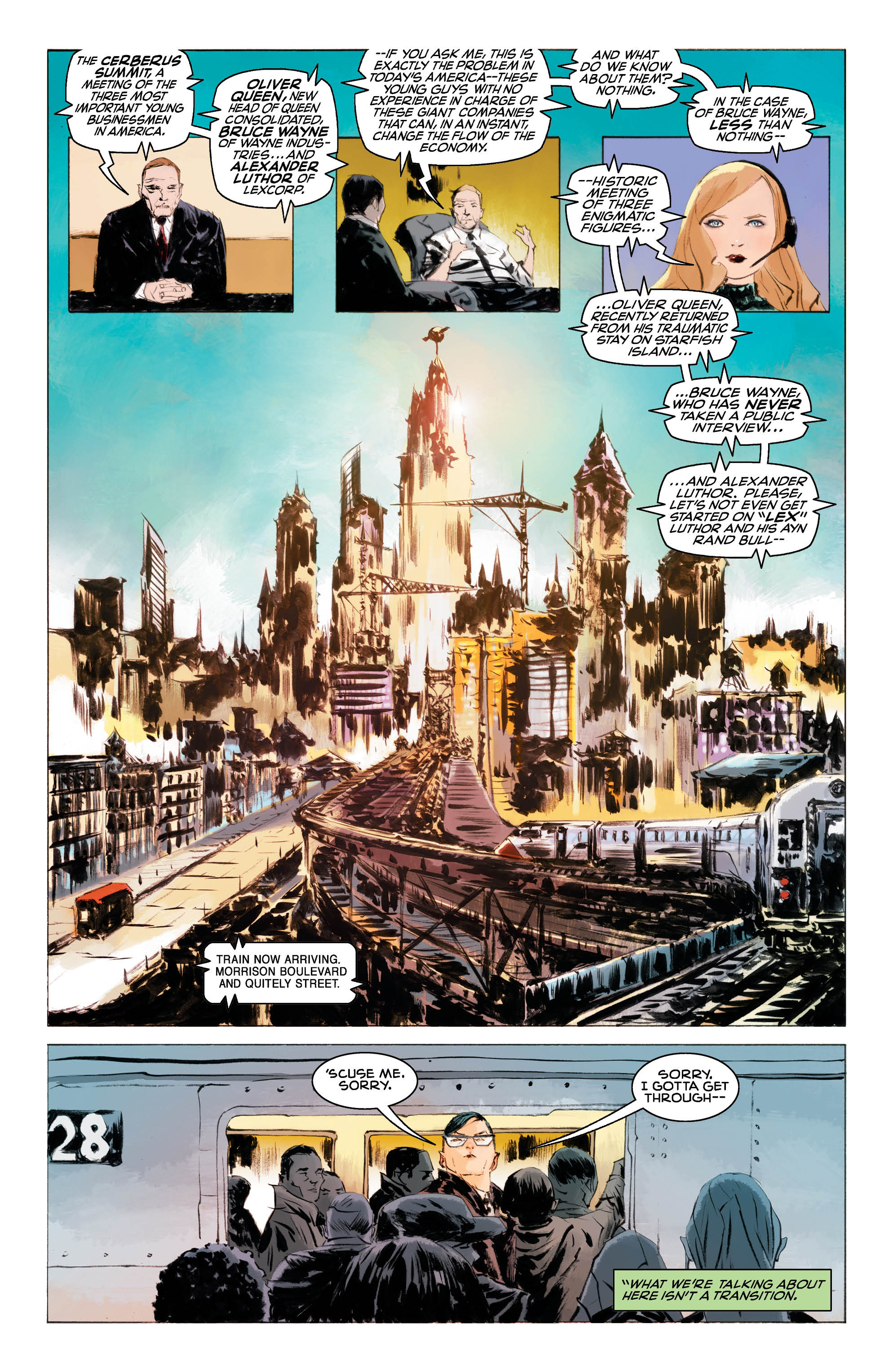 Lee also does an excellent job with two large panels focusing on Luthor. They perfectly complement Landis’ dialogue and show Luthor’s drive, ego, and power. In the second image of Luthor, Lee even gives a sort of sneak peek into his brain as muddled images surround his head and his right hand reaches up to attain them. It feels like he knows what he wants to accomplish and he just has to reach out and do it. It is a truly powerful image of a very powerful and motivated individual.

June Chung’s coloring is solid. She uses a subdued color palette for the most part, although during one scene she does brighten it up, accentuating the exuberance of young life. She does an excellent job with her lighting. She makes Metropolis look absolutely majestic with the sun hiding behind the buildings, giving the overall city a glow. It conjures up Reagan’s “shining city upon a hill.” She absolutely kills it during the Luthor scene as she turns the background from an orange-yellowish mix in one panel to a dark red in the next showing Luthor’s anger. She goes so far as to even color Luthor’s skin red, really displaying the anger just emanating from him.

[easyazon_link identifier=”B01BFO23K4″ locale=”US” tag=”bounintocomi-20″]Superman: American Alien #4[/easyazon_link] captures DC’s iconic characters, but also makes you think about them and what they mean to us as readers. Jae Lee’s art is gorgeous and his Luthor panels are absolutely phenomenal. This book may just set the bar for Clark Kent’s first day in Metropolis, it was that good.