Red Sonja sets off to discover why emigrants are being attacked for fleeing their country. Her path leads her straight to the new King of Hyrkania. How does it fare?

[easyazon_link identifier=”B01BU0PB1G” locale=”US” tag=”bounintocomi-20″]Red Sonja #2[/easyazon_link] continues to struggle. However, unlike the first issue where you were bored to tears, the struggle in this issue is more technical in nature. The first line of the book is a clear red flag with Marguerite Bennett’s dialogue seemingly having an aside embedded within it. You will have to read it three or four times before you actually understand it. To make matters worse, the dialogue doesn’t even line up with Aneke’s artwork. Red Sonja shouts, “I would not spill the blood of my own countrymen.” However, she is doing exactly that. Blood sprays in an arc above her head as her sword exits a fresh chest wound.

The opening action sequence doesn’t improve from there. Aneke’s artwork is chaotic and many of the panels look out of place. For instance, on the second page Aneke depicts Red Sonja fleeing into the woods, but then in an inset panel her boots are making contact with a solider’s head. It doesn’t really make any sense and it is extremely difficult to follow. There are even panels right next to each other where Sonja is being dragged by her hair in the first one, and then randomly she has her legs around the soldier’s throat, choking him to death in the next panel. 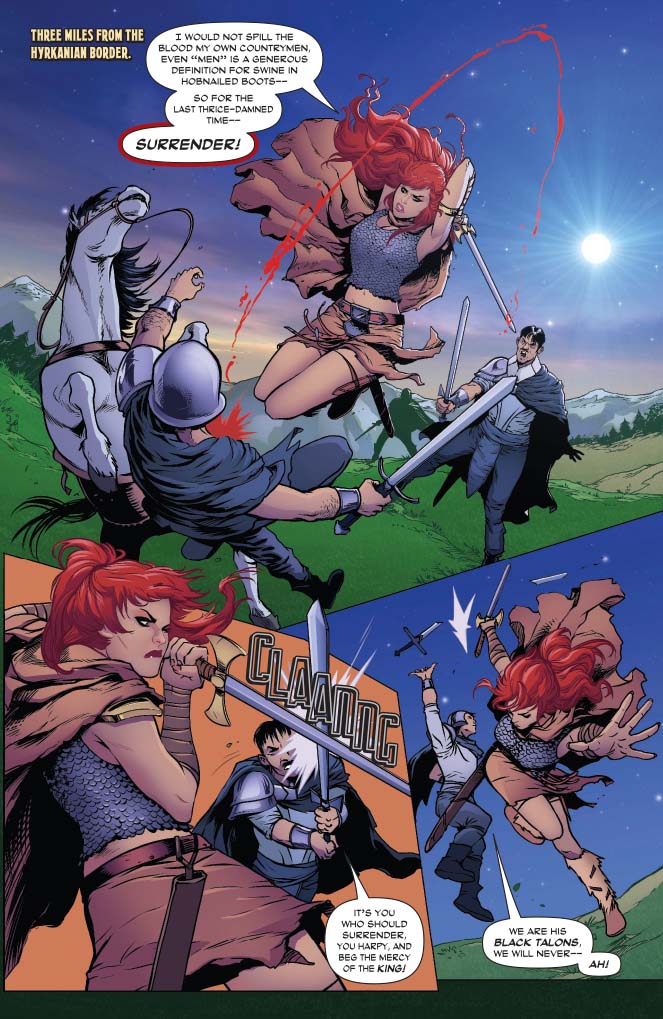 Fortunately, the second sequence is a vast improvement on the first. Bennett’s dialogue is tight and does an excellent job of characterizing a number of new characters. Bennett really leverages the dialogue to provide exposition, while also detailing the current troubles in the land. There is an interesting critique of Sonja that Bennett teases, but she doesn’t really go anywhere with it. Instead, she decides to refocus it on different social critiques: xenophobia and democracy. It can be a little dramatic, but it works given the setting in which the scene takes place. The scene does end on a rather odd note, mainly because Bennett and Aneke decided to remove the build-up of tension and pushed forward into the next scene. It is unfortunate because there was promise of a decent rivalry.

The book closes with an interesting plot turn revealing the identity of the new King of Hyrkania. It paves the way for a number of different story paths and provides an excellent cliffhanger as you wonder how Red Sonja will react to not only this information, but the King’s actions upon reuniting with her.

Aneke’s artwork was difficult to follow, especially in the opening sequence. However, it improved as the story went along and the action sequence in the second scene was much easier to follow. It made sense when one panel would show a knife cutting through a rope and the next panel would show a chandelier coming crashing to the ground.

There could have been a little more detail in the script handed to one of the new characters, Midyan. Instead, there is maybe one line that channels a tirade from Midyan. Although in a subsequent panel there are a couple more lines, they don’t extend down the page, stopping where Midyan’s thumb makes contact with the script. 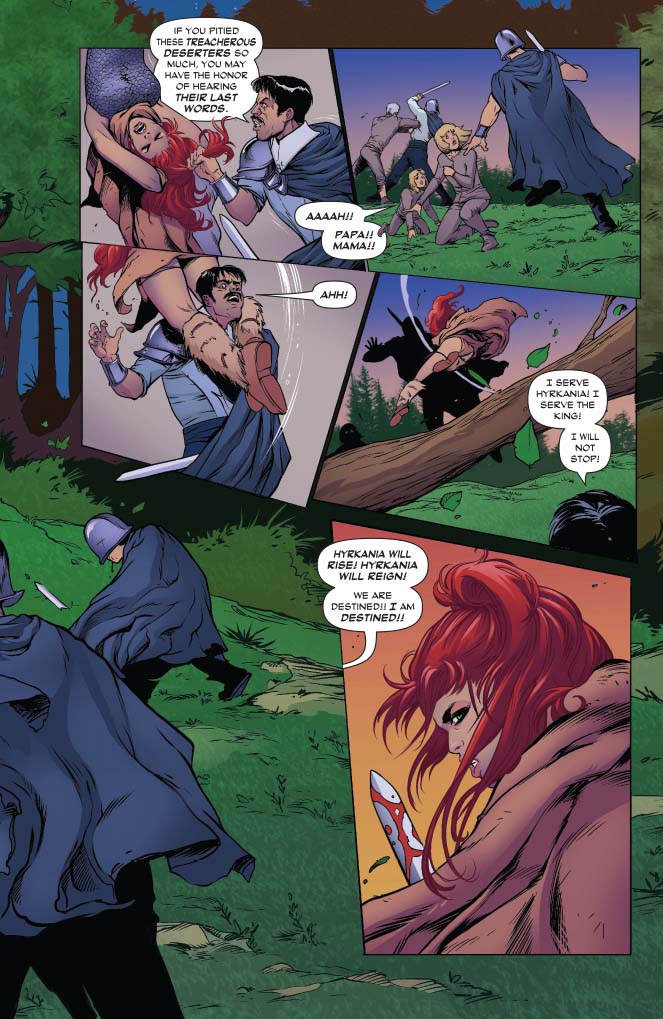 Aneke’s facial expressions are pretty solid; the last page does an excellent job of capturing how Red Sonja’s attitude shifts with just small changes to the eyes and eyebrows. Aneke uses this technique throughout the book and usually accompanies it with a change to a character’s mouth. There are some panels where it doesn’t work out as well and a character’s mouth looks like it was stuck on like Mr. Potato Head.

Jorge Sutil’s colors set the tone of the book. The colors are more muted when Red Sonja is in combat facing down the King’s men. It becomes much brighter upon her victory, highlighting that the good gal won. He also uses a spotlight technique to highlight a panel. In the panel, he has rays of light showering down from the sun on the third panel of the page. It really draws your eyes to the panel.

[easyazon_link identifier=”B01BU0PB1G” locale=”US” tag=”bounintocomi-20″]Red Sonja #2[/easyazon_link] struggles out of the gate, finds its legs a little bit in the second sequence, and opens up a number of different story paths in the third sequence. The opening action sequence was confusing and it was hard to follow exactly was happening. Luckily, Aneke corrects this problem in the next action sequence and makes it easy to follow. The dialogue can still be a little choppy and overdramatic, but it gets the job done. The book had a number of mistakes, but the story did have some promising moments.