As we were on our way out of the VA COMICON, we stopped by Chuck Paschall’s booth noticing his array of unique t-shirts and sweatshirts, but what really caught our eye was Chuck’s Native Drums comic display. We decided to stop in and ask him a few questions about it.

BiC: How’s it going? Could you tell us a little bit about yourself and who you are and about your comic, Native Drums.

Chuck: Sure. I’m Chuck Paschall. I’m the writer of Native Drums. It’s an on-going series that we’ve been working on for about four years. The first issue previewed at San Diego Comic Con in 2000 something. It all blends together.

BiC: Can you tell us a little bit about the story?

Chuck: Sure. It’s basic kind of preamble to the apocalypse. It takes place in Central Africa. An agent is on a mission when she decides to help a little girl. When she does that all the militia and warlords and all that stuff start coming for her. They chase her through Central Congo for most of it.

BiC: Can you tell us about the main characters? One has purple hair, one has red hair.

Chuck: The purple-haired character is actually the villain. She is kind of a counter to the agent. We never refer to them by names. They are always referred to as agent. The counter-agent never has a name because she works independently. One side is empathy and one side is apathy. That’s what the real middle of the story is. Our agent is warm and caring and helps people. While the counter-agent is like I’ll kill whoever is in my way, doesn’t matter. It’s kind of Ghost in the Shell ish. They both have communications with people you never see all through satellites and communication arrays. They also have cyber powers in a way. They have robots that operate on them so they heal quickly and they can run fast.

BiC: So there is some advanced technology happening?

Chuck: Yea. I never want to say what the time frame, but it’s supposed to be in the later 2100s as far as technology goes. There is a lot of old technology in it because its supposed to take place in Africa so people are still using cars with gas and stuff, but you will see a big, tall drop ship that works off solar power and things like that.

BiC: That is pretty cool. How many issues do you have out right now?

Chuck: There are five issues. We are working on the sixth issue now which is more of a collection of new stories based on the same world. The little girl from the first book grows up and she acts as an agent in Central Africa to stop poachers

It’s been a long process because [Vince Riley, the artist’s] normal day job is video games. He is a video game developer. It’s taken a long time to get his stuff for each issue. If you look at the first issue. He did it a very specific way. he did it all on A2 paper and then he scanned it, inked it digitally, colored it digitally and then he sort of taken classes to do the full boards. Issue 2 it’s full page, full board comics. He inked it by hand. Issue 3 he also inked it by hand. By issue 4 and 5 he learned enough that he is going back to do all digital so it will be faster. You might see the difference in how issue 1 looks a little more watercolory.

BiC: I can definitely see that. Do you ever show the animals being killed? The Poachers killing the animals?

Chuck: No. That never happens. Her uncle in the comics tends a genetic modified rhin herd and he’s the guy who saves her by the end of issue 5. When she grows up she learns from him. In the one-shot story we are doing she goes and stops people poaching apes.

BiC: Is that something you are passionate about? Protecting African wildlife?

Chuck: African wildlife? No, most wildlife. But it’s not the focus of the comic. 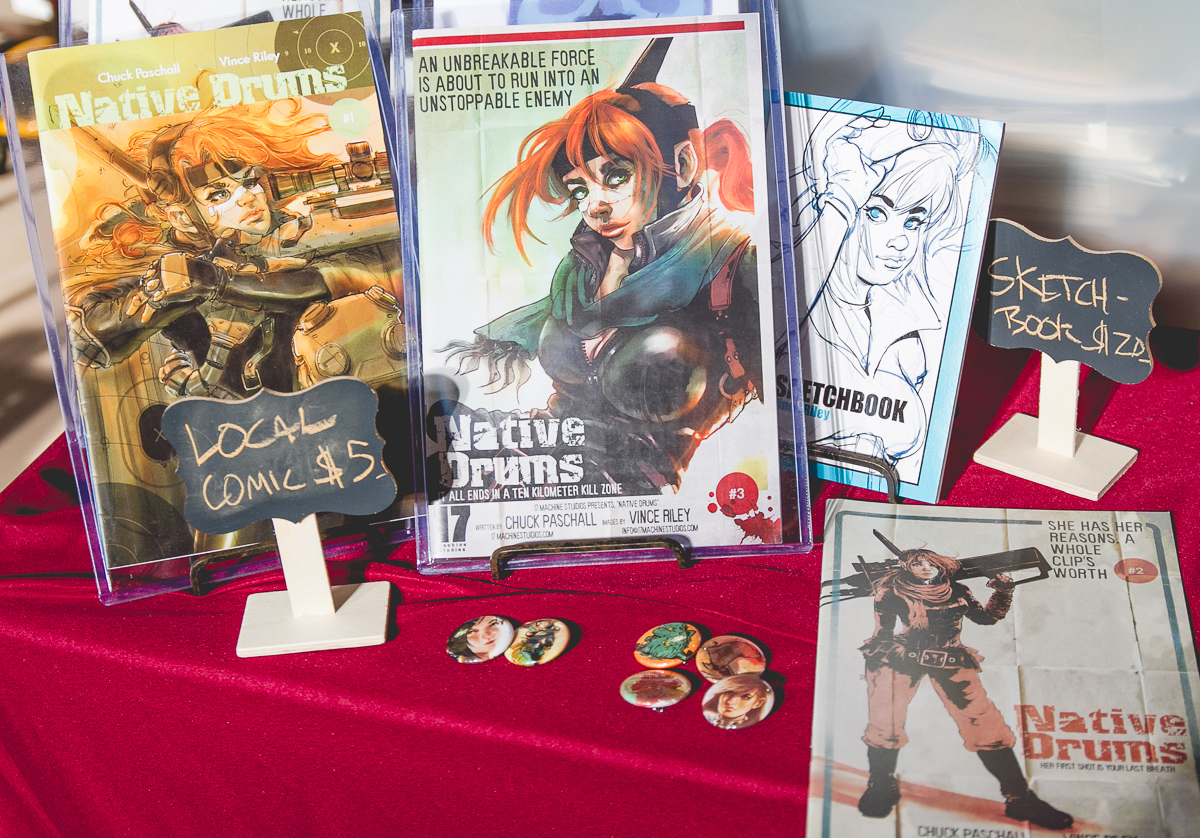 BiC: Can you tell us a little bit about your writing procedures, how do you go about writing your stories?

Chuck: I use CeltX; it is a screenwriting software and there is a comic template in it. I pretty much watch a lot of Ghost in the Shell and then I start writing so I get a little flavored by it. Any sort of mind-numbing anime.

BiC: You are big anime fan, you’ve referenced Ghost in the Shell is that your favorite?

Chuck: I’m not a big anime fan. I just like certain shows.

BiC: It looks like you do a lot T-shirt sales?

Chuck: That’s my money and this is what I do. Vince has done a lot of covers for IDW and Archie, you’ve probably seen his Galaxy Quest. He did a cover for Mega Man and Sonic for Archie.

BiC: If we aren’t at VA COMICON, where can we get it online?

BiC: Do you want to tell us a little bit about 17 machine studios?

Chuck: 17 Machine Studios is Vince Riley, he’s the artist. He is based out of San Francisco, California. It’s his studio. It’s his deal.

BiC: Thanks for chatting with us. Enjoy the rest of the show.