Everyone’s favorite “one ugly mother f***er” makes its return to comics with this short series, which brings in the whole Xenoverse (the Alien, Predator, and Prometheus franchises) for a fun and engaging (yet fairly derivative) story.

The plot setup for [easyazon_link identifier=”B01BI5D2O6″ locale=”US” tag=”bounintocomi-20″]Predator: Life and Death #1[/easyazon_link] is similar to what we have come to expect from this universe: a hardened military unit is sent to a distant planet by the villainous Weyland-Yutani corporation for an ambiguous but “routine” peacekeeping mission to defend W-Y property. This set up is essentially a mashup of the plots of the original Alien and Predator films. As can be expected, their mission goes to hell when they land on the planet and discover that everything is not as it seems or as they were informed.

The initial setup is established by Lorimer, a Weyland-Yutani representative, describing the mission to the Captain in a fairly expository fashion. After this we are introduced to the squad, whose dialogue is incredibly natural. Their banter can be a little hard to follow at first, with their jargon and frequent interruptions. While this slightly affected initial clarity, it gives the reader a sense of voyeurism, looking in on an already tight knit and established group, with their own interpersonal dynamics. The squad followed familiar tropes, specifically those from Aliens, with a hardened leader, a sarcastic wildcard, and a plethora of tough guys. 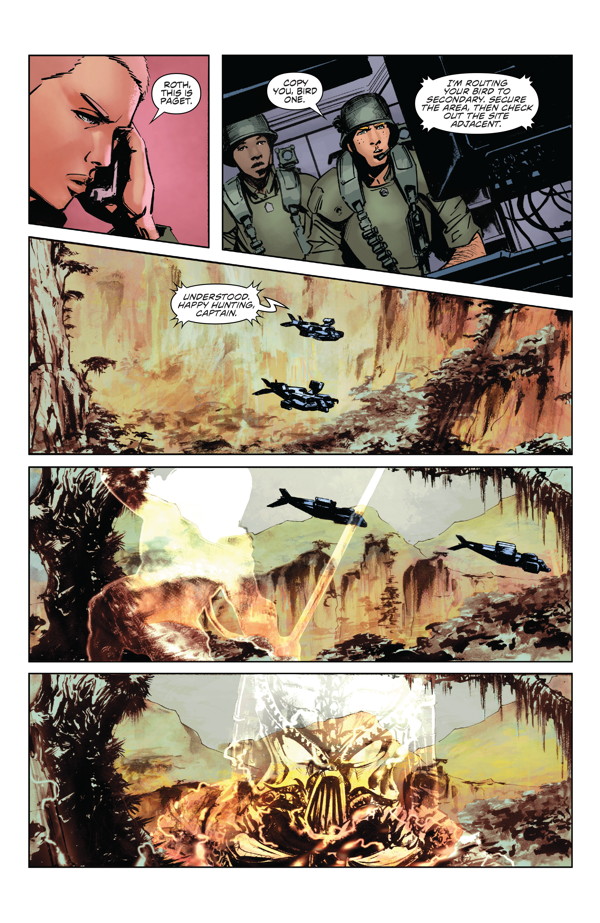 You definitely get a “cannon fodder” vibe from some of the soldiers, but that is to be expected in an AVP story. I will say though that there is not much to connect with emotionally as far as these characters are concerned, with no sort of character such as an Ellen Ripley (or even Arnold Schwarzenegger) to let the reader identify or particularly care about. The Predators themselves are seen in a limited capacity, but their presence and motives will almost obviously be expanded upon in further issues. That being said, the little that we do see of them is awesome and incredibly intense.

The penciling is immediate and unambiguous, following a “less is more” strategy, with spacious backgrounds that are not overly busy. The inking on the other hand is incredibly attention grabbing. There is a significant contrast between the cold and claustrophobic colors in the natural world on the planet Tartarus, which is incredibly lush and at times looks like a watercolor painting.

This issue shamelessly retreads familiar territory, but in a world with TWO regrettable AVP films, sticking to the guns of the franchise was a good call for a way to kick this series off. Now that the story’s initial plot has been established and we have seen the first taste of chaos break out, I’m incredibly excited to see where it goes. I believe they will integrate the Prometheus mythology, which will create a serious shift in the series. It will take it from feeling at times like a “cover song” into something more unique and dynamic. 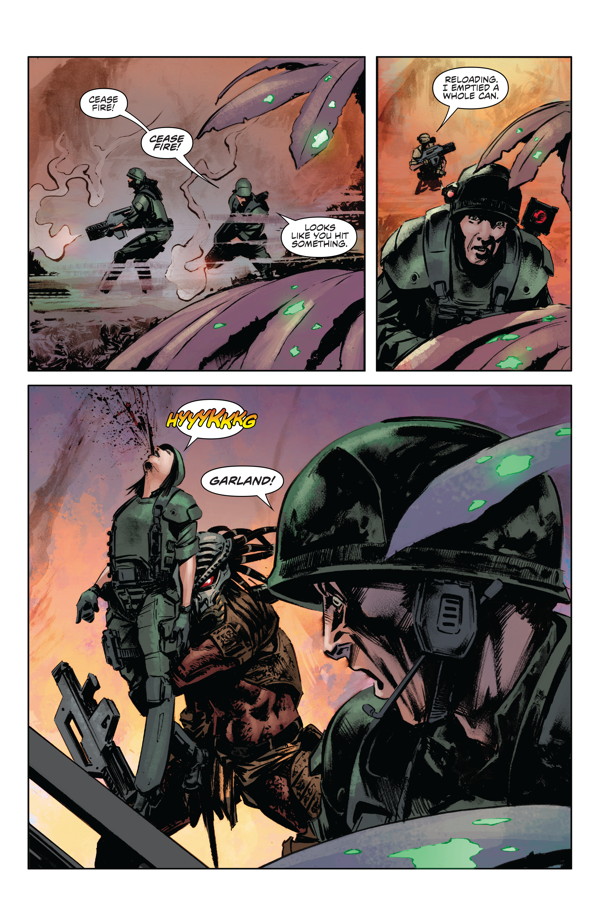 Overall [easyazon_link identifier=”B01BI5D2O6″ locale=”US” tag=”bounintocomi-20″]Predator: Life and Death #1[/easyazon_link] is a very fun introductory issue. It essentially seems like a comic that is strictly for the AVP diehard fans, giving proper amounts of fan-service. This could have dragged the story down to sheer redundancy, but when the inevitable explosion of violence breaks out with the introduction of the Predators, I couldn’t keep a smile off my face. This story gave me everything I love about the Predator franchise, in all of it’s bloodsoaked glory.