Dejah Thoris continues on her mission to discover the secret history about her past while John Carter plays politics awaiting the return of his love. How does it fare?

[easyazon_link identifier=”B01BL5B4NY” locale=”US” tag=”bounintocomi-20″]Dejah Thoris #2[/easyazon_link] continues the slow pace of the first issue that is somehow even slower in a worse way. In the first issue we at least had some decent scenes of Dejah fending off attackers or teasing her combat skills in a military training camp. None of this is even whispered at until the very end when Dejah finally makes it to the military camp.

With the lack of action, you expect a solid character-driven story and writer Frank J. Barbiere does let you inside Dejah’s head; however, much of it was already made apparent in the first issue and is quite a bit of repetition. The characterization also seems dishonest to the actual story from the first issue. Dejah refers to herself as a just ruler. The problem is, based on the previous issue, she has never actually been a leader. Instead, her father ruled and had been subsequently usurped. 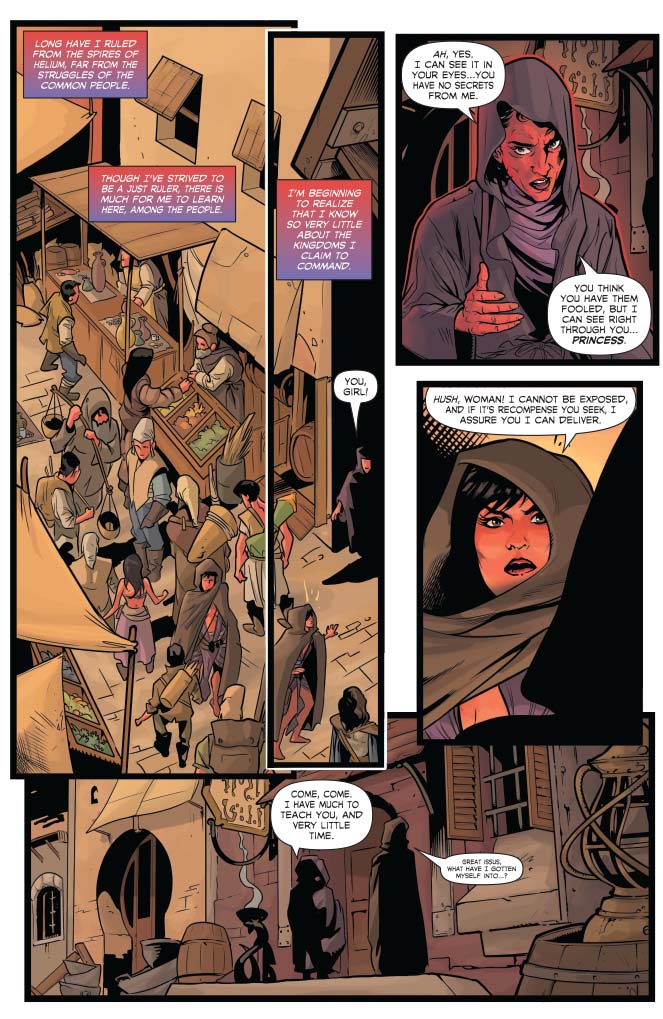 The plot is also moved along with chance encounters with characters who are so unimportant to the actual story they don’t even get a name. Barbiere attempts to make the transition a little softer with a line of dialogue about an “old friend,” but it is unclear exactly who this old friend could be and just makes the entire encounter feel forced. Barbiere also struggles with the characterization of Dejah in this scene. She gladly opens up to this complete stranger, someone who could be one of her enemies. It is almost as if she didn’t learn anything about trusting people from the last issue.

Barbiere struggles with depicting the hardships of the common man on Barsoom. Don’t get me wrong, he does a good job of scripting the hardships they face and showing the power of the royal guard. The problem arises because the resentment is supposed to be directed towards the current regime of Helium. Except, the coup happened only a day or so ago. Many of these common people would not have even been touched by it. Thus, the resentment would be towards Dejah’s father. The common people also don’t even question why the police are searching for Dejah. The entire encounter just doesn’t seem believable and a lot of that falls on artist Francesco Manna for not actually showing the royal guard manhandling the common people or putting them down. The dialogue doesn’t match up with the actual pictures on the page. 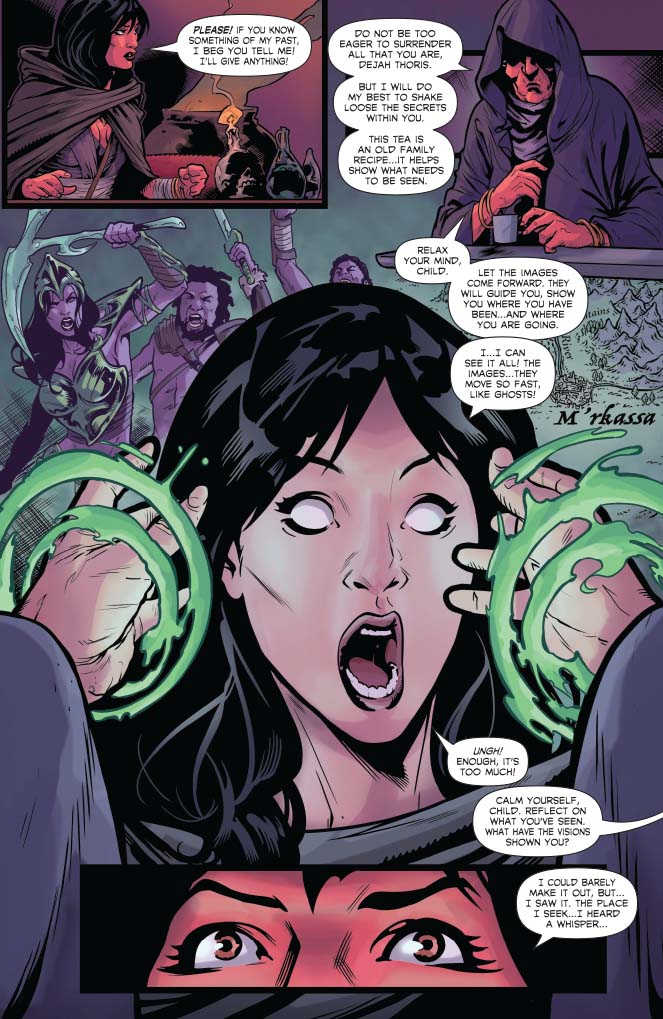 Manna’s artwork is serviceable. For some reason, he liked to use a number of panels where he zoomed in on Dejah’s eyes. In the aforementioned case about the royal guard and the common people, it takes up a pretty big space where he could have and should have added the royal guard abusing their power. A lot of the panels feel static. Barsoom loses its exotic appeal. We don’t even get to see any strong emotions on the characters’ faces. There is even one sequence where Barbiere describes a number of images rushing past in a vision, but Manna only shows us two easily discernible images. It lacks effort and creativity.

[easyazon_link identifier=”B01BL5B4NY” locale=”US” tag=”bounintocomi-20″]Dejah Thoris #2[/easyazon_link] adds on to the struggles of the first issue with continuity problems, dialogue that doesn’t match up with art work, and an overall bland art style that has way too many filler panels depicting random people who have no real impact on the story at all. There is even conflicting characterization regarding Dejah from the first issue. It all adds up to a boring and bad second issue that doesn’t look to have any hope of improving moving forward.