Vampirella, her werewolf lover Tristan, and her chauffeur Coleridge move into Hollywood Hills, California and encounter the craziness of social media, not to mention they stumble across a casting director who keeps Hollywood Horrific. How does it fare?

[easyazon_link identifier=”B01BL5EZBM” locale=”US” tag=”bounintocomi-20″]Vampirella #1[/easyazon_link] begins with a solid hook. Kate Leth scripts out a more or less benign activity and overtly hints that something terrible is going to happen. It does a great job of hinting at the evil nature of the villains and giving us a glimpse at what Vampirella and her allies will be up against. Leth and artist Eman Casallos make sure they don’t give everything away, ending the scene before we get to see the true horror they will be facing.

In the next scene, Leth and Casallos focus on characterizing Vampirella, Tristan, and Coleridge while introducing them to their new abode. Coleridge comes off as an Alfred type, although Vampirella does hint he is more than he looks. The focus of the characterization is on Tristan and Vampirella’s relationship. Leth does a really good job of humanizing them with playful flirtations and one scene with some straight up seduction that includes some solid fan service.

However, Leth’s ability to connect Vampirella with the villains comes off as completely forced. There is no rhyme or reason for the two coming into contact.There is no explanation for the occurrence; it just happens to make Vampirella aware of the villains. To make matters worse, there is a random cell phone video of the entire sequence that moves the story forward. This isn’t explained either; it just happens and it happens after Coleridge explains how remote their new home is. There is really no one around, so much so that Vampirella quips about how Tristan’s howls won’t even be heard. 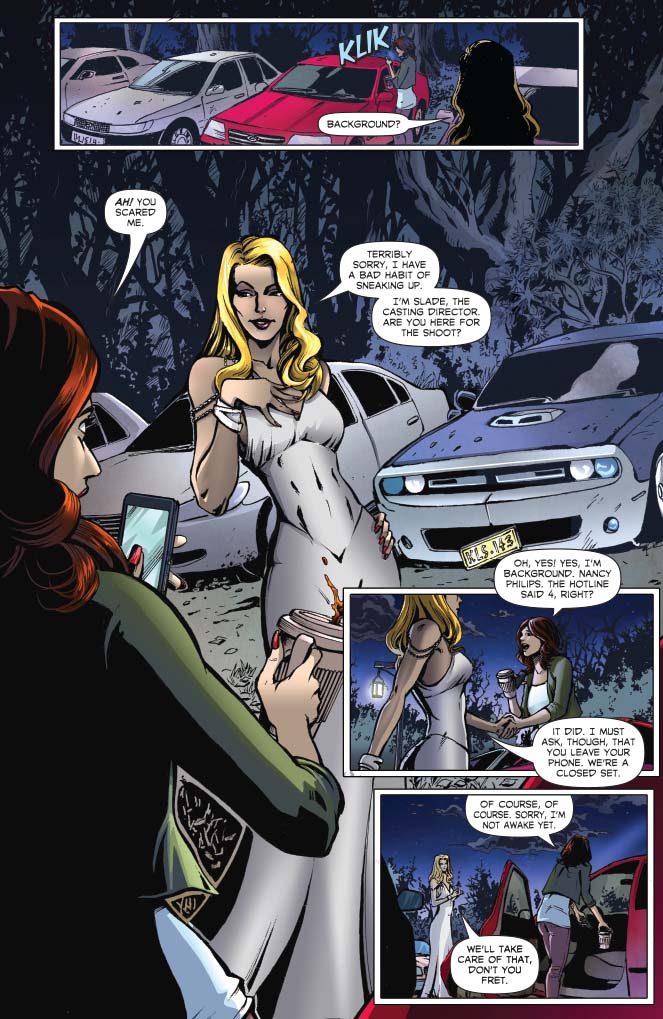 This pattern of moving the plot forward with random occurrences continues when Vampirella and Tristan head to a Hollywood bar. Apparently, Vampirella has figured out that Slade’s people hang out at this bar after only being in the United States for a little over three hours. It just doesn’t make sense and Leth really tests how much you can suspend your disbelief. Leth’s dialogue doesn’t even make sense in some of these sequences. In one instance, Vampirella says, “Surprise. Bet you thought you’d seen the last of me.” Except the person who she is talking to has never even seen her before.

Leth also decides to draw attention to Vampirella’s new outfit in the dialogue; however, the explanation makes about as much sense as why she is going to this random bar. This dialogue is even worse given the fact that Leth actually gives a valid explanation for the outfit change with the social media attention, but she forgoes to use it.

Eman Casallos’ art is solid. He excels at facial expressions whether it is Vampirella flirting with her eyes as she looks over her sunglasses or Tristan looking absolutely wolfish in responding. He does use a lot of white space in many of his sequential panels, however, those white spaces don’t really make sense or add anything to the visual experience. Instead, they are somewhat distracting and take away from some stunning panels. 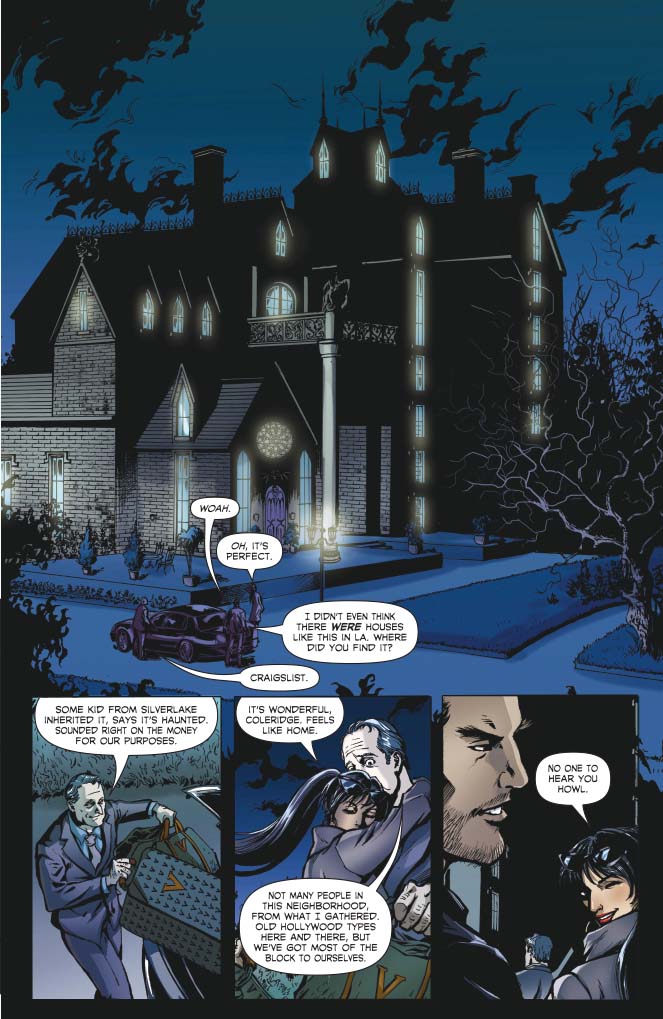 The action sequences make you suspend your disbelief. In one sequence an invader is straight kicked in the gut and goes flying out the window. However, in the subsequent panel it shows the same person leaping away as if he never took a hit to the gut. There are a number of other continuity issues, especially with the social media piece depicting Vampirella standing over a dead body when the body had clearly disintegrated in the previous panels.

[easyazon_link identifier=”B01BL5EZBM” locale=”US” tag=”bounintocomi-20″]Vampirella #1[/easyazon_link] starts off well, but quickly gets off track with continuity issues, forced plot progression, and out-of-place dialogue. There is a decent story hidden behind all of these issues, but as it stands there are just way too many errors. There is even a spelling error that would describe Vampirella’s chauffeur as a chauffer, or a portable stove. You should skip Vampirella #1.