Valiant will be hitting the Chicago Comics and Entertainment Expo 2016 (C2E2) between Friday, March 18 through Sunday, March 20th with an armada of convention-only exclusives, signings, programming, panels, and the official debut of the Archer & Armstrong American Pale with Arcade Brewery.

Valiant will be at Booth #317 inside Chicago’s McCormick Place with a complete selection of Valiant trade paperbacks and deluxe hardcovers including X-O Manowar, Bloodshot Reborn, Imperium, Book of Death, The Death-Defying Doctor Mirage, Rai, and more. They will also have a ton of merchandise including t-shirts, official Valiant tote bags, and more.

Valiant will also have a C2E2 variant cover from Katie Cook for A&A: The Adventures of Archer & Armstrong #1.

There will also be three different panel discussions starting off on Friday, March 18th at 1:45 p.m. CT with Valiant 101: New Fans Start Here in Panel Room #S405b. It will provide you with a concise and fun-filled introduction to Valiant’s characters.

This will be followed up on Saturday, March 19th at 12:30 p.m. CT in Room #S402 for the Valiant: A&A – The Adventures of Archer & Armstrong Spotlight. Writer Rafer Roberts will reveal the sordid life and times of Valiant’s immortal roustabout adventurer and his infinitely naive marksman partner. This will be an exclusive one-on-one Q&A with the brains behind A&A’s new adventures.

The last panel will take place just two hours later on Saturday, March 19 at 2:45 p.m. CT in Panel Room #S405b for Valiant: 4001 A.D. and Beyond. An exclusive panel presentation with an all-star cast of Valiant staff and creators will discuss the blockbuster crossover event of the summer as the showdown between Rai and the forces of New Japan gear up for an epic showdown. There will also be new and announcements concerning Archer & Armstrong, Bloodshot Reborn, Divinity, Faith, Ninjak, X-O Manowar, and more. 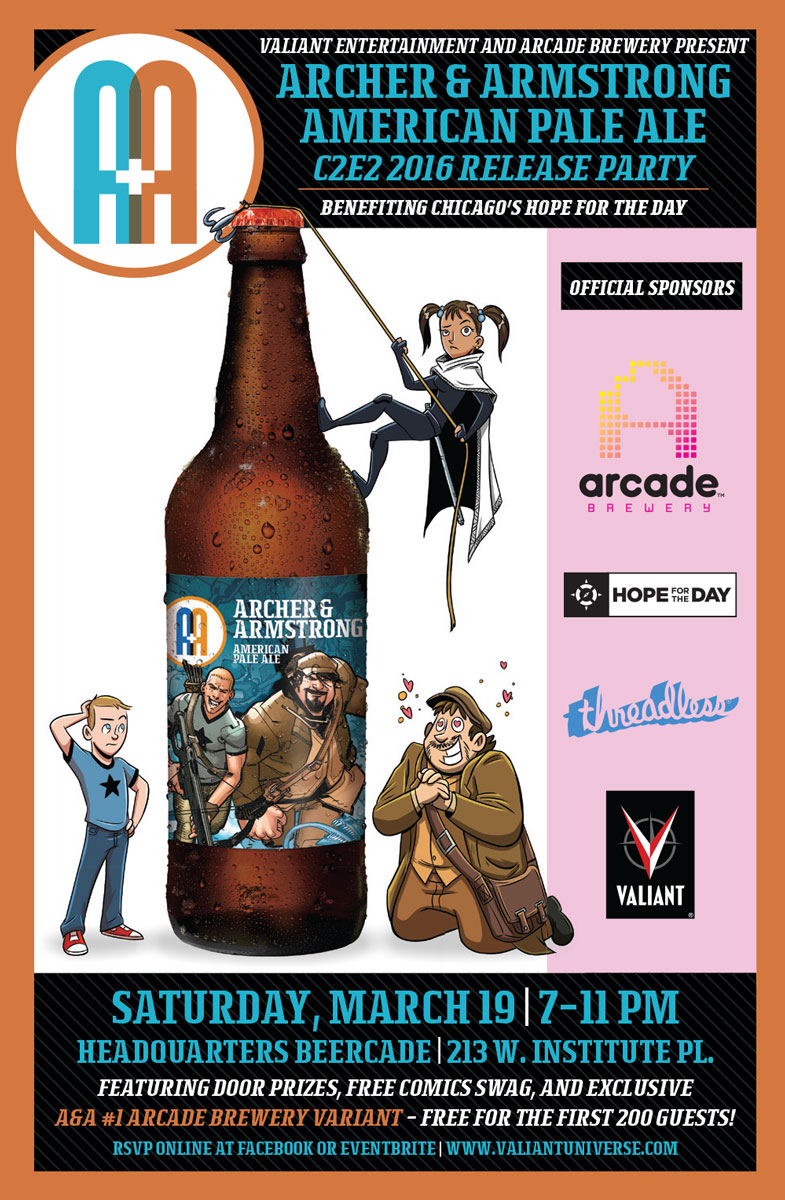 Finally, Valiant will be throwing an after party in association with Arcade Brewery, Threadless, and Hope for the Day as they reveal the Archer & Armstrong American Pale. The Official Release Party begins at 8:00 p.m. CT at the Headquarters Beercade’s River North location (213 W. Institute Pl. Chicago, IL 60610). Party goers will receive a special Arcade Brewery variant cover as well as be entered for a door prize drawing for a bottomless satchel full of A&A treasures including a complete set of Archer & Armstrong trade paperbacks, a sketch cover by Rafer Robers, official Archer & Armstrong swag, and more.